What kind of person are you? Are you a healthy eater who can’t live without vegetable on a dinner table or are you someone who indulge to fast food temptation? Well, whatever it is, we’re sure that you will love our compilation of funny jokes about food.

Food always bring people together and so are the jokes! We hope you are hungry for some hilarious food jokes and puns.

If you love to read more jokes, check out these funny jokes for adults.

You can also have a look at our dad jokes and mom jokes for your amusement while enjoying dinner with your family!

Who doesn’t like food? Admit it! It will always be our guilty pleasure. Food creates a sensation of incredible feeling and positive vibes. No wonder we love every kind of it – from junk foods to healthy options. If you are looking for some fun while eating your favourite snacks, look no further because we have a compilation of jokes about food and drink.

Read more: Yummy and funny food jokes for friends and families to enjoy

Why did the tomato blush?
Because it saw the salad dressing. 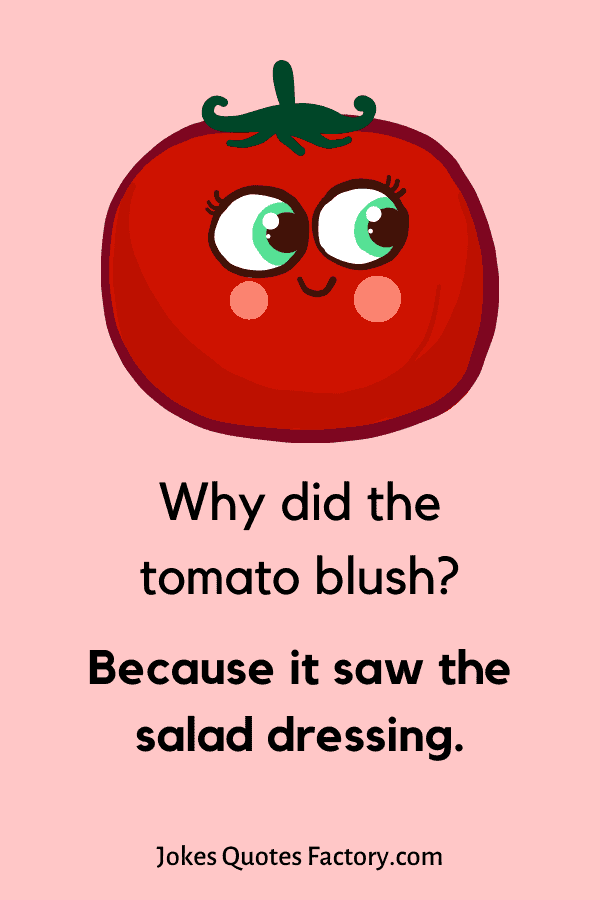 Did you hear the one about the greedy peanut butter?
I’m not telling you. You might spread it.

What do you get if you cross an apple with a shell fish?
A crab apple!

Why don’t chickens play sports?
Because they hit fowl balls

Read more: Funny Chicken Jokes That Are So EGGS-citing!

I hope you find inner peas.

This may sound bananas but I find you a-peeling. 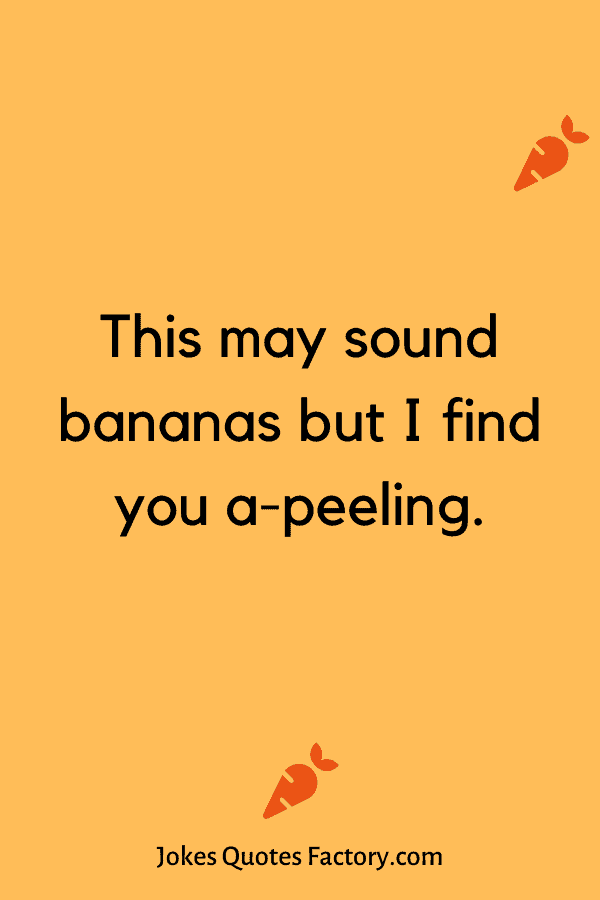 Penne for your thoughts. 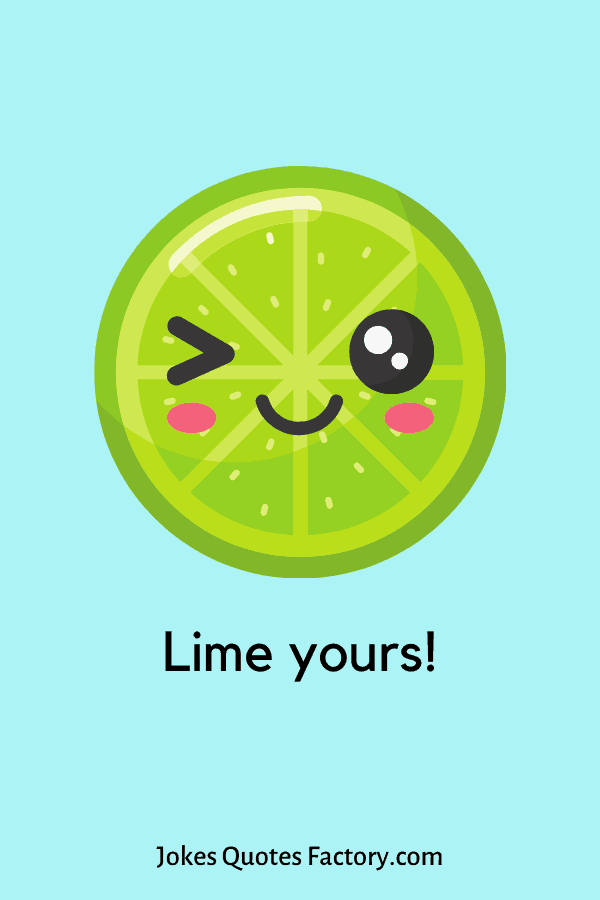 Have an egg-cellent day!

You butter believe it.

Need more Monday jokes? We got you!

Becoming a vegetarian is a huge missed steak. 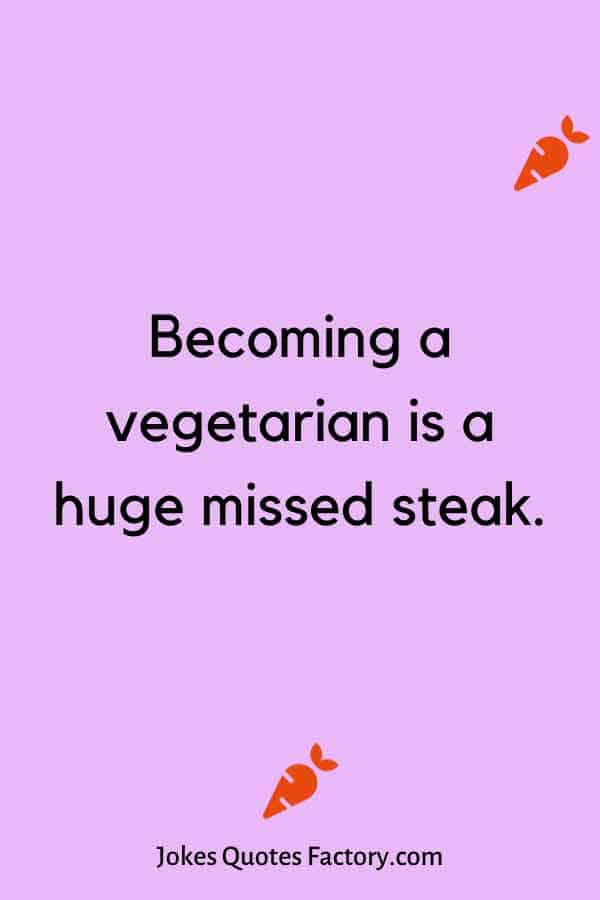 The path of yeast resistance.

Another one beats the crust.

Love to share one-liners to your friends? We think you’ll love the jokes that we are about to show you. Treat yourself with our yummy and delicious jokes that will leave you hungry for more.

Not saying I live in a rough area but just bought an advent calendar and half the windows are boarded up!

The majority of Americans find bananas a peeling.

I hope when I inevitably choke to death on gummy bears people just say I was killed by bears and leave it at that.

Just burned 2,000 calories. That’s the last time I leave brownies in the oven while I nap.

The dinner I was cooking for my family was going to be a surprise but the fire trucks ruined it.

Entered what I ate today into my new fitness app and it just sent an ambulance to my house.

I would request a last meal of soda and pop rocks so I could die on my own terms.

If you believe that the quickest way to a man’s heart is the stomach, you know that you are aiming a little too high.

Your name must be Coca Cola, because you’re so-da-licious

My girlfriend’s such a bad cook, she uses the smoke alarm as a timer.

Baby, if you were a fruit you’d be a fine-apple.

If you enjoy arguing about lunches at 6 AM I can’t recommend parenting highly enough.

I’m not a doctor but I know adding cheese to anything makes it an antidepressant. 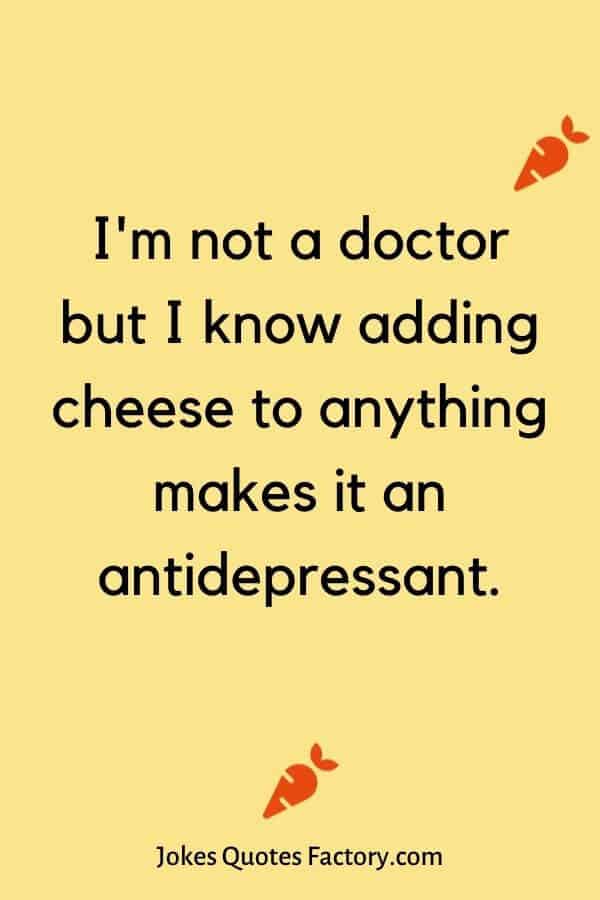 My boyfriend said he didn’t have a date that same day I caught him eating one.

Up until I bought this bag of chips I thought the air was free.

Never ask a woman who is eating ice cream straight from the carton how she’s doing.

Justice is a dish best served cold because if it were served warm, it would be just water.

Ice hockey is basically just guys wearing knife shoes fighting each other with long sticks for the last Oreo.

Whenever my wife packs me a salad for lunch all I wanna know is what I did wrong.

So far eating hasn’t filled the emptiness I feel inside, but I’m no quitter.

Having nutrition information on a bag of Cheetos is like having dating tips on a box of Crocs. 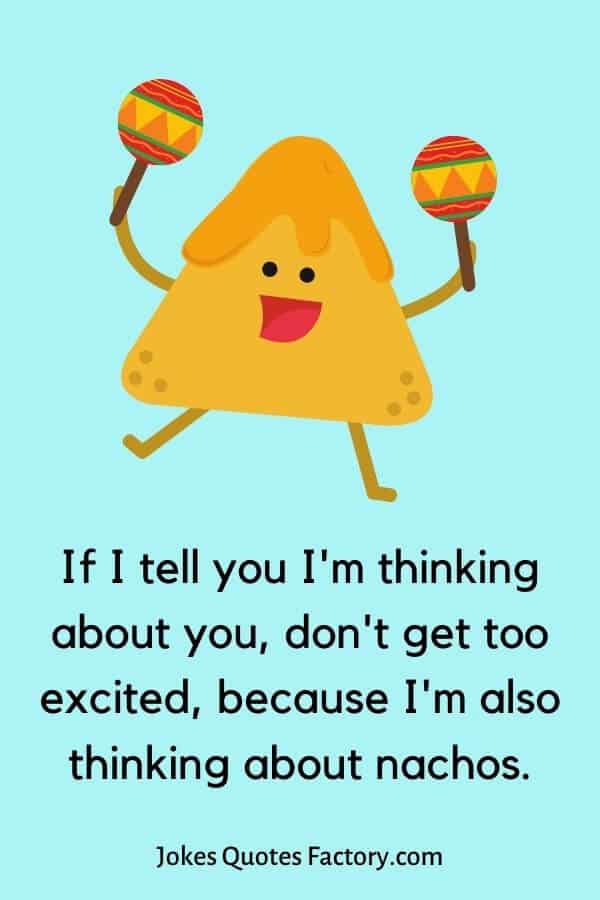 You wouldn’t want to miss the knock knock jokes about cooking and food that we found! You will definitely dream about your next meal because of this. Bon appetite!

Knock, knock!
Who’s there?
Mayonnaise.
Mayonnaise who?
Mayonnaise have seen the glory of the coming of the lord…

Knock, knock!
Who’s there?
Noah.
Noah who?
Noah good place we could go to eat?

Knock, knock!
Who’s there?
Noah.
Noah who?
Noah good place we can get something to eat?

Knock, knock!
Who’s there?
Orange.
Orange who?
Orange you glad to see me?

Knock, knock!
Who’s there?
Oswald.
Oswald who?
Oswald my chewing gum by mistake!

Knock, knock!
Who’s there?
Peanut.
Peanut who?
Peanut going down a slide! 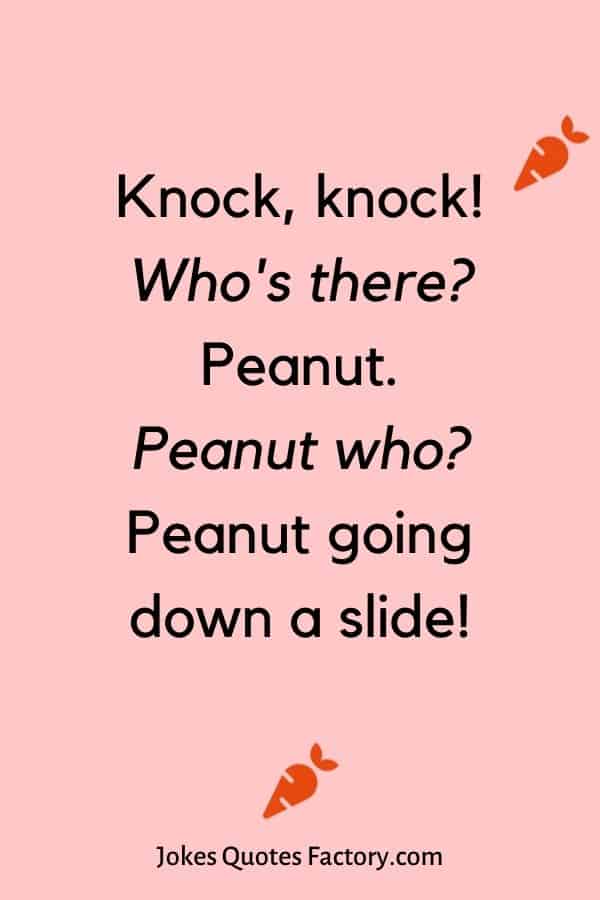 Knock, knock!
Who’s there?
Peas.
Peas who?
Peas of the rock!

Knock, knock!
Who’s there?
Pete.
Pete who?
Pete-za – but you took so long I’ve already eaten it!

Knock, knock!
Who’s there?
Pudding.
Pudding who?
Pudding in your face!

Knock, knock!
Who’s there?
Theresa.
Theresa who?
Theresa fly in my soup!

Knock, knock!
Who’s there?
Turkey.
Turkey who?
Turkey to cook in the pan! 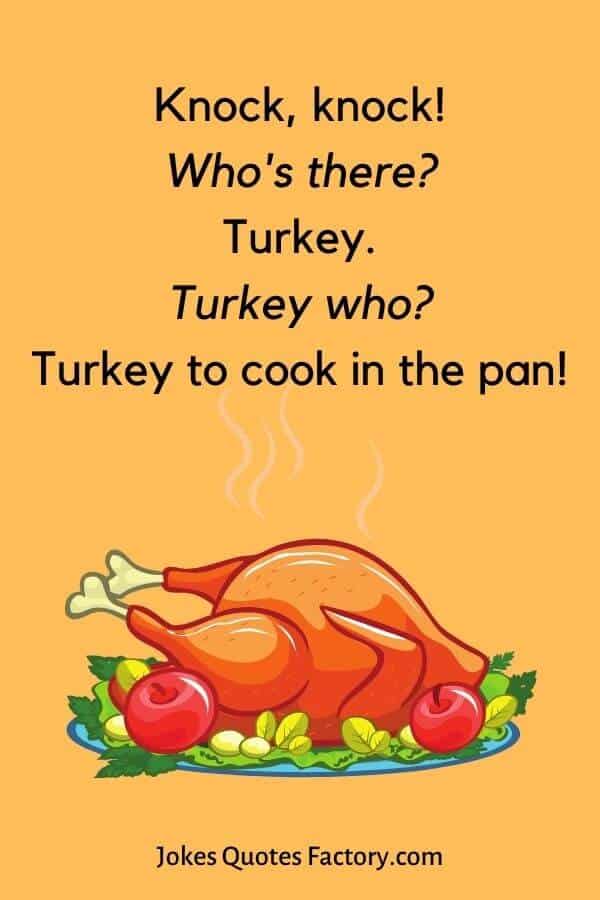 Knock, knock!
Who’s there?
Zac.
Zac who?
Zac of candy in my pocket.

There is no question that fast food can put up some weight. Good thing we have some jokes for you that will make you laugh so hard as if you exercised. Spice things up with our fast food jokes! Laugh hard and avo good day! 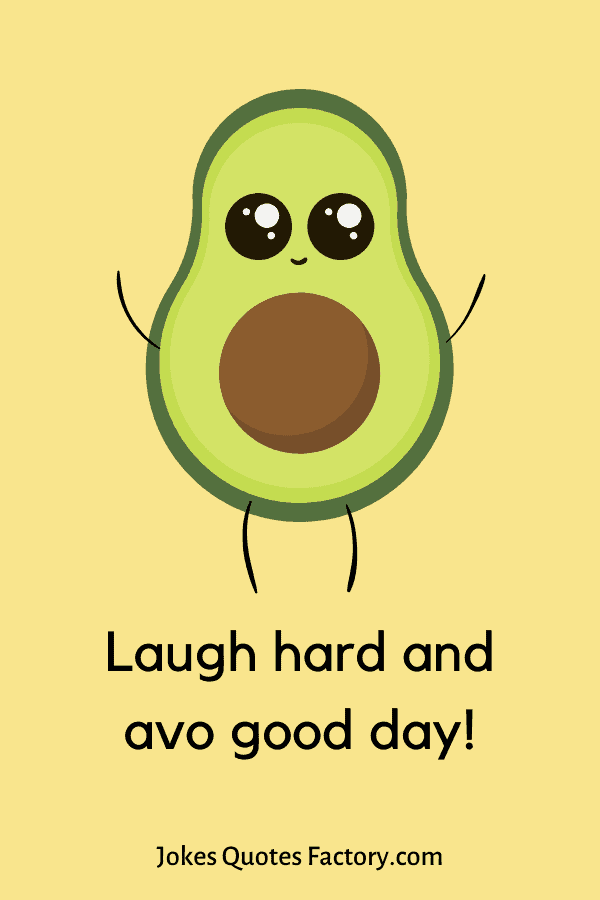 Where do monkeys go to get their fast food?
Burger Kong.

They say fast food is bad for you…
so I ate a sloth.

What do you call a fast food company that also manufactures airliners?
McDonald’s Douglas

When Hannibal gets fast food, what does he order?
A kids meal, with extra kids.

For more laughs, check our What Do You Call Jokes for Kids.

A fast food employee dropped my burger patty on the floor before serving it to me.
They said it was ground beef.

What did the pirate say when he dropped his fast food order?
Arrr! Me harteys!!!

Have you heard the movie that they’re making about fast food?
It’s getting filmed in Greece.

I have a weakness for casual fast food…
That’s why I keep a condiment in my wallet.

When a cannibal has fast food he gets...
A Samburger and French guys

Have you noticed the fast food is tastier lately?
Because the food industry workers are finally washing their hands!

I’ve got a great idea for a NBA themed Fast Food restaurant. I call it…
Shake-Shaq

What do you call a fast food chain run by slaves?
Three Guys

Everytime I eat fast food I can talk to dead people…
Maybe I should quit ordering the medium fries.

Why couldn’t the sesame seed leave the casino?
He was on a roll! 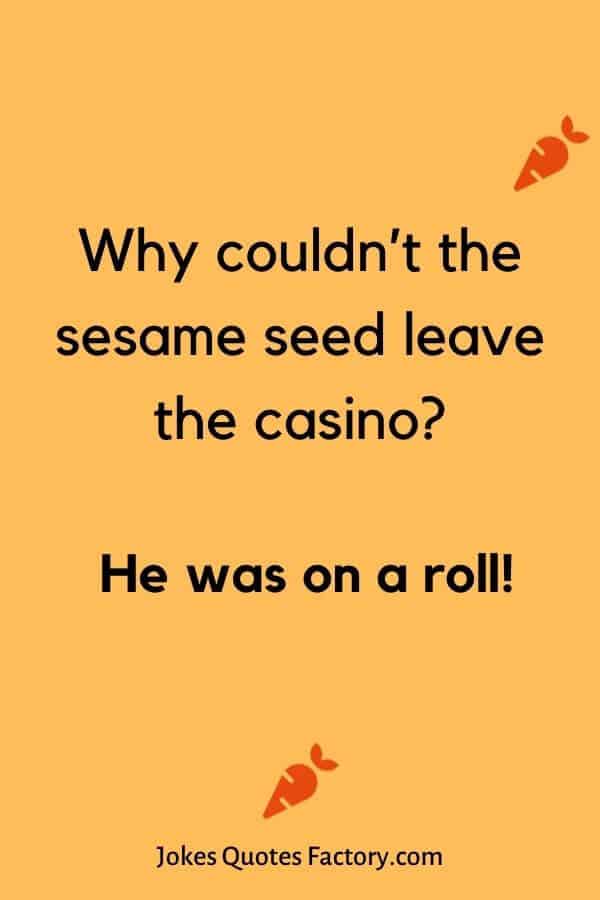 Tired of waiting for your food on a restaurant? We think that reading through these corny food jokes and sharing them with your family is the best way to fill your waiting time. Let us entertain you for a little while as you feast on the jokes that we are about to serve you!

If you’re waiting for the waiter at a restaurant…
Aren’t you the waiter?

Hear about the restaurant called karma?
There is no menu: You get what you deserve.

What is a cannibal’s favorite restaurant?
Five Guys.

What does a skeleton order at a restaurant?
SPARERIBS

Did you hear about the restaurant on the moon?
Great food, No atmosphere.

Waitress: You wanna box for your leftovers?
Me: No, but I’ll arm wrestle you for the bill.

There is only one thing I don’t like about ordering duck in a Chinese restaurant…
The bill. 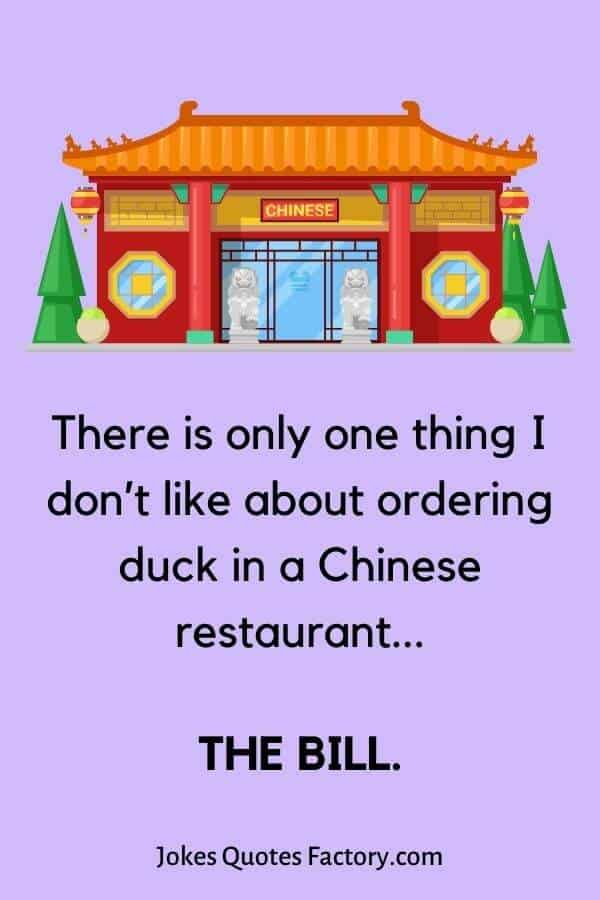 A friend of mine bought an old plane, took the wings off, and turned it into a restaurant.
I don’t think it will take off.

Last night my friend trashed a Chinese restaurant...
Told him I was horrified by his wonton destruction

Did you hear about the new Italian restaurant that just opened in the afterlife?
It’s called Pasta Way.

Ever hear about the million-dollar plan to convert the top floor of The Shard into a restaurant?
Man, the steaks were high on that one.

What do you call a tasty Mexican demon dog served in a restaurant?
A chalupacabra.

Most people’s go-to comfort foods are junk food but remember that these foods will make you unhealthy in the long run. So, don’t stress out too much, relax and enjoy our junk food jokes to avoid stress eating!

How did Reese eat her ice cream?
Witherspoon. 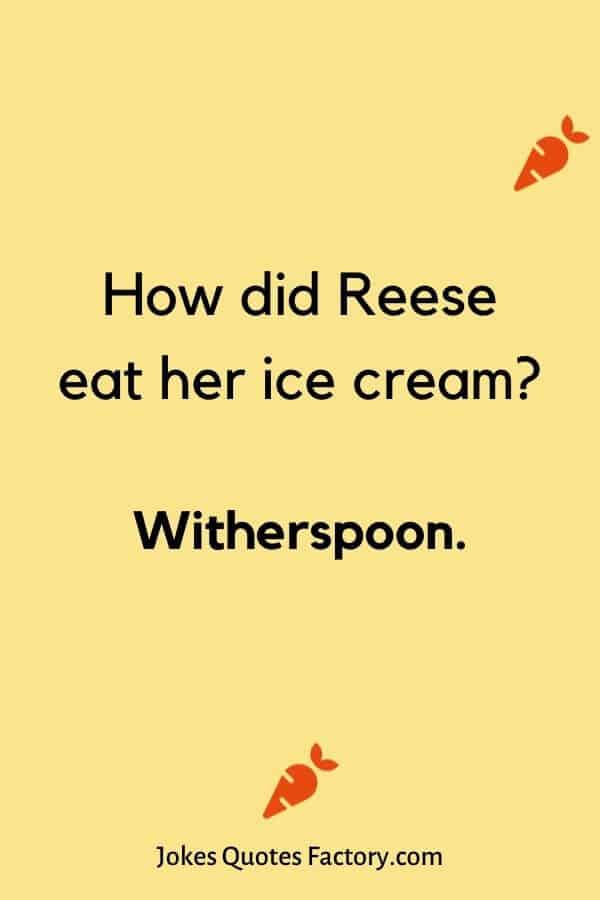 What’s the difference between a pizza and my joke about pizza?
My pizza jokes can’t be topped!

How do you know your close to a Frito Lay factory?
Because of the chips and dip in the road.

What are the 4 major food groups?
Pizza, Coffee, Chocolate and Sex.

Laugh more with these Funny, Corny, Juicy & Dirty Jokes for Adults (Not for Kids)

Why do you always bring a bag of chips to a party?
In queso emergency.

What does it do before it rains candy?
It sprinkles!

When should you take a cookie to the doctor?
When it feels crummy.

What’s the best part of Valentines Day?
The day after when all the chocolate goes on sale. 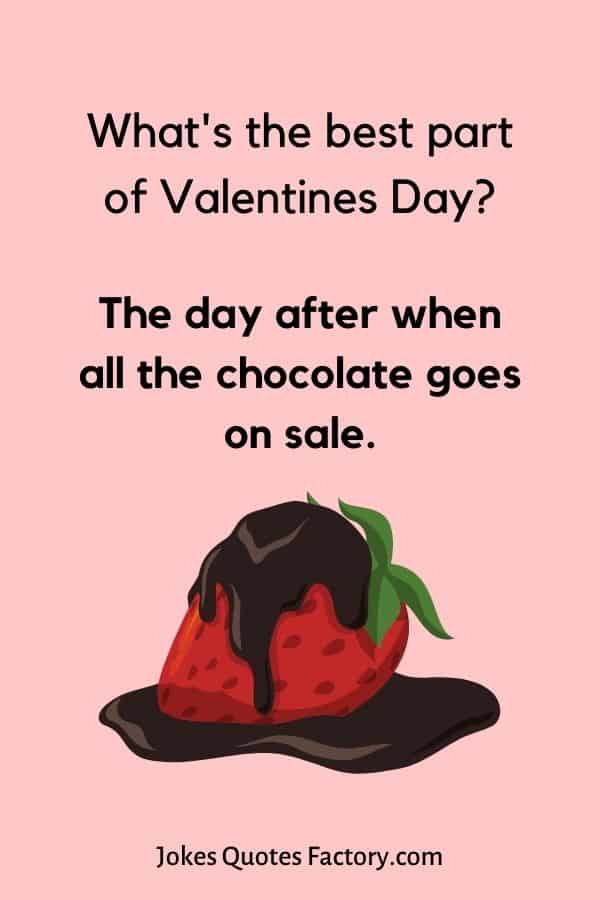 Be the life on your next dinner party with these hilarious jokes. You won’t stop laughing with our deliciously funny jokes about cooking and kitchen jokes.

I saw a yogurt floating across my kitchen.
I think it might be paranormal activia.

Opened the kitchen cupboard and found some fake noodles.
It’s an impasta.

Got Lord of the Rings themed kitchen.
And I particularly like the hob bit.

I just got kicked out of a secret cooking society.
I spilled the beans.

I really like cooking fruit with sugar.
I know many people disagree with me. But that’s my jam!

Summary: Eggcellent Food Jokes and Puns That are Totally Hilarious

Glad that you stayed until the end of our compilation. These funny jokes about foods can definitely bring a smile to everyone. We hope you found your favourite joke on food!

Hungry for more? Here are more jokes just for you: