Are you also a fan of these cute and funny minions? These little creatures are so hilarious in all ways possible. They never cease to surprise us and make us giggle. So, to share some good vibes and remember the funniest minions moments, we have compiled the best minion jokes for kids you could ever find!

Have a good look at these jokes about minions and be the star in the room.

Amuse your little ones with minion humor! Everyone is fond of minions and these hilarious minion jokes will put a smile on your face! Go crazy and be like laughing minions with this collection that we have sourced for you!

What do minions exceed at school?
Gru-p projects. 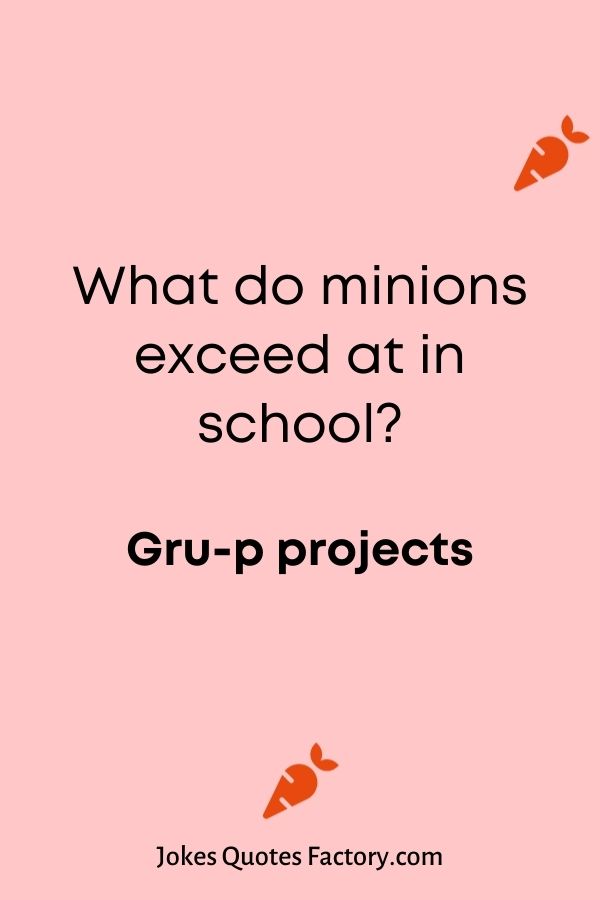 Why did the minion call an ambulance?
His banana wasn’t peeling well.

Why did the minion quit his job?
The hours were too Gru-eling.

How much does it cost to rent minions?
A minion dollars.

When was the first Despicable Me movie released in theaters?
I’m not sure, but it feels like a minion years ago.

What do you get when you cross Gru with a pug?
A group hug.

What do you call a minion’s Nintendo Wii character?
A Despicable Mii. 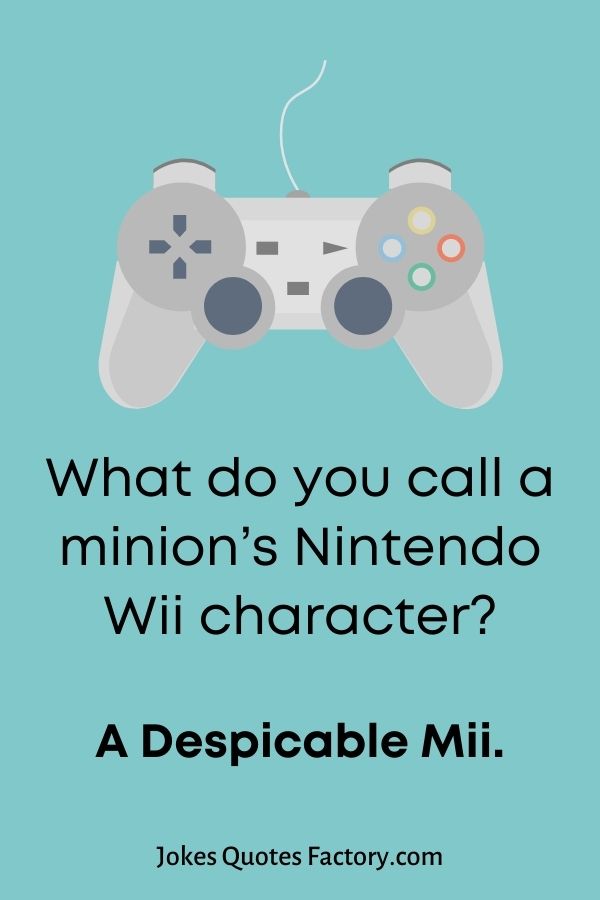 What is worse than minion eating bananas?
A minion going bananas.

What can you call a small onion?
A Mini-on!

What type of schools do minions like best?
Banana sundae schools.

What’s another word for a minion?
A Gru-pie.

What did the Russian government do when they needed to replace their spies?
They Gru new ones. 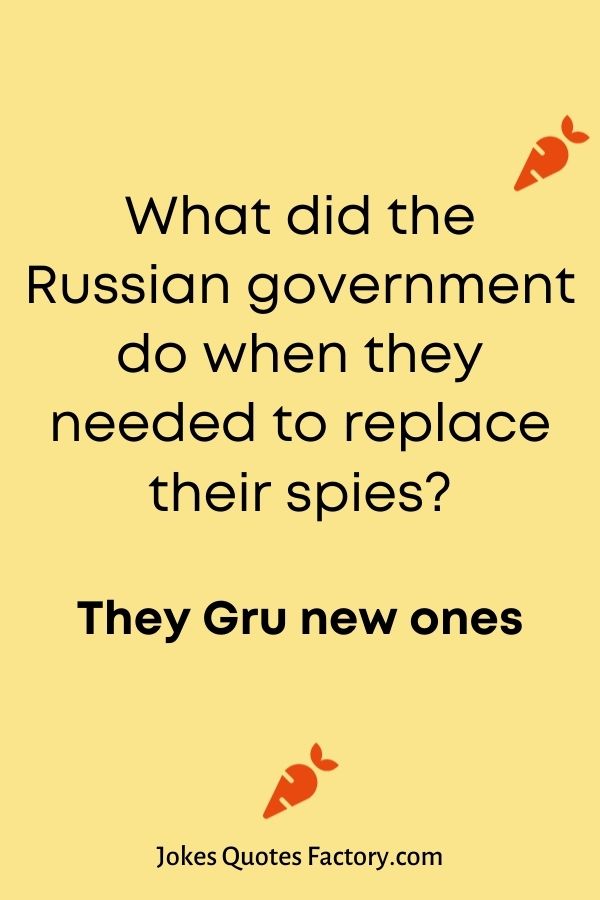 What meal would a minion never order in a restaurant?
Liver and minions.

Did you not like Despicable Me at first?
Maybe it Gru on you with time.

Why couldn’t the minion yell high?
Because he could only yell low.

Where does Gru take Kyle to get his fur trimmed?
The Gru-mers. 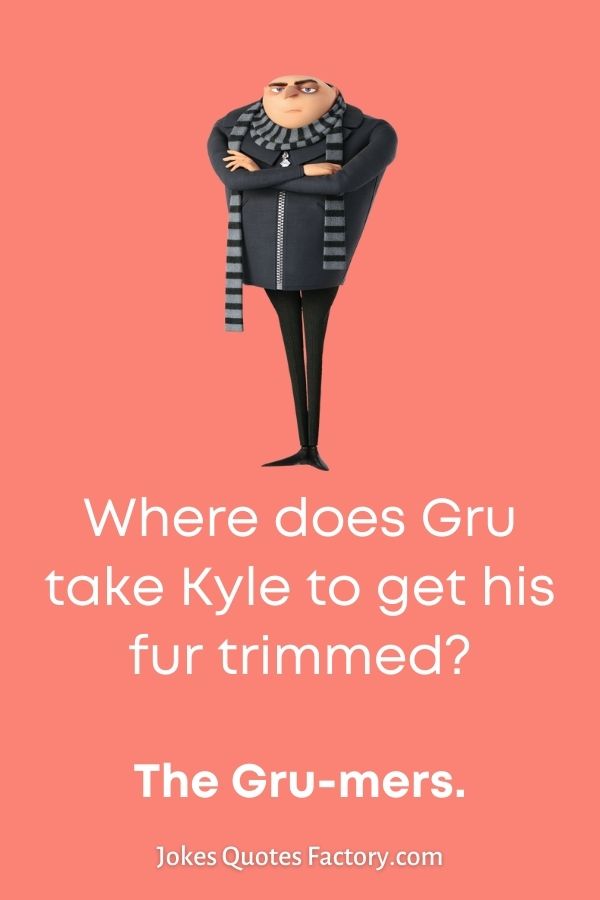 What did the minions give Gru two banana skins for his birthday?
Because he wanted a pair of slippers.

Where do minions love to shop?
Banana Republic.

Why was the minion so scared at the movie theater?
The movie he saw was too Gru-some.

What type of bread do minions prefer?
Gru-ten free.

What did the banana say to the minion?
Nothing — bananas can’t talk!

What would you call a minion with black stripes all over its body?
A despicable bee. 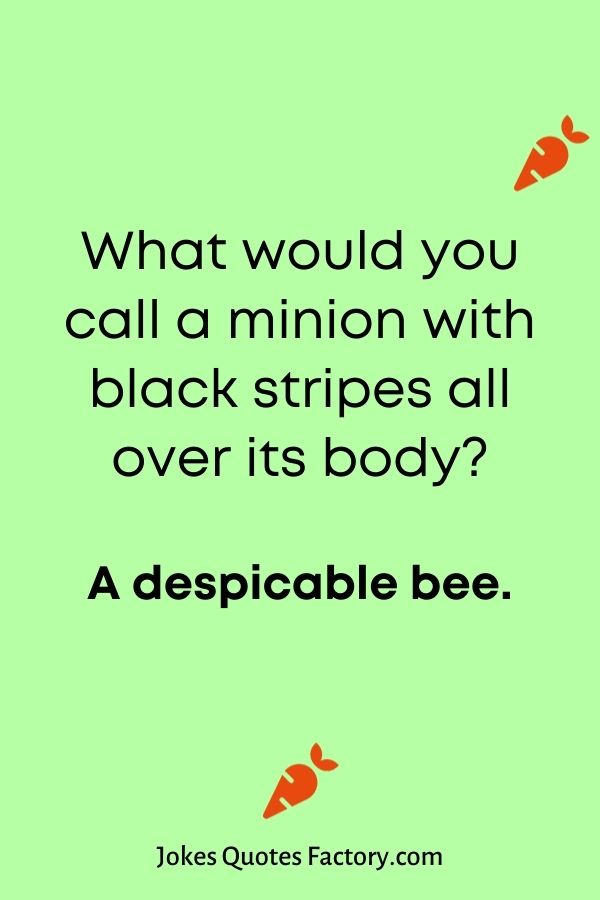 What do you call someone who has a lot of minions?
A minion-aire.

Why do minions wear two pairs of pants to the golf course?
In case they get a hole in one.

What do minions call their Grandmothers?
Ba-Nanas.

Have some fun and be cheered up. These little yellow creatures are undeniably cute, especially when they talk gibberish, and once you see them, your smile will never go away. So, have a look at some more minion jokes on friends.

I know I would shit on.

What search engine is the most popular with the minions?
Gru-gle.

How do minions save money?
They use Gru-Pon. 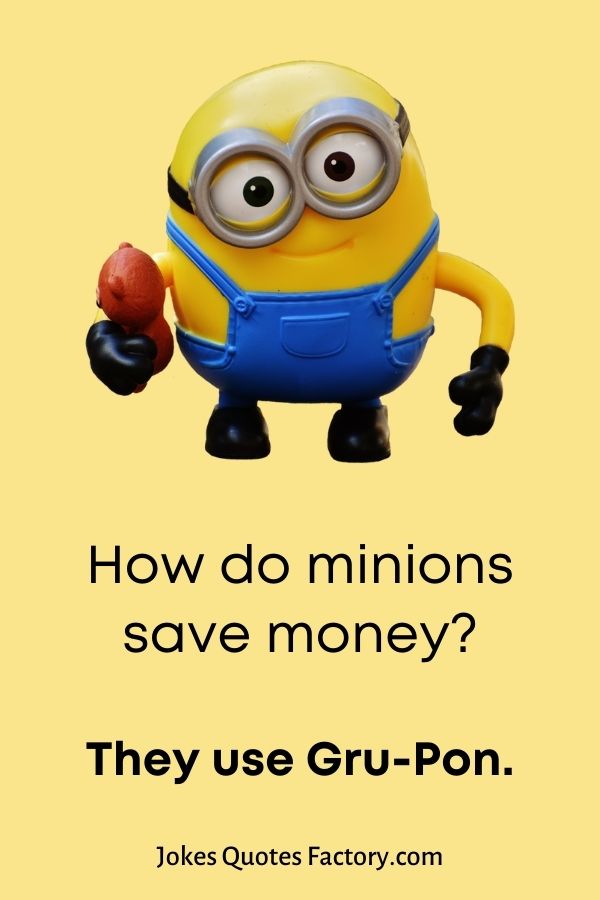 What did the police officer say when they met up with Bob, Stuart, and Kevin?
Yellow, yellow, yellow.

What do you call a minion that trips and falls on the grill?
Filet minion.

What do minions say when they pick up the telephone?
“Yellow.”

If a friendship lasts longer than 7 years.
Then you are no longer just friends. You are family.

I don’t have a big group of friends,
but I do have 3 or 4 people who probably don’t want me to die.

How about some minion dad jokes? Are you ready for this? Dad jokes are already funny as it is so imagine how much funnier it is when you insert some minion vibe to it? You will go nuts! Laugh hard with our collection of dad jokes about minions.

What did a Mom minion say to her child on their birthday?
“You’re one in a minion.” 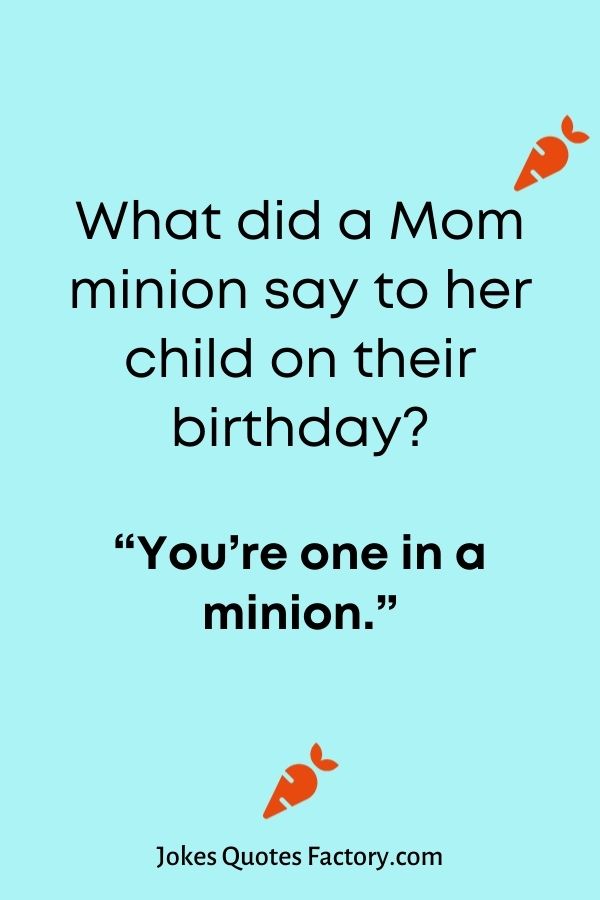 What classic novel do minions like to read?
Little Minions.

Why do minions take their bananas to hairdressers?
Because they get split ends.

Why do minions like bananas so much?
They find them a-peeling.

What’s the quickest way for minions to get from the second floor to the first?
Sliding down the banana-ster, of course!

What did minions hear aboard the Titanic?
“Minion and children first!” 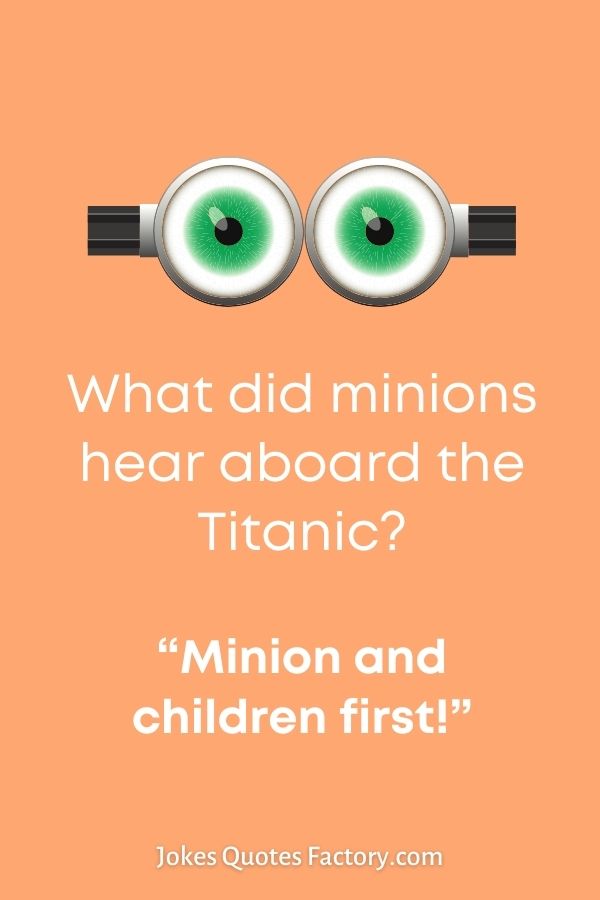 What did the doctor say to the minion?
“You’ve got yellow fever.”

Want to know some lovely names for minions? These minion names are worth a look!

We can’t take our eyes off these banana-loving things. Minion quotes will fascinate and amuse you. Laugh with these silly quotes that we have prepared just for you.

Doesn’t it feel so good to be bad?
Scarlet Overkill 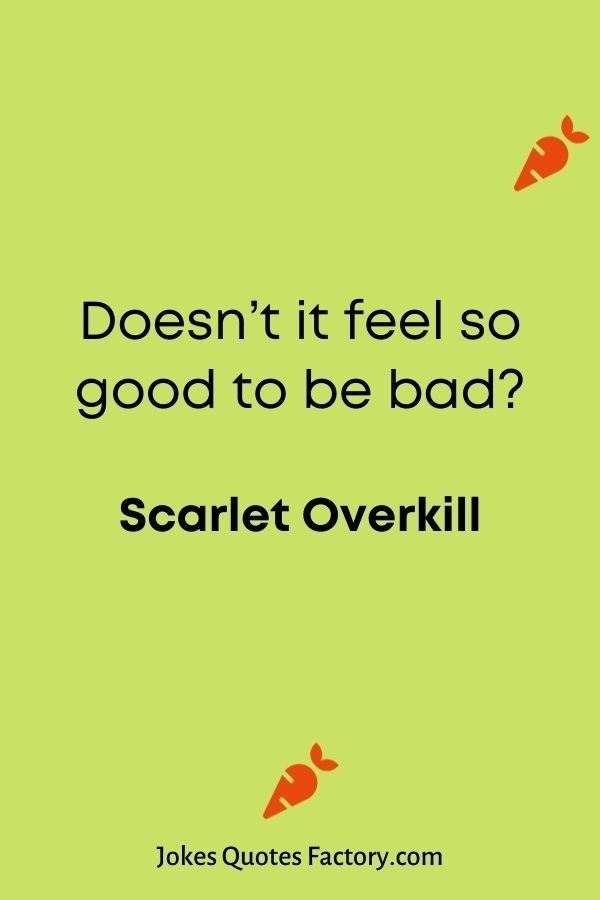 So … you came for the queen’s crown, did ya? Well, you’re gonna have to get through me! The keeper of her crown!
Keeper of the Crown

Villains, this is no longer a coronation! It is an execution! Get them!
Scarlet Overkill 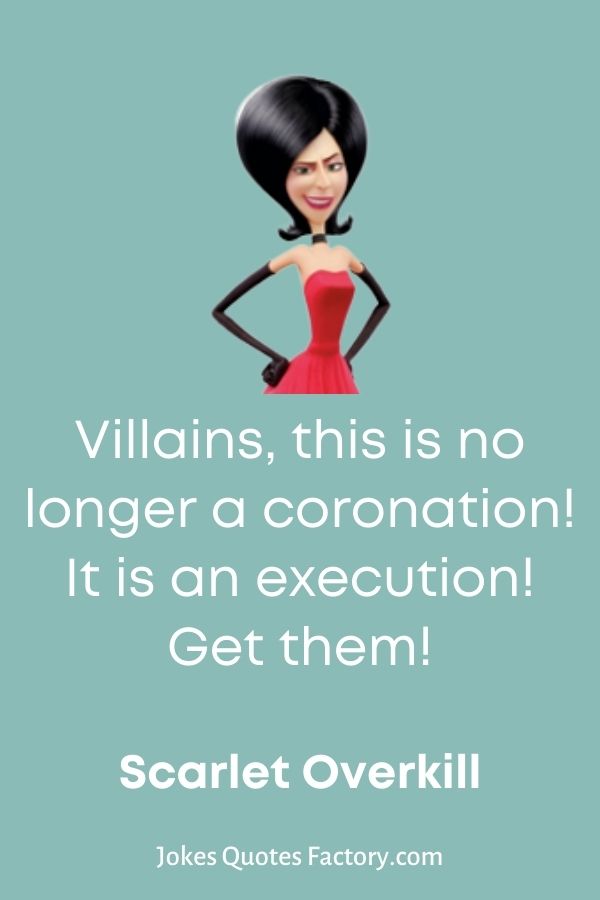 We were born with flippers! … No? Just me? Okay.
Frankie Fishlips

So that’s your plan? Make yourself a bigger target?
Scarlet Overkill

Herb, seriously, I want to dig up that William Shakespeare so he can see what true writing is. I love it!
Scarlet Overkill

This is torture! Guys, cut it out! This is really unprofessional!
Herb Overkill 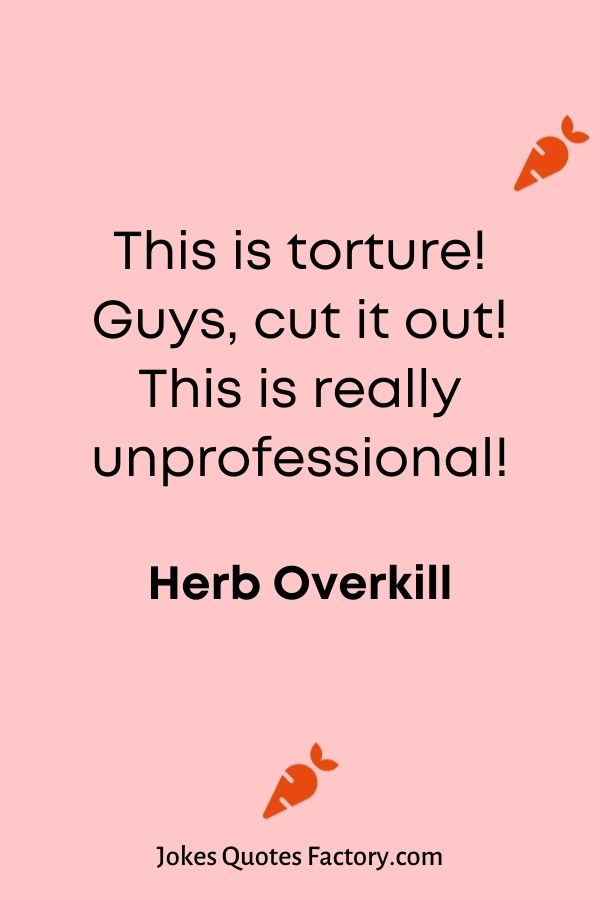 Work for me, and all this will be yours: respect, power…
Scarlet Overkill

I’m going to get all my favorite villains to sign my magazine! Scarlet Overkill! If I was a minion, that’s who I would want to work for.
Tina

Steal me the crown, and all your dreams come true. Respect power!
Scarlet Overkill

You think it’s funny to mock the elderly, do ya?
Keeper of the Crown

This is Queen Elizabeth, ruler of England. I love England. Their music, the fashion. I’m seriously thinking about overthrowing it someday. Anyway. This pale drink of water oversees it all. I’m her biggest fan, loved her work. And I really, really, really want her crown!
Scarlet Overkill

By the time she was 13, she built a criminal empire!
Tina 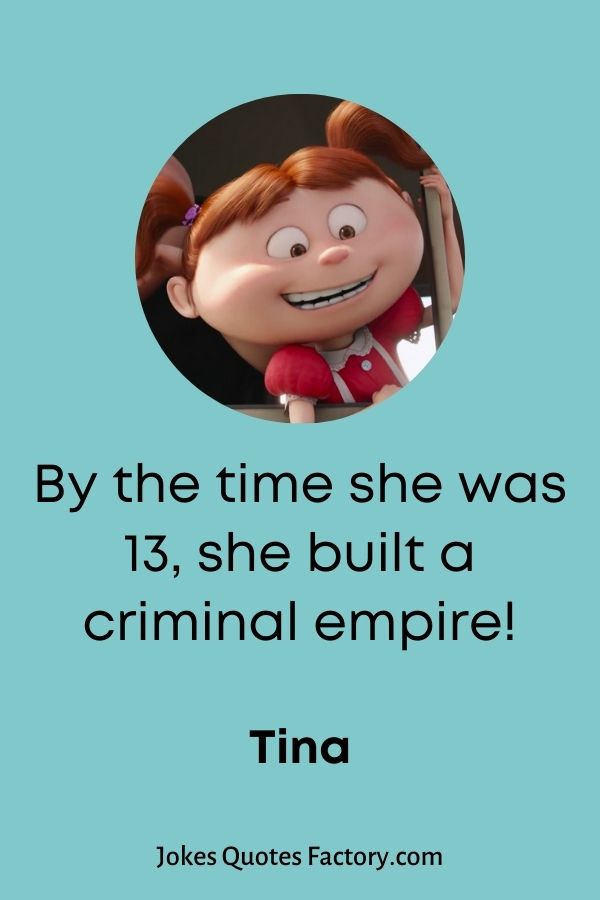 Need some funny minions memes to get you through the day? Explore our interesting collection of minion memes and share it with friends and families.  Find the cutest minion funnies memes here.

You’re bored, not hungry. So shut up! 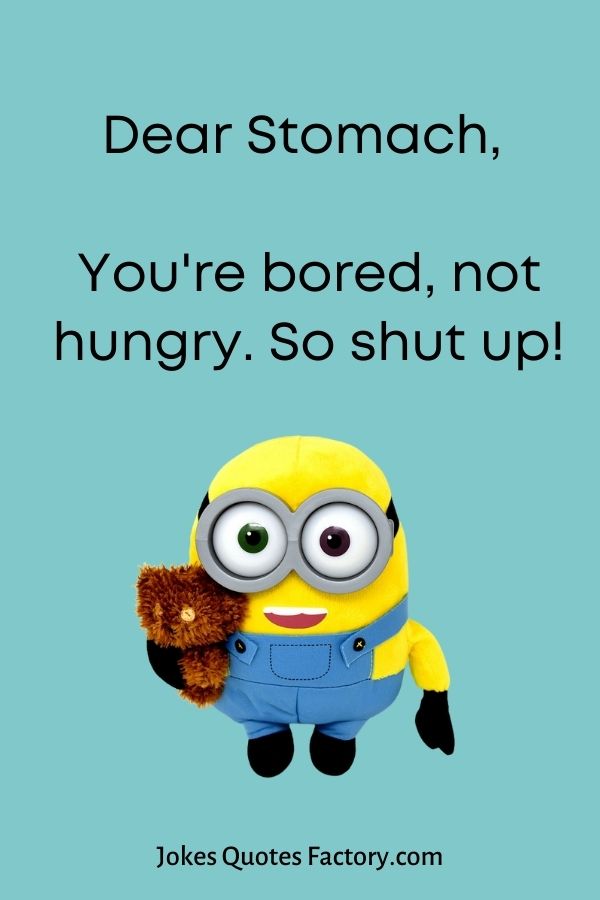 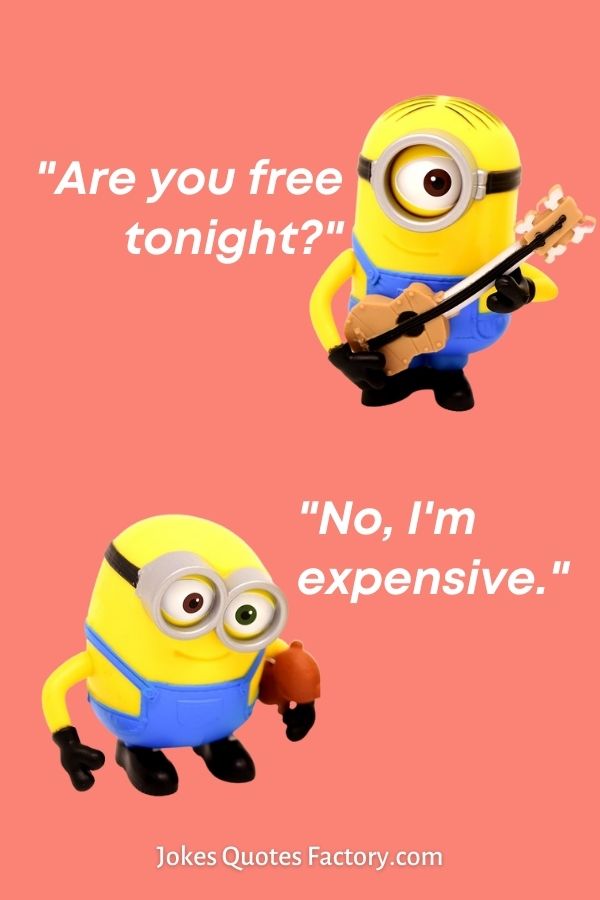 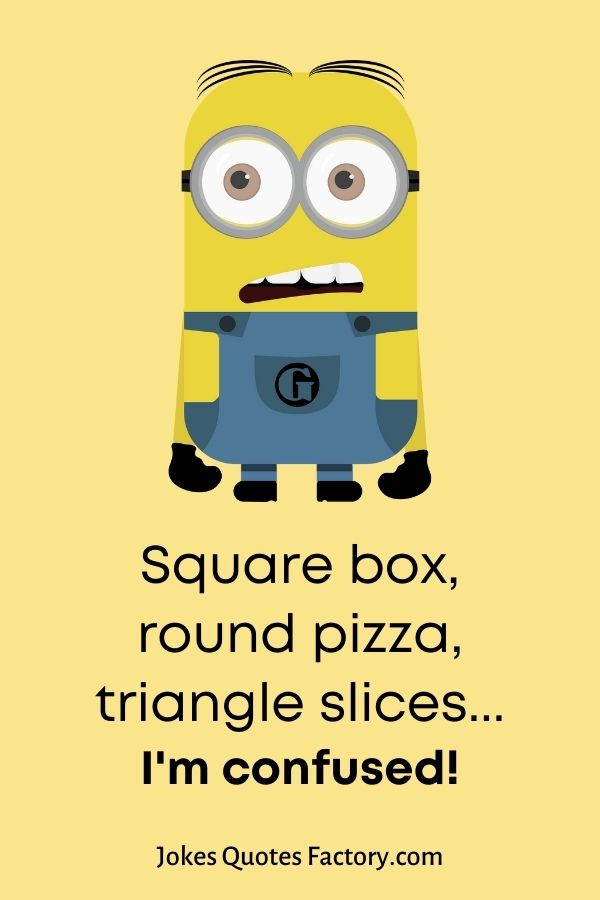 Some people are just like trees.
They take forever to grow up. 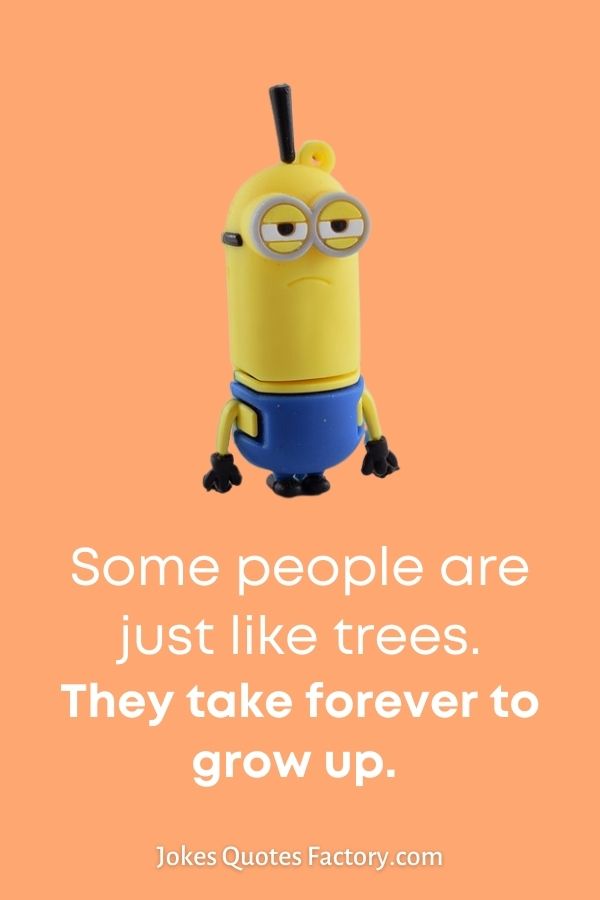 What minion jokes is your favorite? Do you love the funny jokes minions? It looks like you did because you are still here.

You might also want to check out these BEST and FUNNIEST Dad jokes ever.

Have a look at Funny Teenage Jokes One-Liners.

For even more also check out: