Are you a foodie or a techie? Whatever you are, this article is perfect for you. Everyone loves apples, whether it is the phone brand or the fruit. Both can make a massive impact on our health and on our lives. So if you’re interested in Apple, you might want to check out the best apple jokes that can make you and your friends laugh! Don’t forget, a joke a day keeps the doctor away and keeps the stress away!

If you want more, here are some food jokes that are perfect for you!

From iPhone to iPads and various apple gadgets Steve Jobs invented, we can fabricate extraordinary jokes that can make you leap for joy. Try and experience for yourself by reading these original thought-provoking apple jokes. You will surely enjoy it and make you giggle with glee.

What do you call a person who saw an apple store getting robbed?
An iWitness. 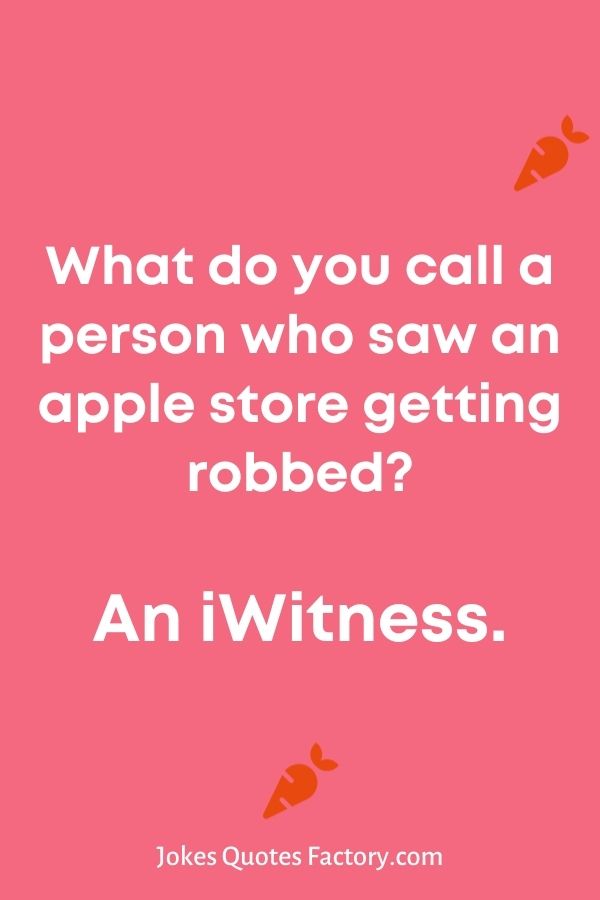 How do you make an apple puff?
Chase it round the garden.

Apple has come up with a new revolutionary eye patch for pirates.
It’s called the iEye patch.

An apple pie in Jamaica cost $2 and in Barbados its $1.90
Those are the pie rates of the Caribbean.

Why should you not fart in an apple store?
Cause they don’t have windows.

What is the difference between an apple and an orphan?
Apple gets picked.

If Apple made a car what would it be missing?
Windows…

Steve Jobs would’ve been a better president than Trump.
But I guess comparing apples to oranges is unfair.

Apple just came out with a new WatchOS update, but I rejected it.
Not on my watch. 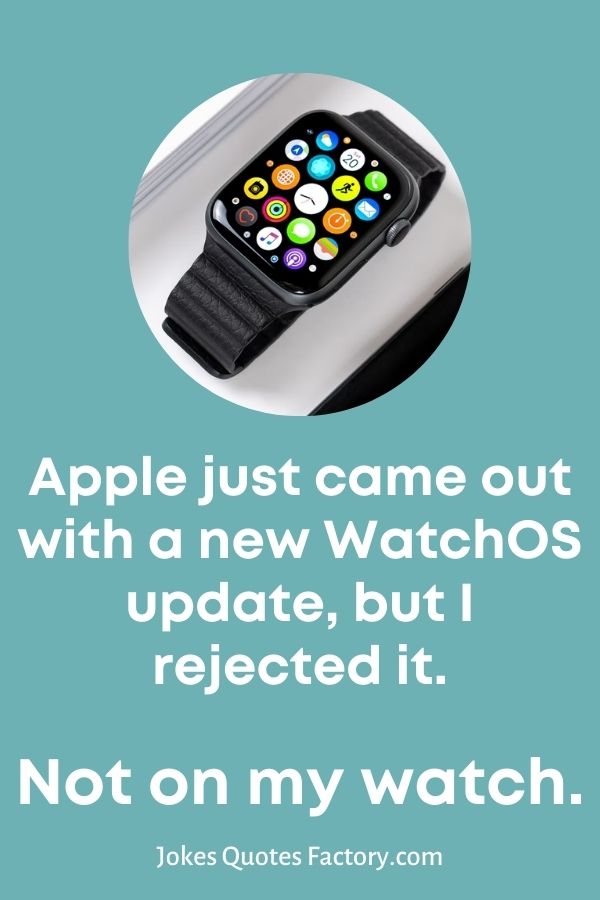 Why do apples avoid being seen with Martha Stewart?
to avoid suspicion of in-cider trading.

They’re teaching apple juicing down the road from me, but it got cancelled before I could go.
It was a pressing issue.

Apple’s cars will not be that popular…
Because they don’t support windows.

Why did Jon Snow go to the Apple store?
For the watch.

My neighbor says he is too afraid to plant an apple tree.
I told him, “Grow a pear”!

I think Apple is run by trendy pirates.
They’re always updating to a new iPatch.

Did you know that Apple makes your eyes feel better?
They call it iDrops. 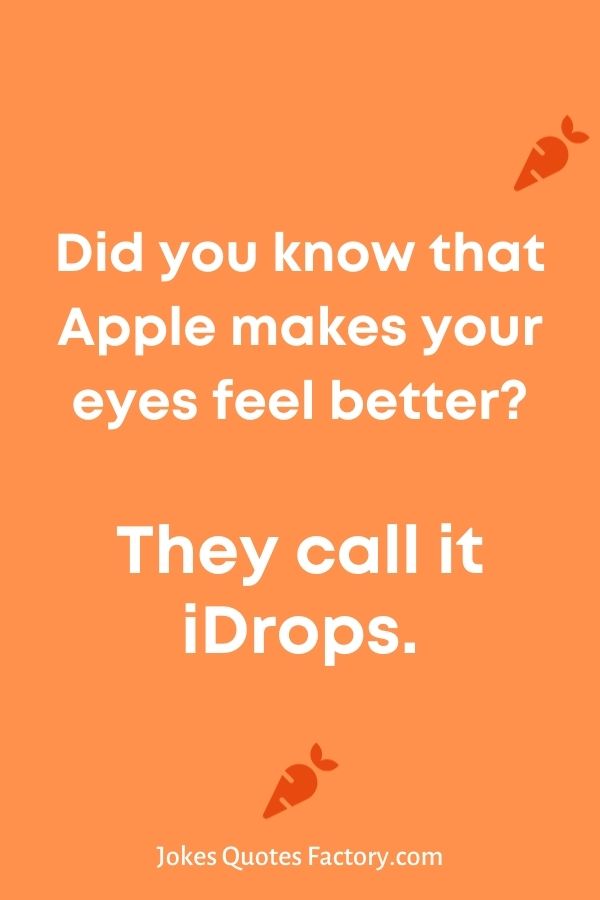 What do you call an end to all fruits?
An apple-colypse.

Apple is set to release its new electric smart car in 2024…
It will be the first apple product with windows.

Did you hear about the music app that is preloaded on every iPhone 6 plus?
GarageBend

What happens if you download the Princess Diana screensaver application?
Your iPhone will keep crashing!

What type of computer does a horse like to eat?
A Macintosh.

According to Apple what is the leading cause of iPhones overheating?
Downloading images of Kim Kardashian!

Why is Apple still reporting record profits?
Because iPhone users are just as oblivious to the looming recession as they are to the people around them!

What do you call an iPhone that isn’t kidding around?
Dead Siri-ous.

What do you call a bent iPhone 6 plus?
A dead wringer. 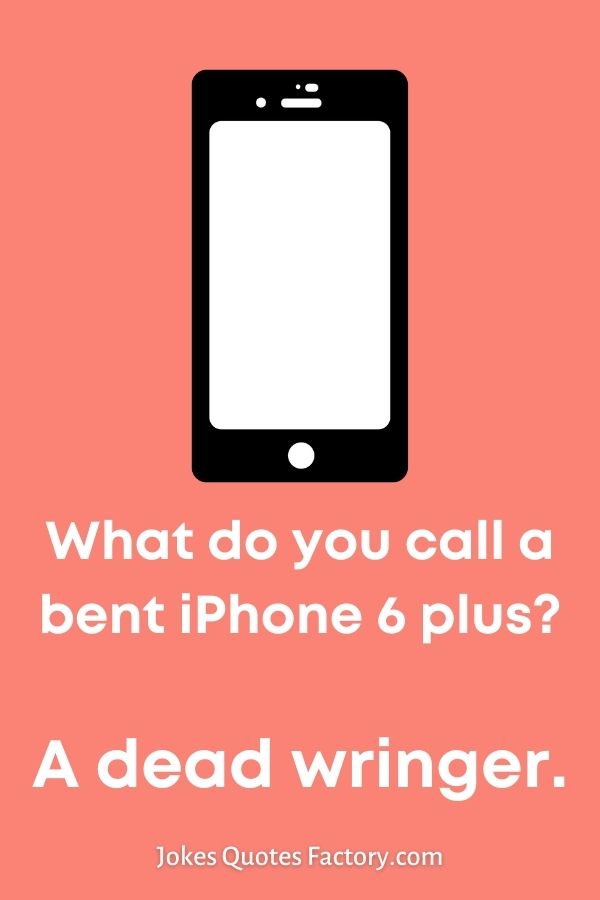 How can you tell which one of your friends has the new iPhone 6s plus?
Don’t worry, they’ll let you know.

Why is it so sad that Steve Jobs died?
Everyone at Apple is crying their i’s out.

What do you call a Scottish iPhone?
An AyePhone.

How many Apple iPhone early adopters does it take to change a light bulb?
3001. 1 to do the work and 3000 to go online and bitch about the lack of obscure features!

What do you get when you cross an iPhone 6 plus and skinny jeans?
A LG Flex

What do you get if you cross an iPhone and a fridge?
Cool music.

What’s the worst part about having bad gas in an Apple Store?
You can’t open windows.

Me: Alexa check my bank balance and tell me which apple product can I buy?
Alexa: Apple juice.

If an apple a day keeps the doctor away, what does an onion a day do?
Keeps everyone away. 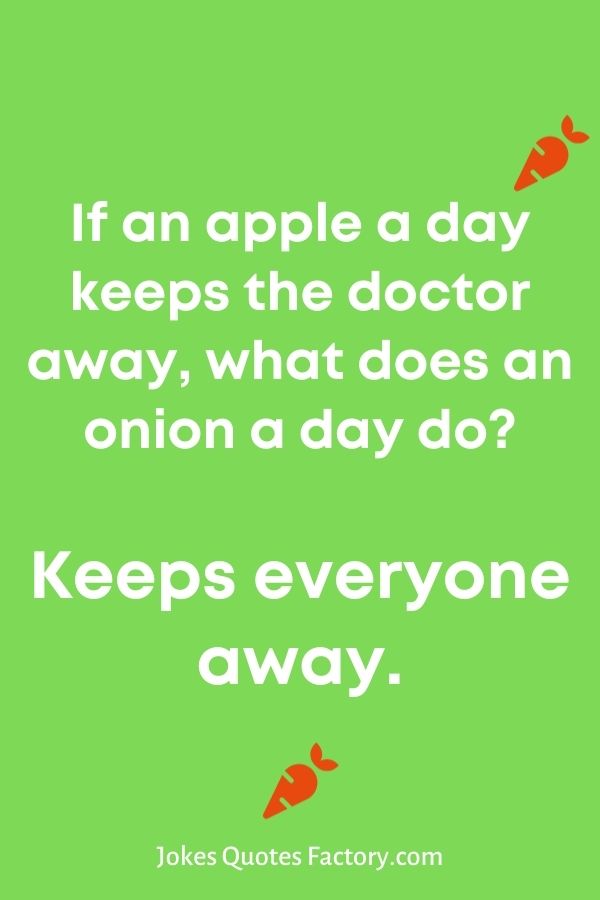 One day, the girl asks the engineer why he gives her apples when the doctor is giving her roses.

“Because,” says the engineer, “an apple a day keeps the doctor away.”

We often hear the phrase, an apple a day keeps the doctor away and this is true because of all the good things this fruit can do to our body.  Go ahead and eat your apple while reading through our classic knock-knock apple jokes for kids.

Knock, knock.
Who’s there?
Apple.
Apple who?
Apple your hair if you don’t let me in.

Knock, knock.
Who’s there?
An apple.
An apple who?
An apple a day keeps the doctor away.

Knock. Knock.
Who’s there?
Apple.
Apple who?
Apple on the door but it won’t open. 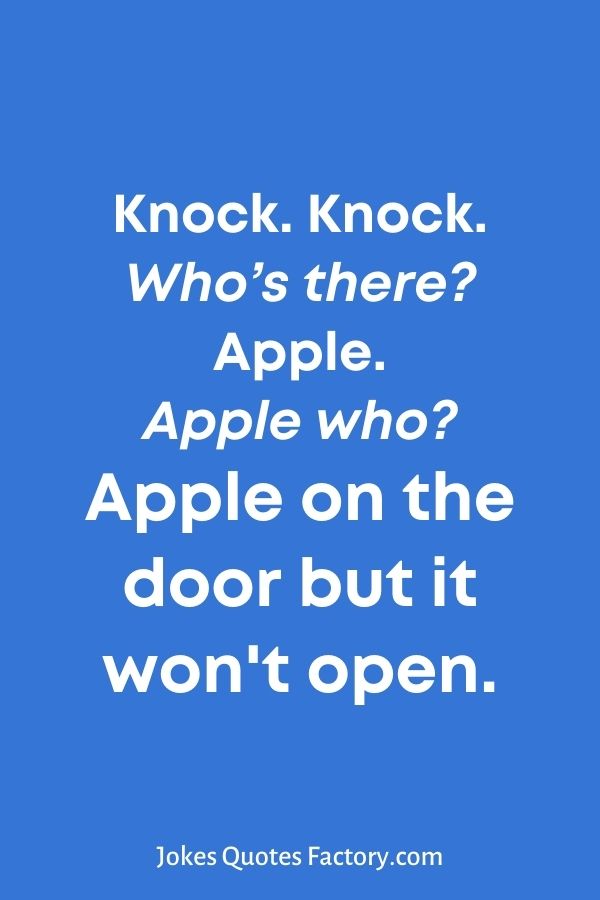 More apple humor? We are giving you amusing apple fruit jokes that will linger on in different seasons of your lives. Come and spoil yourself with these unforgettable jokes. Let’s have fun together as we read this collection of apple fruit jokes.

Why didn’t the two worms go into Noah’s ark in an apple?
Because everyone had to go in pairs!

What did the worm want to do when he grew up?
He wanted to join the Apple Core (Corps).

Where do bugs go to watch the big game?
Apple-Bees.

What do you call an apple that’s been around the world?
Johnny Appleseed.

What did the apple say to the almond?
You’re Nuts! 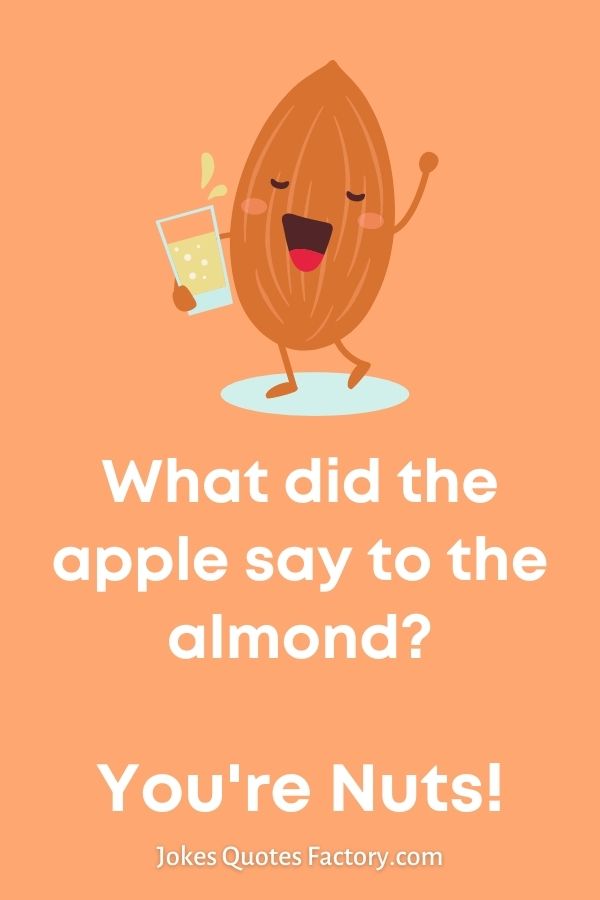 Why are apples afraid to grow in the United States?
Because they don’t want to be as American as apple pie.

What did one maggot say to the other who was stuck in an apple?
Worm your way out of that one, then!

What do you say when a fruit wins the talent show?
How about them apples?

How do you get the most apples at Halloween?
Take a snorkel.

What do you give a horse that has just won the Kentucky Derby?
An Appletini.

Dad, do you like baked apples? Yes son, why?
The orchard’s on fire.

What do u get from a perverted apple?
Hard Cider.

What lives in apples and is an avid reader?
A bookworm! 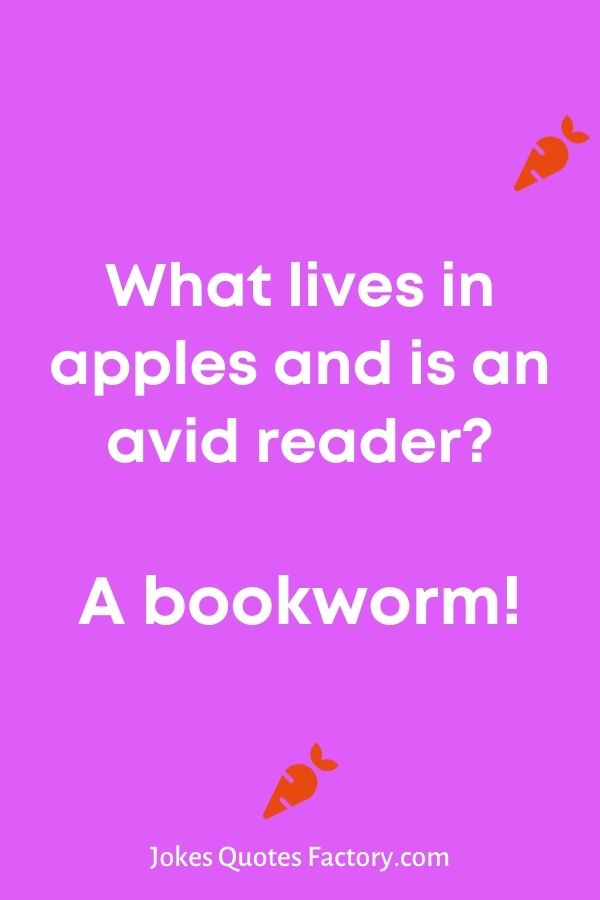 What do you call a fruit that is rough around the edges?
A bad apple.

What do you get when you cross an apple with a Christmas tree?
Pineapple.

What is the left side of an apple?
The part that you don’t eat.

What do you get if you cross a jogger with an apple pie?
Puff pastry!

What can a whole apple do that half an apple can’t do?
It can look round.

Why did Eve want to leave the garden of Eden and move to New York?
She fell for the Big Apple!

How do you make an apple turnover?
Push it down hill.

What kind of apple has a short temper?
A crab apple. 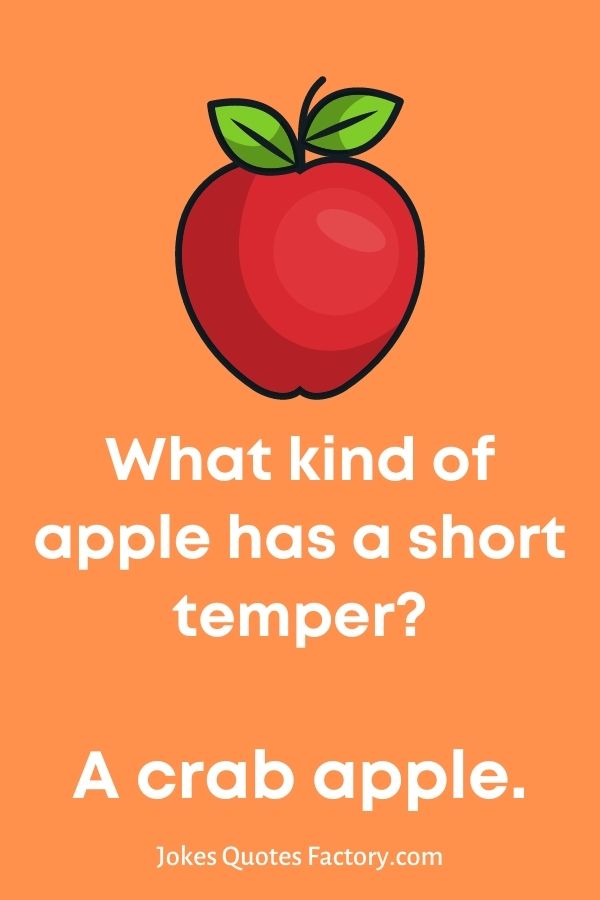 Why did the farmer hang raincoats all over his orchard?
Someone told him he should get an apple Mac.

Why is it so difficult to work at an apple pie factory?
They have such a high turnover rate!

What do you get when you put an iPhone in a blender?
Apple juice!

What do you get when you cross apple pie with a Christmas tree?
Pineapple pie!

Why did the apple pie cross the road?
It saw a fork up ahead!

Why did the apple pie go to the dentist!
Because it needed a filling!

What’s worse than finding a worm in your apple?
Finding half a worm!

How do you make an apple turnover?
You push it down the hill!

What do you call an apple that plays the trumpet?
A tooty fruity!

Why did the worm leave the apple?
Because Noah said to travel in pairs! 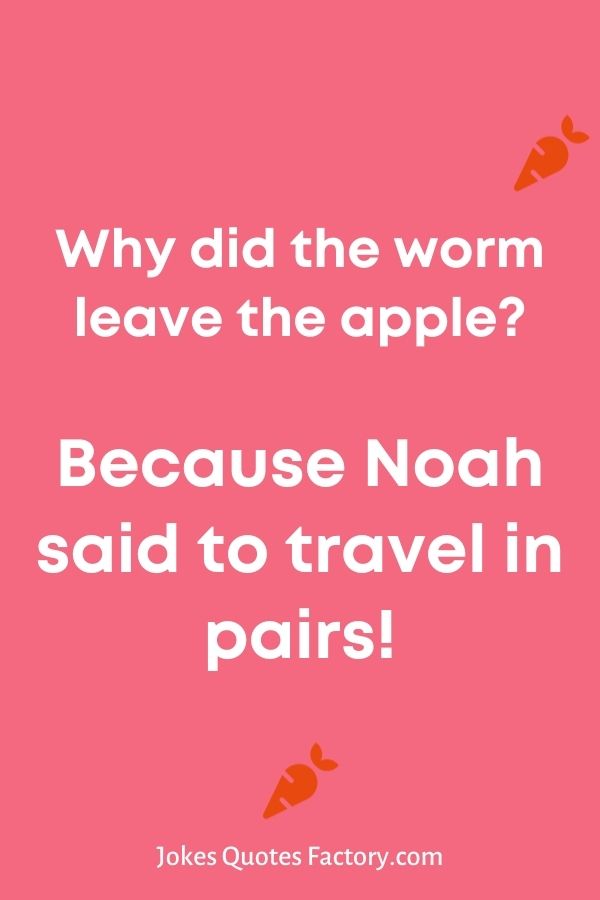 Are you having a dull day, or are you stressed from work? Then you might want to relax and have a look at these funny jokes about apples that can prevent you from having a stressful day.

In a TV series about apples, one apple appeared for a brief moment because it was a Cameo apple.

Few apples have earned the respect of climbing a mountain.
The Fuji Apple is the only one who has such a volcanic achievement.

When the young Apple saw the apple called Lady Alice, he was Smitten.

The husband and wife apple remembered the time back in the day when they were performed as Gala stars.

My neighbor apple loves to roam around at odd places and odd hours.
They called themselves Liberty.

If you cross an apple with meat, you are most likely going to get a Beacon. 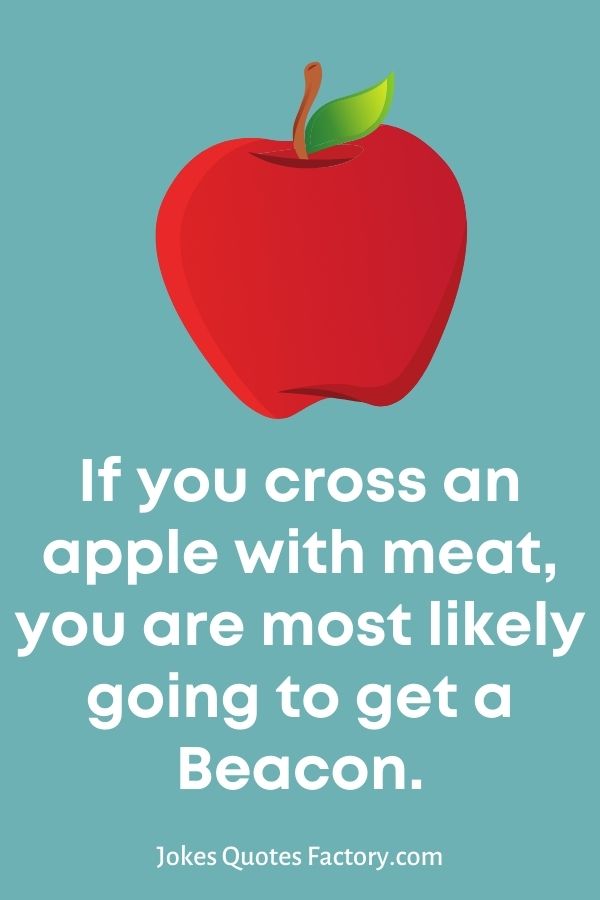 Following is our collection of apple jokes for adults that will make you laugh aloud! Take your time to find the proper joke for you, and feel free to use these jokes to impress your friends.

If I take a horizontal picture of you with my iPhone & then turn my phone vertical, you look hot.

I haven’t had my Apple for today yet girl, why don’t you help me get the doctor away…

If you were a fruit, you would be a fine-apple.
But you and me? We could be a pear.

Check out the new operating system…
IN MY PANTS!

You’re the Apple of my iMac.

Girl, you look so good in that dress—makes you look retina display sharp and vibrant.

I gotta question…
Apple Music or Spotify
Did you see the glitch earlier?
You weren’t listed as the top hottest single.

You only need to use two fingers on my trackpad! 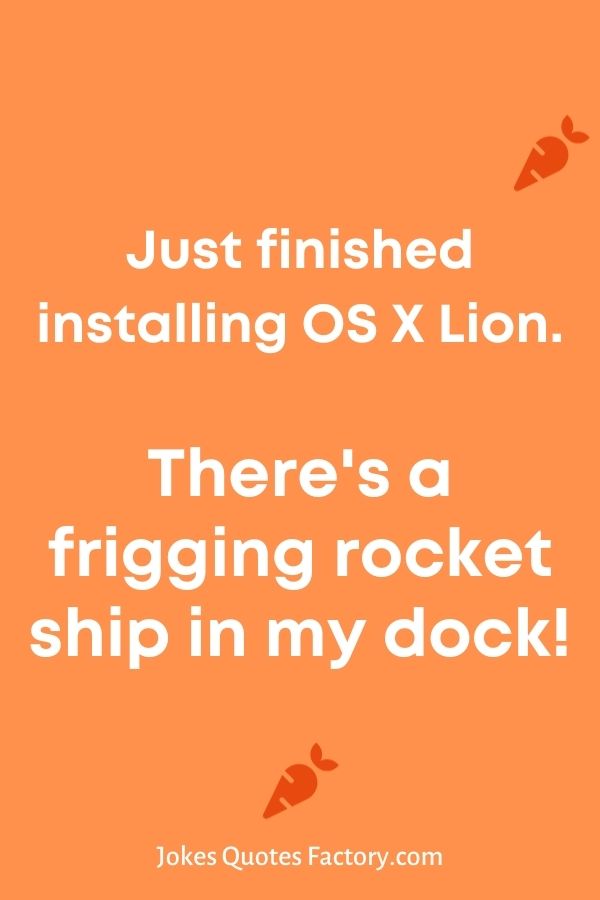 There you have it; the hilarious apple jokes that you’ve ever heard of. It is fascinating that there are many jokes about apples. From gadgets to fruits, they are all full of humor and laughter. We hope you liked our list of jokes, and if you enjoyed it make sure to crack these hilarious jokes around to make your atmosphere positive and happy!

Hungry for more? Here are more jokes just for you: