Marriage is not a joke, but it can feel like one…okay, let me rephrase that: There is plenty of funny marriage jokes that include the husband and wife on both ends. I did some research and collected the funniest and most hilarious jokes about marriage. Do not take them too serious 😉

Marriage can be the best thing that will happen to anyone. Well, it could also be the funniest. It’s not surprising that people just come up with marriage jokes for breakfast because that’s what marriage is. It’s all about the highs and lows, the sad and the happy! There should be laughter in marriage for it to survive. Crack and share these marriage puns and jokes to your married friends – or apply them to your own partnership.

Check out Best Travel Jokes and Puns. For families with children, I wrote up all my Funny Teenage Jokes One-Liners.

Even better: We have summed up the Best Boss Jokes and Puns

Good to know: Other than in real-life, the roles in these jokes are easy to swap and work on both directions.

A joke does not have to be complicated; neither does a marriage. Therefore, we want to start with the simple and quick jokes. Easy to remember, yet burning 😉 Sometimes, that one-liner marriage joke is enough to make the world go round and everyone on the floors laughing like crazy! Take note, these also include comedian jokes about marriage.

My wife and I were happy for twenty years. Then we met.

Before I tell my wife something important, I take both her hands in mine. That way she can’t hit me with them.

After a quarrel, a wife said to her husband,

“You know, I was a fool when I married you.”

The husband replied, “Yes, dear, but I was in love and didn’t notice.”

Alcohol is a perfect solvent: It dissolves marriages, families, and careers. 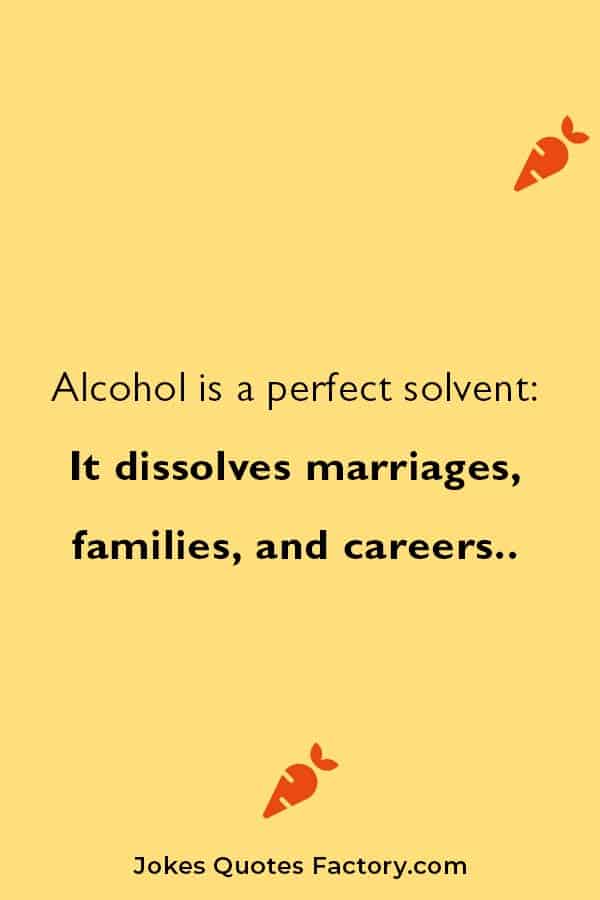 At the cocktail party, one woman said to another: “Aren’t you wearing your wedding ring on the wrong finger?”

The other replied, “Yes, I am, I married the wrong man.”

A doctor tells a woman she can no longer touch anything alcoholic. So she gets a divorce.

Child’s experience: if a mother is laughing at the father’s jokes, it means they have guests. 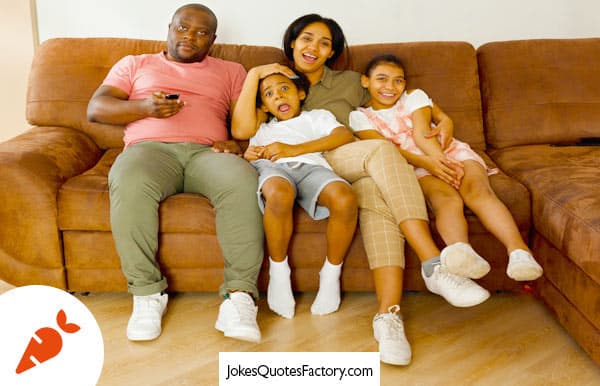 Marriage is like going to a restaurant. You order what you want, then when you see what the other person has, you wish you had ordered that.

Wealth is any income that is at least one hundred dollars a year more than the income of one’s wife’s sister’s husband.

A man yells to his wife: “Pack your bags, honey, I just won the lottery.”

Wife: “Oh wonderful! Should I pack for the beach or the mountains?”.

Wife: “I look fat. Can you give me a compliment?”
Husband: “You have perfect eyesight.” 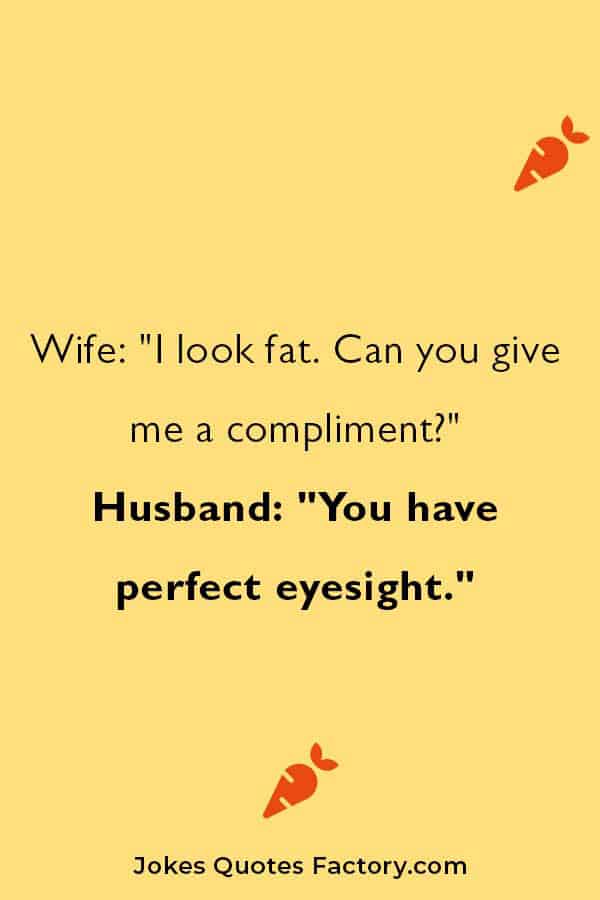 Husbands are awkward things to deal with; even keeping them in hot water will not make them tender.

Just listen up while I tell you about this couple, and I’ll make it seem like the shortest 45 minutes of your life.

A man said his credit card was stolen.

But he decided not to report it because the thief was spending less than his wife did. 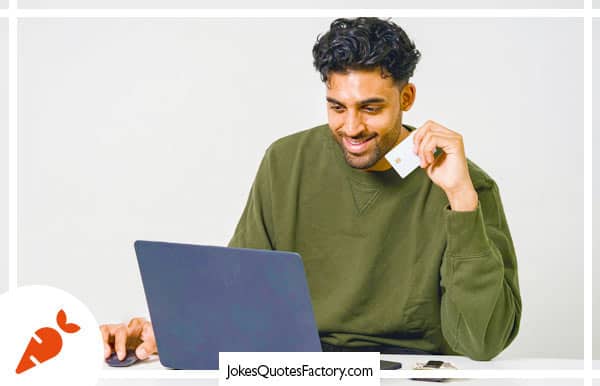 A husband is a guy who tells you when you’ve got on too much lipstick and helps you with your girdle when your hips stick.

Have you been to a wedding recently? Regardless, it’s the perfect time to drop that funny jokes for newly married couple in the bag!

Take one or two marriage jokes in the list and drop them on the table and have everyone laughing. You can even insert in your wedding toast, that’s if you’re given the chance to do the toast. Or you can just go table by table dropping marriage jokes like that funny man in the reception!

Why does a man twist his wedding ring on his finger?

He’s trying to figure out the combination.

Did you hear about the two spiders who just got engaged?

I hear they met on the web.

Women marry because they believe that he will change one day.

Marriages are made in heaven. Then again, so are thunder, lightning, tornadoes, and hail. 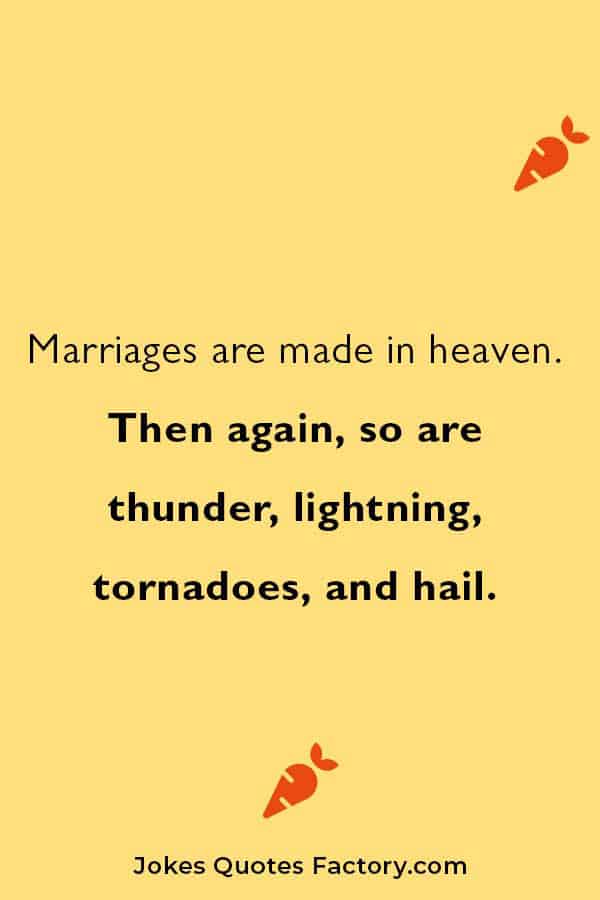 Ronnie Corbett: Do think marriage is a lottery?

Ronnie Barker: No. With a lottery, you do have a slight chance.

At the cocktail party, one woman said to another: “Aren’t you wearing your wedding ring on the wrong finger?”

The other replied, “Yes, I am, I married the wrong man.”

My husband is a car nut. That’s why I could appreciate the card he gave me on our fifth wedding anniversary.

Is marriage just two people taking turns mashing the trash down in the hopes the other one folds first and empties the bin?

I just saw two nuclear technicians getting married. The bride was radiant and the groom was glowing.

Do you know why the King of Hearts married the Queen of Hearts?

They were perfectly suited to each other.

I love being married. It’s so great to find that one special person you want to annoy for the rest of your life. 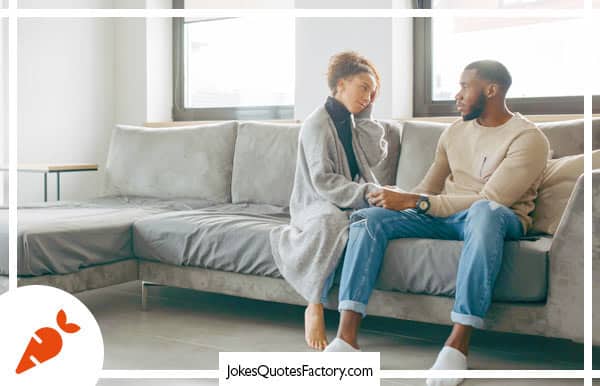 Still looking for jokes for marriage? We all know it, we don’t get to finish a marriage jokes list without a husband jokes somewhere in between. These men are just almost the foundation of many marriage jokes.

What’s the difference between a new husband and a new dog?

1) After a year, the dog is still excited to see you.

2) A dog only takes a couple of months to train.

I asked my wife: “Where do you want to go for our anniversary?”

It warmed my heart to see her face melt in sweet appreciation. “Somewhere I haven’t been in a long time.” she said.

Me: “How about the kitchen?”

I think the only reason my husband likes to go fishing so much is that it’s the only time he hears someone tell him, “Wow, that’s a big one!”

As my wife and I prepared for our garage sale, I came across a painting. Looking at the back,

I discovered that I had written “To my beautiful wife on… 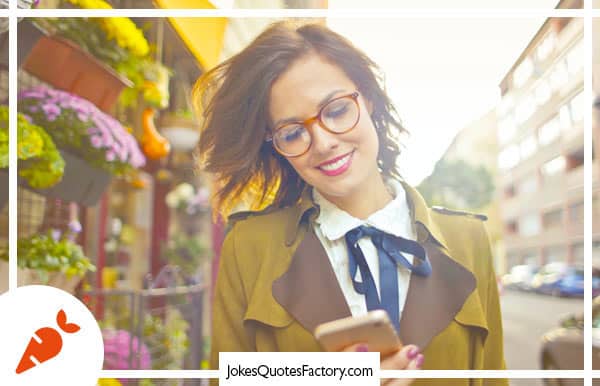 Last but not least, here are the dirty marriage jokes you want to read. Here are some of the funniest and most relatable husband & wife jokes.

What is the difference between a wife and a job?

After 10 years, a job still sucks.

What food diminishes a woman’s sex drive by 69%?

Read: Check out these Food Quotes and Captions That Will Make You Crave For More!

Did you hear about the scientist whose wife had twins?

He baptized one and kept the other as a control.

What do wives and hurricanes have in common?

On arrival, they’re wet and wild. When they leave, they take the house and car with them.

Every successful marriage has two things in common:

(you can obviously swap the roles…)

What is loud and obnoxious? 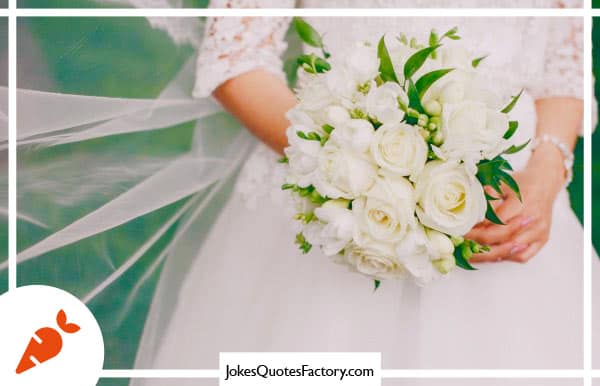 After 12 years in prison, a man  finally breaks out. When he  gets home, filthy and exhausted,  his wife says, “Where have  you been? You escaped eight hours ago!”

Three couples went to a hotel for their honeymoons. They were all served by Jim.

The 1st man was married to a nurse. “Nurses are cute.” Jim thought to himself.

The 2nd man was married to a phone operator. “Phone operators have sexy voices.” Jim thought to himself.

The third man was married to a teacher. “Teachers are too formal and strict. Poor husband!” Jim thought to himself.

3 months after their honeymoons were over, Jim got a call from the first man.

“Never marry a nurse!All I heard was that this is “unsanitary!” he screamed.

A little later, Jim got a call from the second man. “Whatever you do, do not marry a phone operator…All she was my 3 minutes are up!”

Then, the 3rd call came in with the last husband on the phone. “Jim, I can tell you, you should marry a teacher if you can. She keeps saying to me, we are going to do this over and over again until we get it right.”

What’s the difference between a prostitute and a wife?

When my wife gets a little upset, sometimes a simple “Calm down” in a soothing voice is all it takes to get her a lot upset. 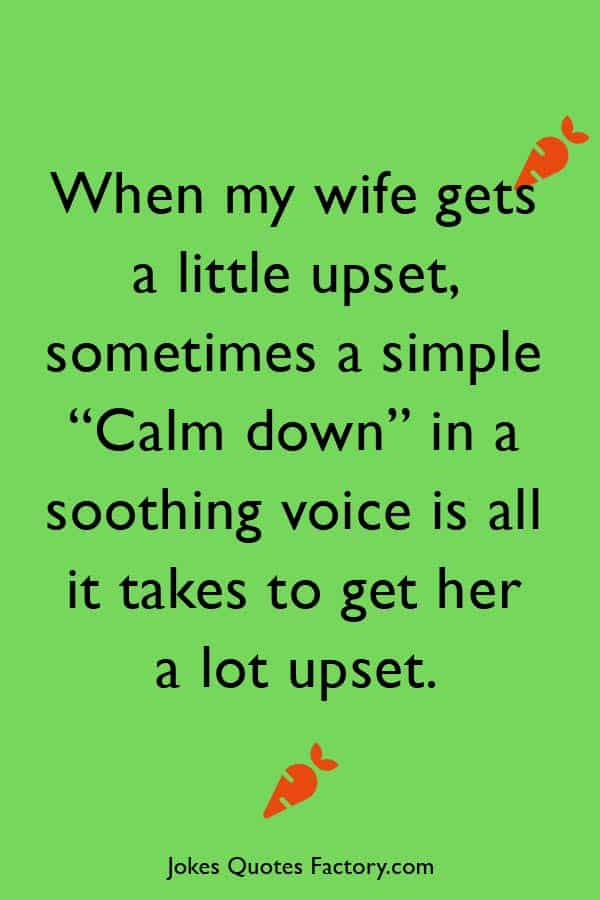 Three words to ruin your husbands ego for the next week:

Husband looks right in the mirror:

When my younger brother and his wife celebrated their first anniversary, they invited the rest of the family to join them for dinner. The conversation focused on the newlyweds and how they happened to meet. Caught up in the romance of the story, one by one the men related how we had met our wives. Eventually everyone had told his story except for my youngest brother.

All eyes were on him when he said, “Oh, Cindy and I met in college. We were matched up by a computer according to compatibility.”

“Oh, no,” he replied with a grin. “They’ve fixed the computer since then.”

Last night my wife and I were having Christmas dinner with her parents and the whole family. We were talking about messing up while cooking meals and I mentioned the first time I cooked a turkey I cooked it upside down.

My mother in law was incredulous that I could make such a mistake. She asked how I could possibly do this when the breast would be round and make it difficult to get the turkey to not roll.

My Wife looks down at her chest: “Well now I feel self-conscious… Wait, is that why you always turn me face down?”

I cannot believe I just married Miss Right. Little did I know until after the wedding, her first name was Always!

A man says to a friend, “My wife is on a three-week diet.”

The man approached the very beautiful woman in the large supermarket and asked,

“You know, I’ve lost my wife here in the supermarket. Can you talk to me for a couple of minutes?”

“Because every time I talk to a beautiful woman my wife appears out of nowhere.”

A couple are sitting in their living room, sipping wine.

“Is that you or the wine talking?” asks the husband.

“It’s me. Talking  to the wine.” says the wife.

There are only two rules for a happy marriage:

1) Your wife is always right.

2) When you think you’re right, remind yourself of rule #1. 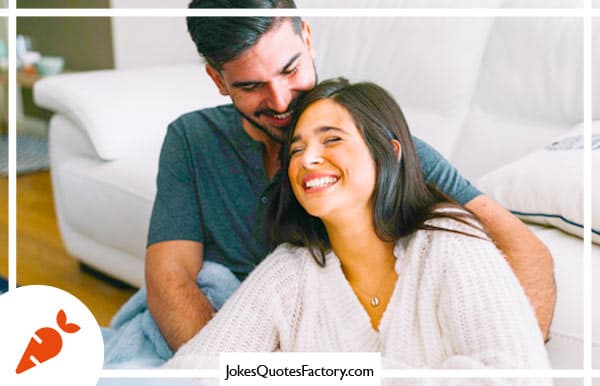 Of course, marriage is about love but that’s not all there is. Marriage is about everything. The love, life, and all the joke in between. Since you stayed until the end, here are more jokes to give you more giggles and laughter: 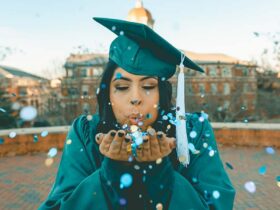 82 FUNNY California Jokes That Will Make You LOL

82 FUNNY California Jokes That Will Make You LOL 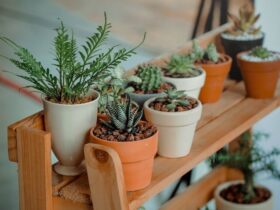