Do you need a little humour in your life? A fantastic way to start your day off in the right path is with one of these funny San Francisco jokes. We have compiled jokes about the city, including some that are ridiculous and others that are corny. Make sure to share these with your friends to get the laughter flowing!

Many attractions can be found in San Francisco. A magnificent skyline, and a rich culture are just a few reasons to visit this city. It’s no surprise that San Francisco is a fantastic source of jokes and amusing stuff because of its abundance of beautiful landscapes and colourful personalities. Enjoy yourself and have a good time!

If you’re in San Francisco and want to wow your buddies back home or simply impress the kids with your wit, you have to keep scrolling and take a look at our San Francisco jokes.

If you drop your wallet in San Francisco, kick it to San Jose, before you pick it up. 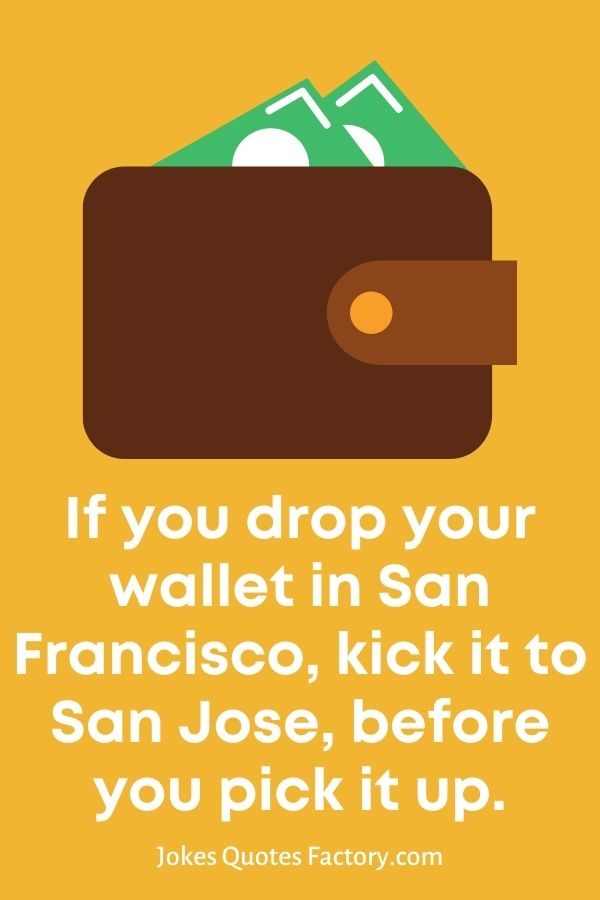 I writing a screenplay for a tv show about a girl with narcolepsy who lives in San Francisco.
It’s called ‘Suddenly Snoozin.’

TIL the mint in San Francisco does not produce any circulating coins.
It doesn‘t make cents!

Why are so many people in San Francisco homeless?
They can’t afford an apartment because they only make 50 grand per year.

How do you get out of San Francisco?
Go straight….

Rube Goldberg was born in San Francisco, CA in 1883.
Those were simpler times.

What do you do if you drop your keys in San Francisco?
Kick them to San Jose. Then pick them up.

Did you hear about the albino clairvoyant master hypnotist from San Francisco?
He was a super pallid Cali mystic, expert at hypnosis.

What do the post office and the San Francisco 49ers fans have in common?
They don’t deliver on Sunday. 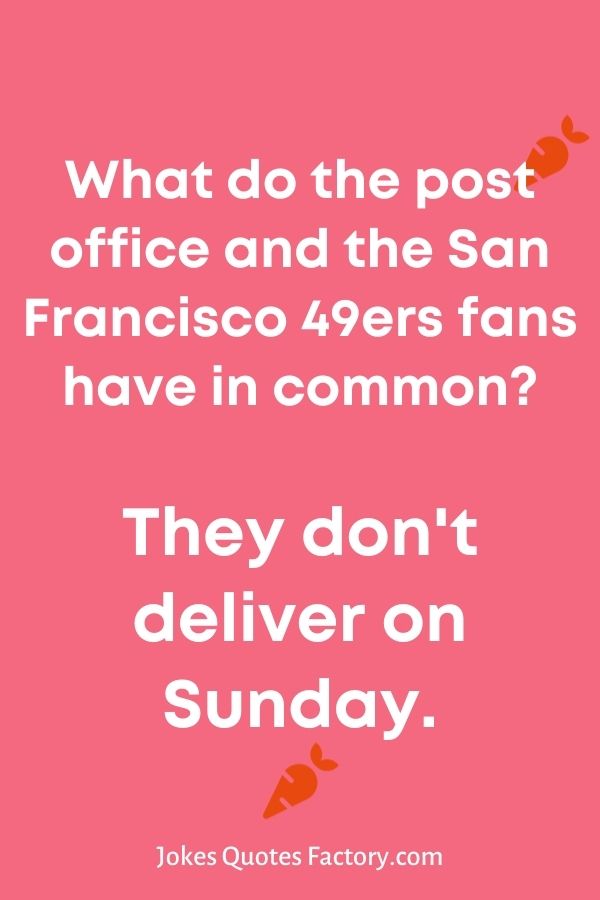 Why is it so cold in San Francisco?
Giant fans.

How do you separate a man from a boy in San Francisco?
With a crowbar.

Why is San Francisco called the granola city?
Because when you take out all the fruits and nuts, all you have left are the flakes.

I heard that San Francisco had to change their team name to the 29ers this year…
Because 20 of them left in the offseason.

Well, there’s a least one positive thing about moving to San Francisco…
Your partner.

I own a shirt from San Francisco
It’s in the closet right now. 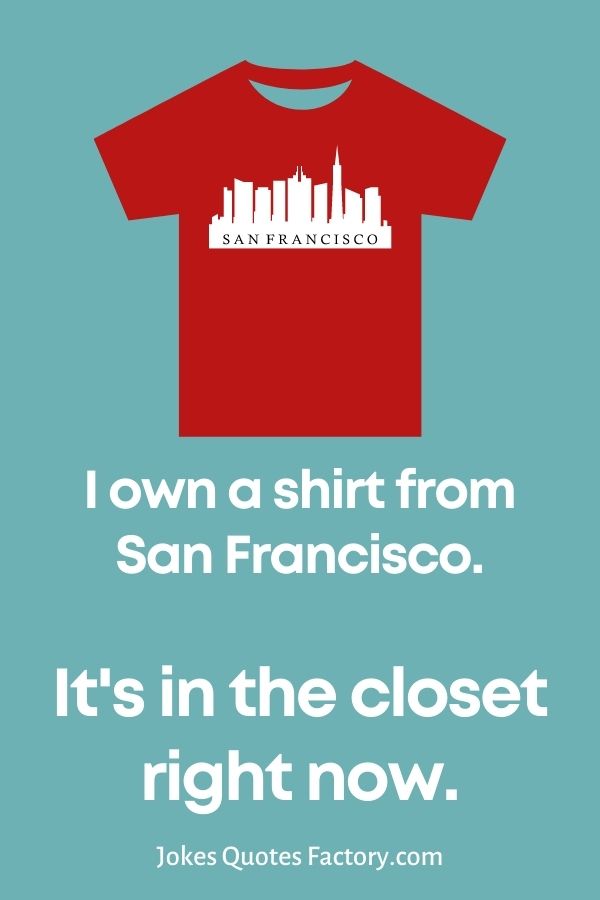 What does the iconic bridge in San Francisco and my favorite shower have in common?
They’re both golden.

What do you call a dog kennel in San Francisco?
Luxury apartments.

This San Francisco One Liners can be handy if you are trying to start a conversation with a local. Don’t forget to memorize some of these jokes.

San Franciscans are very proud of their city, and they should be.
It’s the most beautiful place in the world.

Chicago is the great American city, New York is one of the capitals of the world, and Los Angeles is a constellation of plastic; San Francisco is a lady. 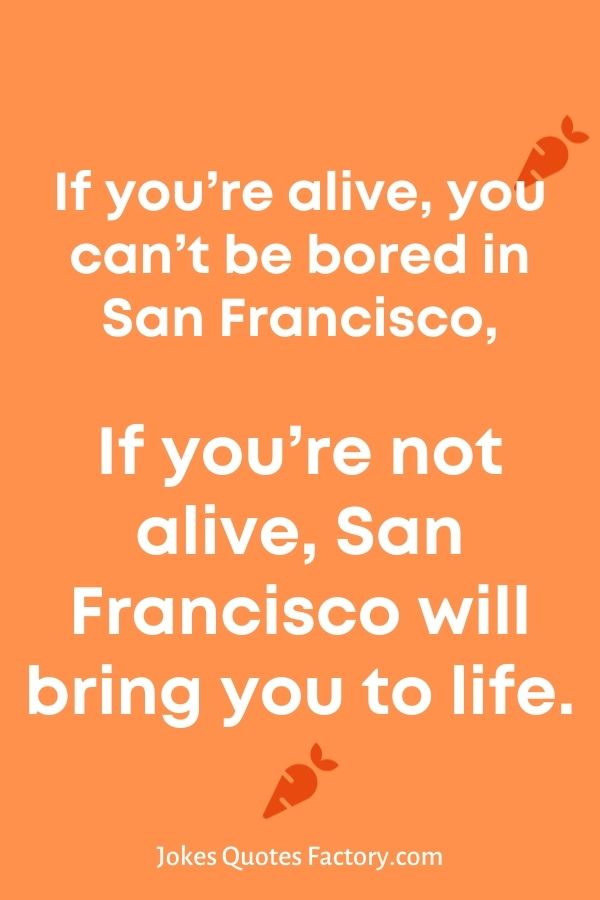 The coldest winter I ever spent was a summer in San Francisco.

San Francisco is a city where people are never more abroad than when they are at home.

The Golden Gate Bridge’s daily strip tease from enveloping stoles of mist to full frontal glory is still the most provocative show in town.

San Francisco is the only city I can think of that can survive all the things you people are doing to it and still look beautiful.

San Francisco has only one drawback –’tis hard to leave.

It’s an odd thing, but anyone who disappears is said to be seen in San Francisco.

I’m just mad for San Francisco.
It is like London and Paris stacked on top of each other. 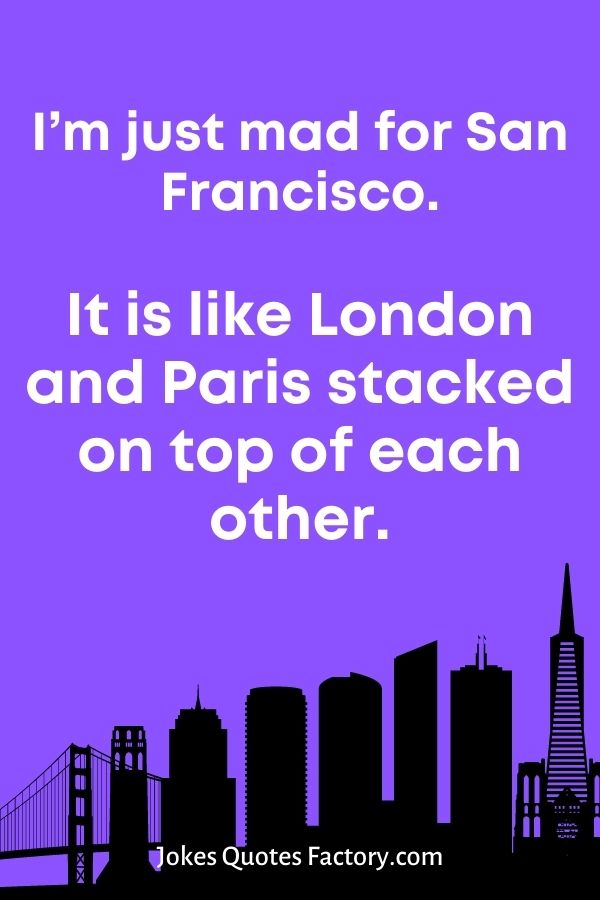 San Francisco is perhaps the most European of all American cities.

East is East, and West is San Francisco.

Every man should be allowed to love two cities, his own and San Francisco.

Leaving San Francisco is like saying goodbye to an old sweetheart, you want to linger as long as possible.

Looking for some hilariously horrible puns about San Francisco that will make your closest friends and family laugh? Here you go and have fun!

The streets here are San Frenetic.

I’m going to Haight it when I have to leave San Francisco. 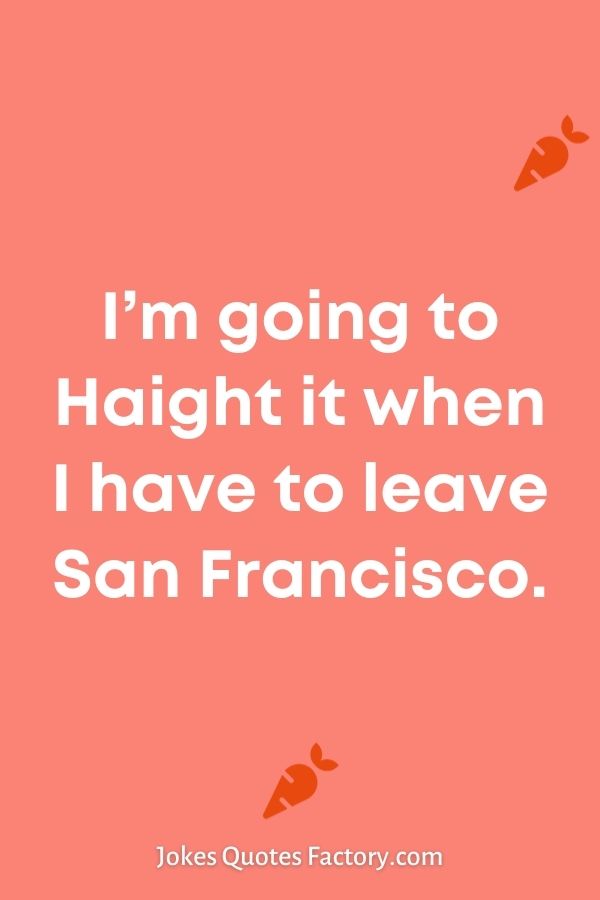 I’m going to Embarcadero on a Mission to explore San Francisco.

I love the San Francisco Bae.

This city is so Alcatra-ctive.

There so SoMa-ny reasons to love this city.

Is the San Francisco Bay Area winning your heart? Not everyone can afford to experience its beauty, so savor it while you can. Have more fun with our hilarious jokes about bay area.

What do you call a Significant Other that lives in San Francisco?
A Bay-Bae.

The Bay Area is so beautiful, I hesitate to preach about heaven while I’m here. 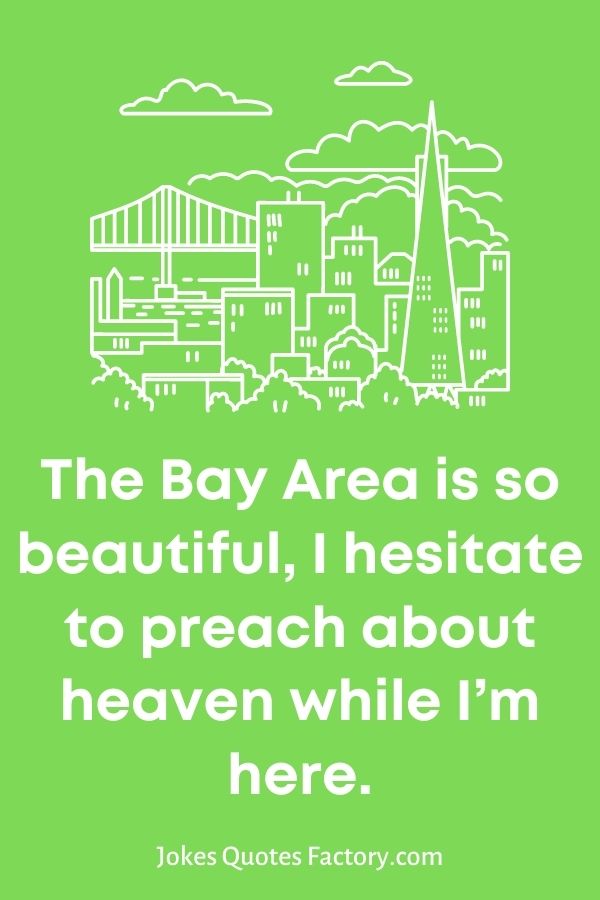 What do you call a seagull living in San Francisco?
A baygull.

What do you call someone who makes cakes in San Francisco?
A BAYYYYker.

Keep these Golden Gate jokes in mind while you’re in California. Have a good laugh and share it with your friends!

Did you hear about the registered donor who had a car crash on the Golden Gate Bridge?
He left his heart in San Francisco.

Have to seen the Golden Gate Bridge in the fog?
It looks so mist-ical!

Why doesn’t Karl the Fog visit cities other than San Francisco?
Because he’s a monoga-mist.

What did the engineer say to the bridge after it had collapsed?
I trussed you! 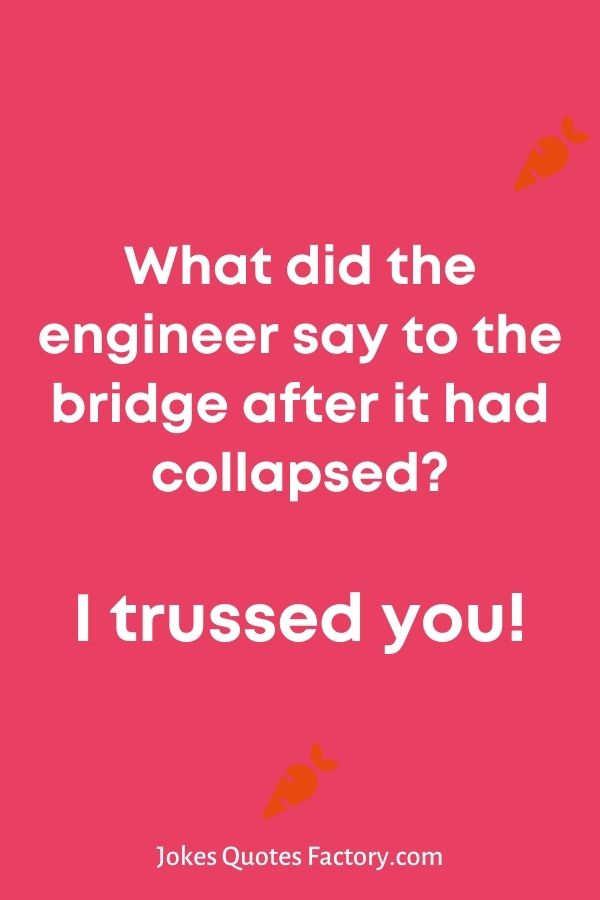 What do you call a polite bridge-builder?
A civil engineer.

Did you hear about the big storms in San Francisco?
It’s all water under the bridge now.

What language does the Golden Gate Bridge speak?
Span-ish.

I watched a documentary on how they built the Golden Gate Bridge.
It was riveting.

The Golden Gate Bridge’s new slogan.
The jump of a lifetime.

Have you heard the don’t need the golden gate bridge any longer?
Because it’s already long enough.

It costs around $7 to cross the Golden Gate Bridge, regardless of whether you’re a commuter or a tourist.
It takes a toll on everybody.

Why did the chicken refuse to cross the Golden Gate Bridge?
He found it to suspenseful. 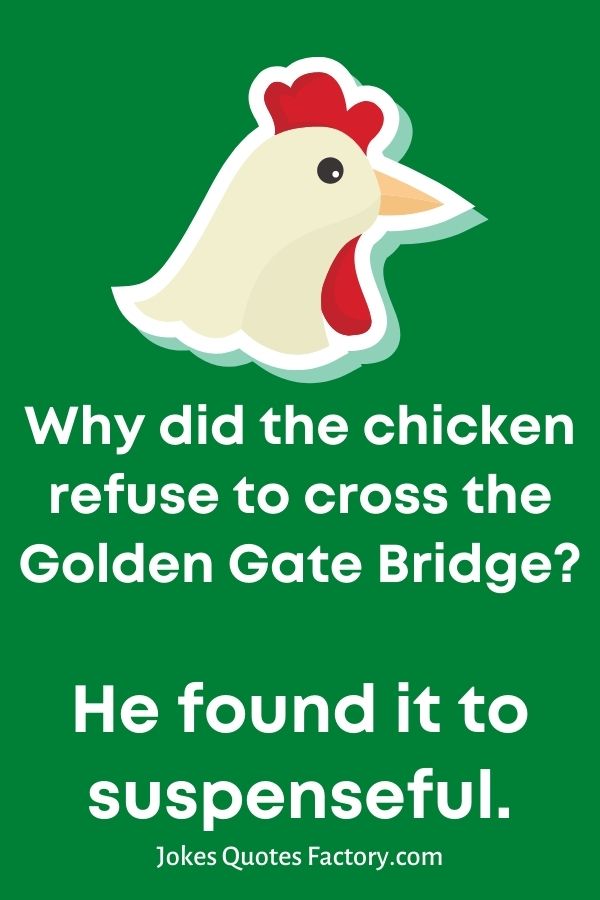 The Golden Gate Bridge is one of many things that make San Francisco famous. It’s no surprise that many tourists want to photograph their experiences while still in there.  Take a look at our Golden Gate captions that you can use on Instagram.

Chillin’ on the best coast.

Chillin’ in the San Francisco hills.

I fell in love. His name is San Fran.

Dear San Francisco, I will never get over you.

I can finally tick San Francisco off my bucket list.

Nothing comes close to the Golden Coast.

San Francisco is a golden handcuff with the key thrown away. 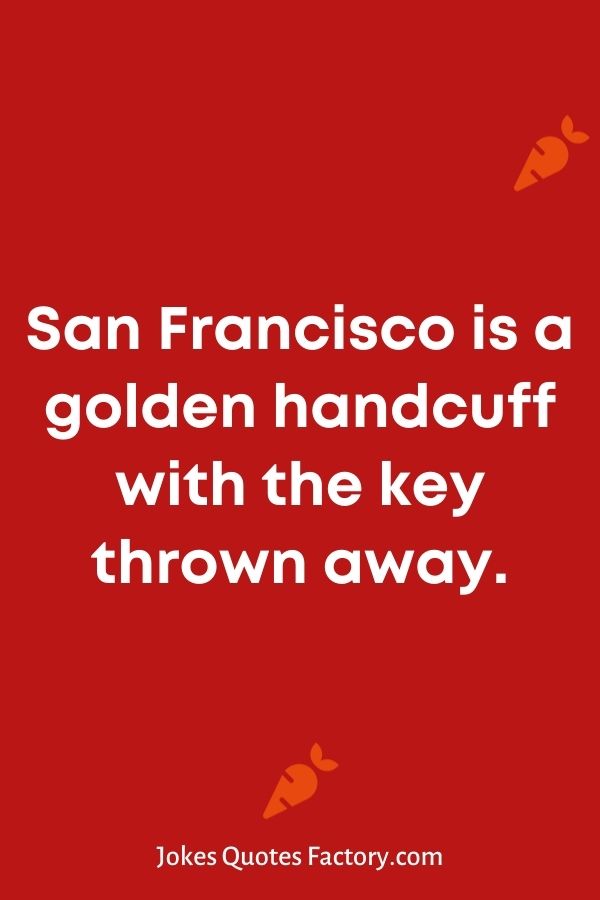 I prefer a wet San Francisco to a dry Manhattan.

America only has three cities: New York, San Francisco, and New Orleans. Everything else is Cleveland.

It is an odd thing, but everyone who disappears is said to be seen in San Francisco.

In that San Fran state of mind.

I left my heart in San Francisco.

Let’s run away to San Francisco.

I’m having an affair with San Francisco.

Lombard Street is the most famous street in the world if you ask us!  It is known as the “Crookedest Street in the World.” Every year, millions of people stroll or drive down its eight hairpin curves because why not!

Nothing goes better with a beautiful photo than a cute caption.

It’s been a while, San Francisco – I’ve really mist you.

Sea-sing every moment in San Fran.

Happy as a clam at Fisherman’s Wharf.

I tried to catch some fog. I mist.

This view makes my heart sing.

You can leave San Francisco, but it will never leave you. 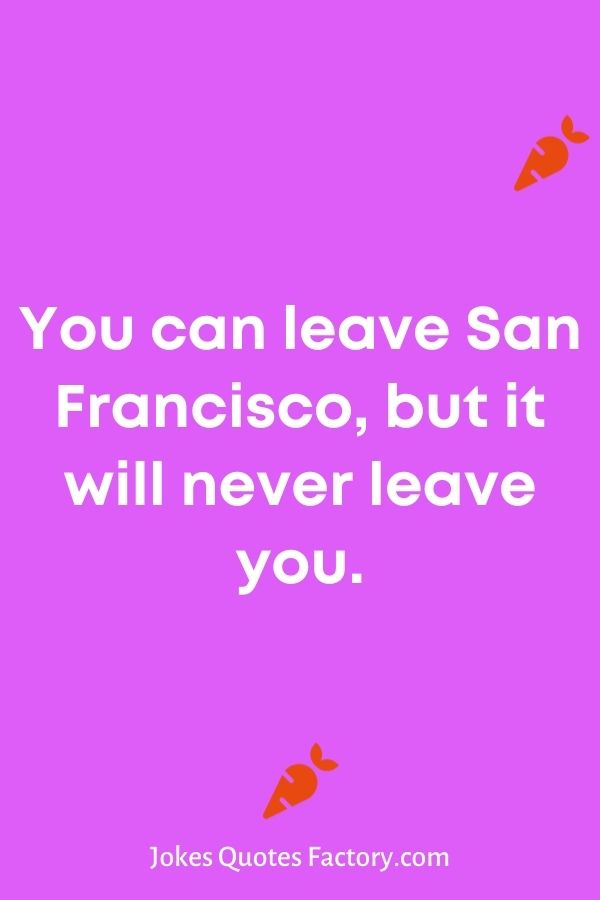 Follow your heart, even if it takes you all the way to San Francisco.

This is what dreams are made of.

I left my heart in San Francisco.

Either you love San Francisco or you are wrong.

There’s no time to be bored in a world as beautiful as this.

San Francisco is the city that other cities can only dream of being.

Constantly searching for views that take my breath away.

May everyday bring a new adventure. 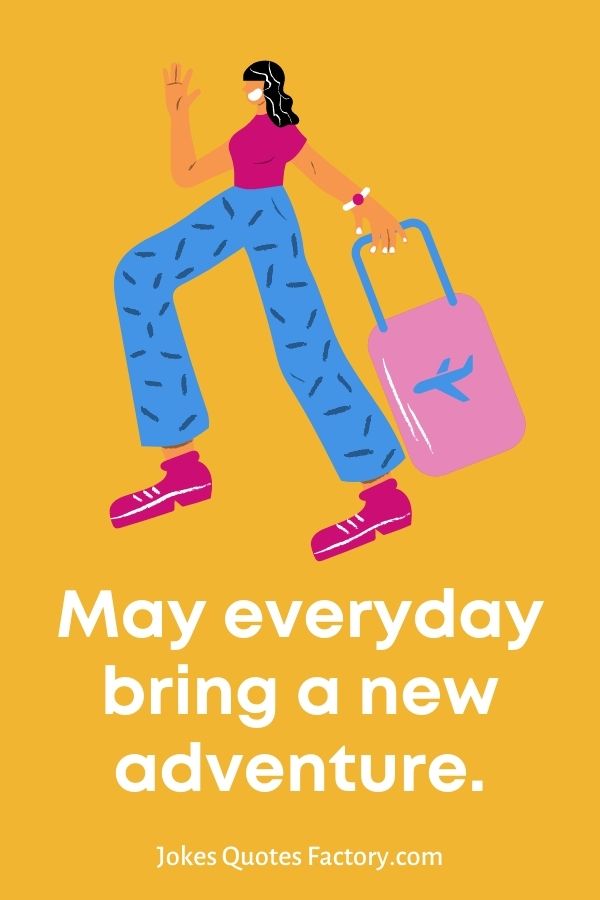 We appreciate you taking the time to read our collection of San Francisco jokes. We’d love to hear your jokes about San Francisco! Don’t forget to share it with us and comment it here.