Paris is the dream destination of every girl in the world! Eifell tower, wine, beautiful spots, and romantic scenes are the things that we are expecting from this destination. You have to admit it, Paris is one of the most beautiful cities in the world. These Paris jokes will make you fall in love with the city all over again.

The Louvre Museum, Notre Dame Cathedral, and the Eiffel Tower are some of the most well-known attractions in the world. It has earned a reputation as a romantic and culturally rich destination. The city is also well-known for its high-quality cuisine as well as its cafés with outdoor patios.

Take a look at and laugh at our Paris jokes.

Look no further if you want to wow your French friends with the funniest jokes about Paris they’ve ever heard. Everyone will be laughing over this list.

What would high definition be called if invented in Paris?
The French resolution! 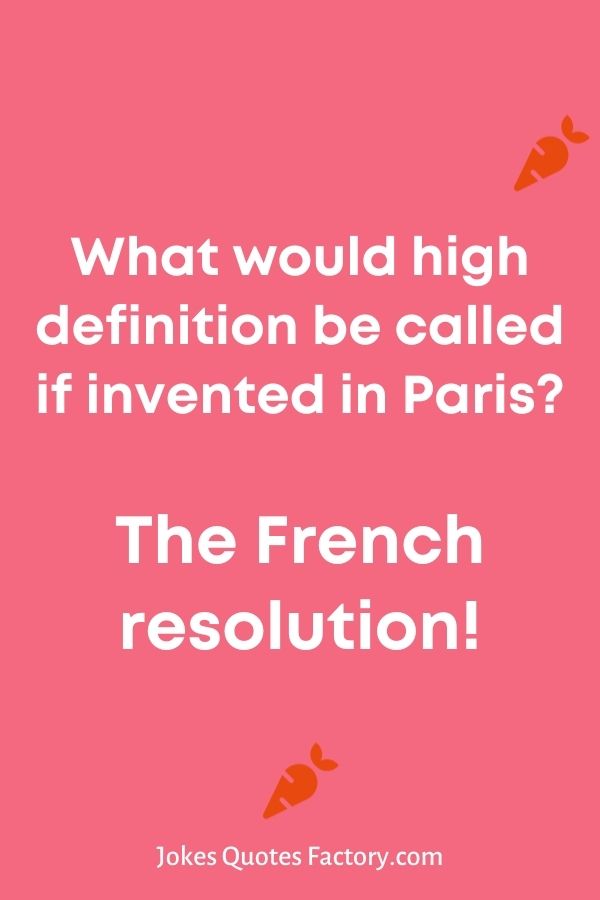 Why does Paris have so many beautiful tree-lined streets?
The German army prefers to march in the shade.

How many men does it take to defend Paris?
No one knows, it’s never been tried.

A French cheese factory blew up in rural Paris.
There was de brie everywhere on the floor.

This is the first year I’m not going on vacation to Paris because of covid.
Usually, I don’t go because I can’t afford it.

What did the American say to the guy next to him at the public loo in Paris?
European.

I had an idea for a movie plot where a retired CIA agent searches for his kidnapped daughter in Paris,
but it turns out that idea was taken.

Last night rioters destroyed the famous Etampes Cheese Market in Paris.
All that was left was de-Brie.

Did you guys hear about the new museum opening in Paris for funky music?
It’s called the Grouvre.

I tried to order a couple of eggs for breakfast in Paris.
The waiter said, “One egg is an oeuf!” 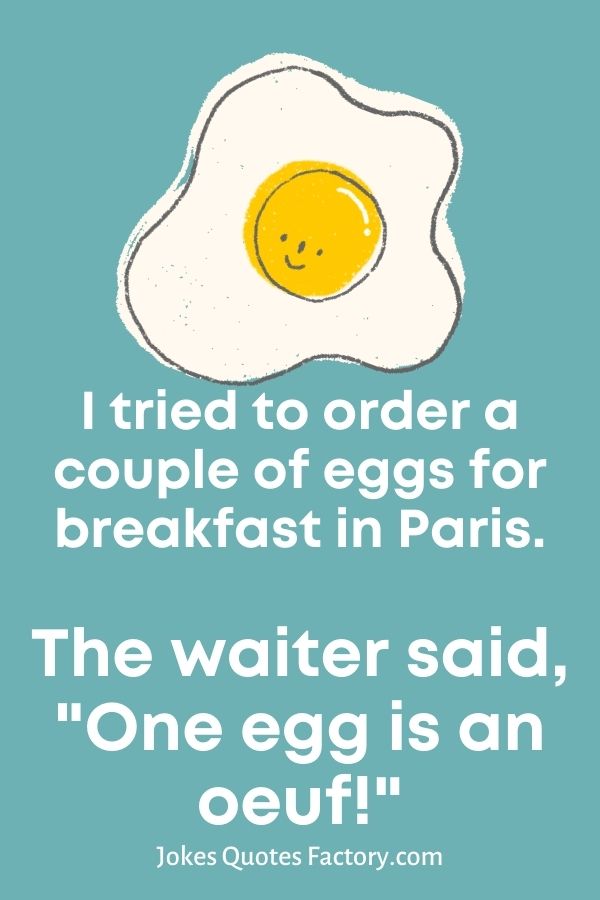 In Paris, a man was beaten to death with a baguette.
The French police raid several apartments: ”We are looking for Le Pain Killer”

A bomb just went off in a Paris cheese shop.
There is de brie everywhere!

We are telling you that these puns are the best and there’s notre dame thing you can do about it.

I tried climbing that tower in Paris but Eiffel.

The city of love has my heart.

Buy one, baguette one free.

Paris is a very France-y city.

The price of a dinner cruise in Paris is in-Seine. 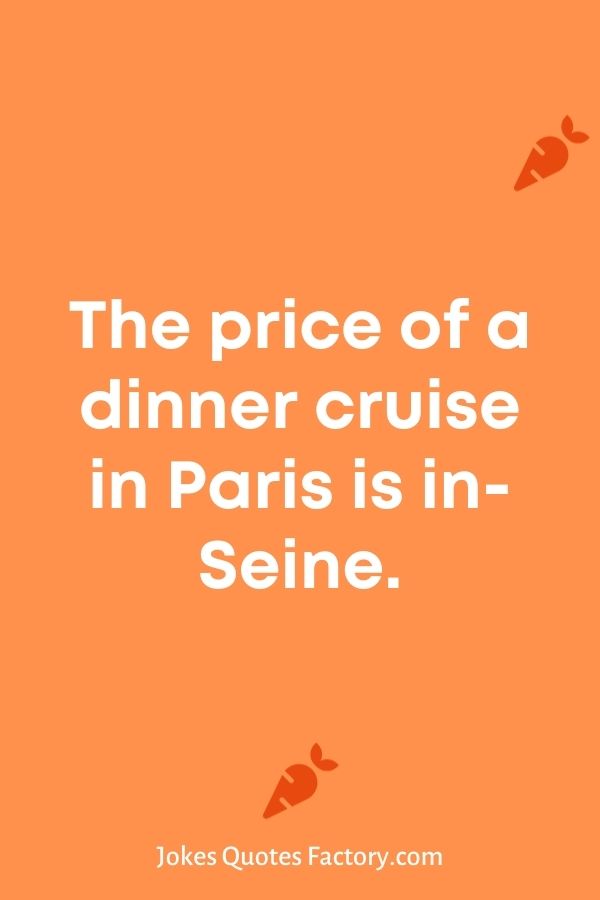 I always feel Triomphe-ant in Paris.

You must be from Paris because you’re driving me in-Seine.

Frankly, my dear, I don’t give a Notre Dame.

I couldn’t come to Paris without my French coat.

People here are in-Seine for drinking so much wine.

In Paris it’s kind of weird that pets stare at you while European.

Paris, Marseilles, and Lyon are all great French cities.

We love Paris, but finding the right words to describe it may be difficult. So allow us to assist you with this. We’ve compiled a handful of Instagram captions that you may use to compliment your beautiful images.

“How can you complain in a place like Paris?” 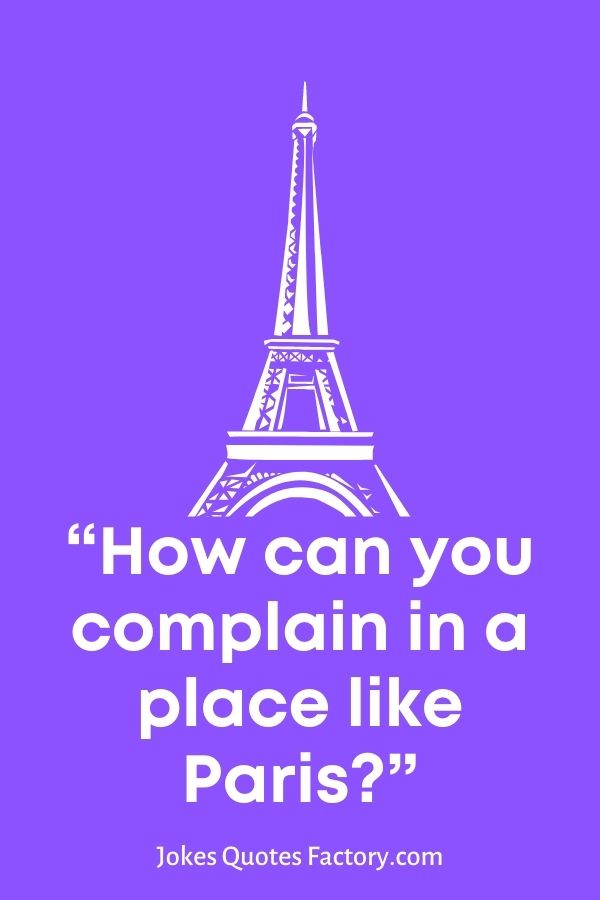 “The City of Love has my heart.”

“This view never gets old.”

“Excuse my French, but I’m in France.”

“Enjoying life one crêpe at a time.”

“This is my new happy place.”

“Here for the views and croissants.”

“Take me back to Paris.”

“Got the world at my fingertips.”

“Paris is calling and I must go.”

“When I’m in Paris, the world is my oyster.”

“I couldn’t come to Paris without my French coat.” 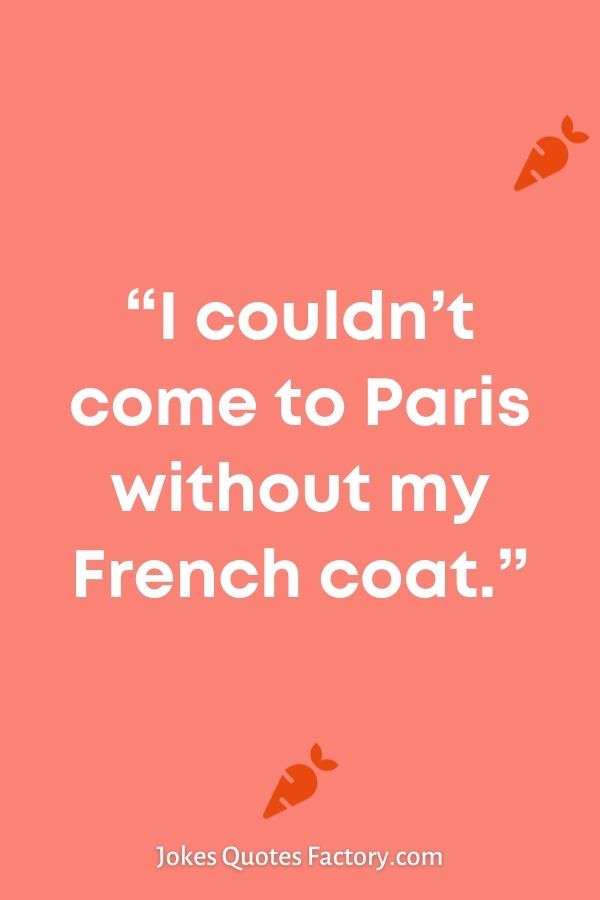 “Meet you at the Eiffel Tower.”

“Paris is a city of dreams.”

“There is no cure for Paris.”

“Paris, you had me at Bonjour.”

No need to go on a treasure hunt for French humor. This collection can help you find many jokes about France.

How do you keep a French person from crashing your party?
Put a sign up that says “no nudity”

Why do French People eat snails?
Because they don’t like fast food!

How does every French joke start?
By looking over your shoulder. 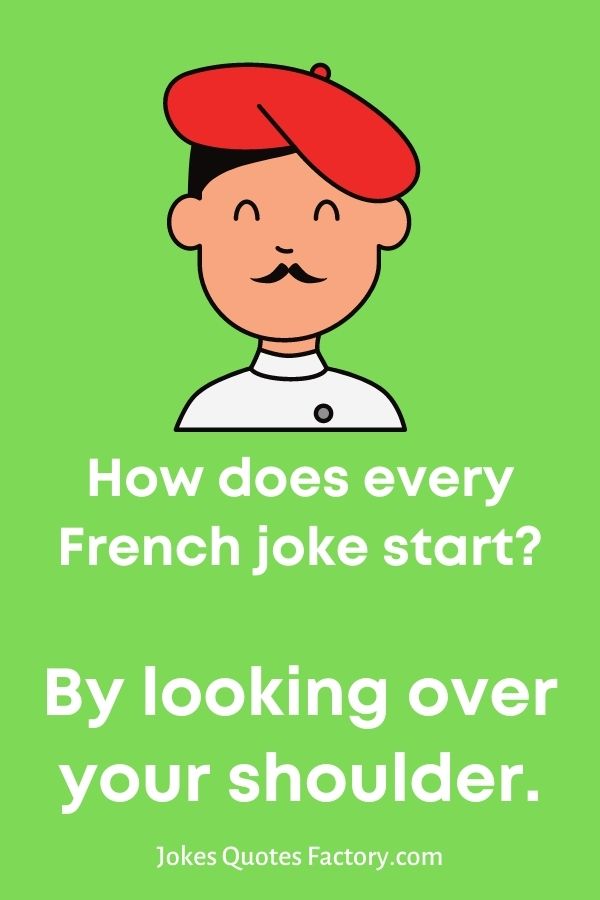 What is the Guillotine?
A French chopping centre.

Which ghost was president of France?
Charles de Ghoul.

Where do fruits go on vacation?
Pear-is.

What do you get when you drop a nuclear bomb over Paris?
French fries.

Did you hear about the Frenchman who jumped into the river in Paris?
He was declared to be in Seine.

Did you hear about the winner of the French beauty contest?
Me neither.

What is the other way to spell the name of the French president?
Jacques ChIraq.

What is the most useful thing in the French Army?
A rearview mirror, so they can see the war.

How do you stop a French tank?
Shoot the guy that’s pushing it.

What do you do if a Frenchman throws a hand grenade at you?
Take the pin out and throw it back. 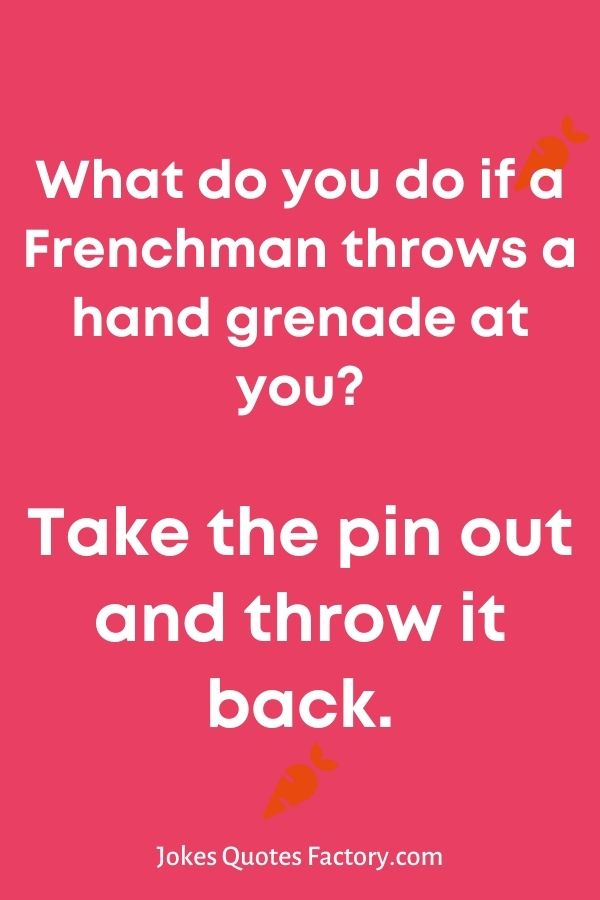 We’ve compiled a funny selection of the finest puns about France just for you. Check it out! These puns are so awful that they are really amusing to us.

Enjoy your vacation! Right baguette ya!

There are so many things to do here that you can’t get Bourdeaux-ed.

Wow, this city is so Nice!

We can’t wait to start our French Tours!

I tripped in France. Eiffel over.

I Cannes see the French Riviera from here!

When in France, we only have breakfast from the Champignons.

The food in France is Brie-ond belief!

I love to meet new people and make new France-ys while travelings. 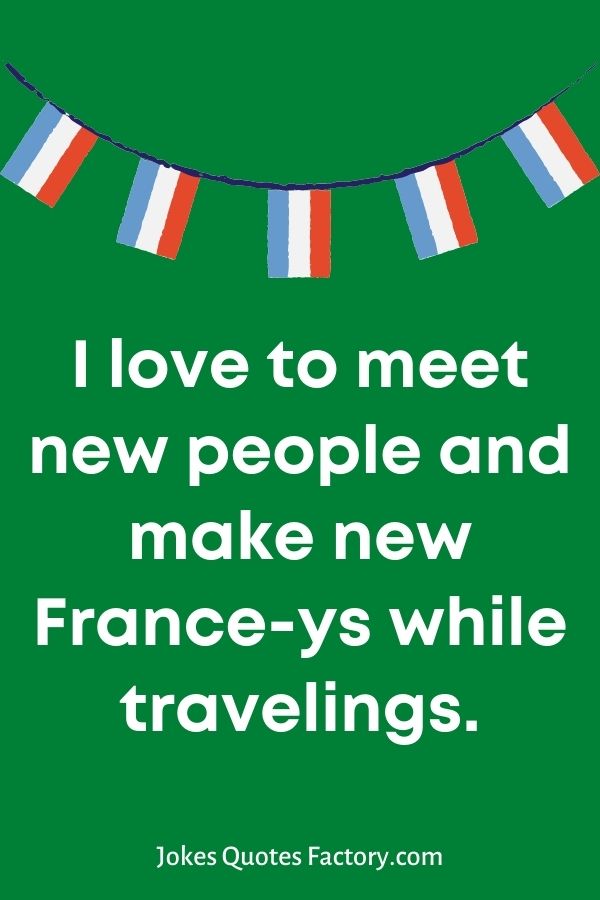 Paris is such a France-y place!

I Musee, the french have great taste in art.

When in France, I have Nantes-thing to complain about.

Haunted French pancakes give me the crepes.

We were in such Henry to get to France.

You better baguette about it!

Whether you’re planning a trip to France or just uploading a flashback snapshot, feel free to include one of these French jokes in the caption of your photo.

Why should you never joke about French history?
Because it is nothing to Lafayette. 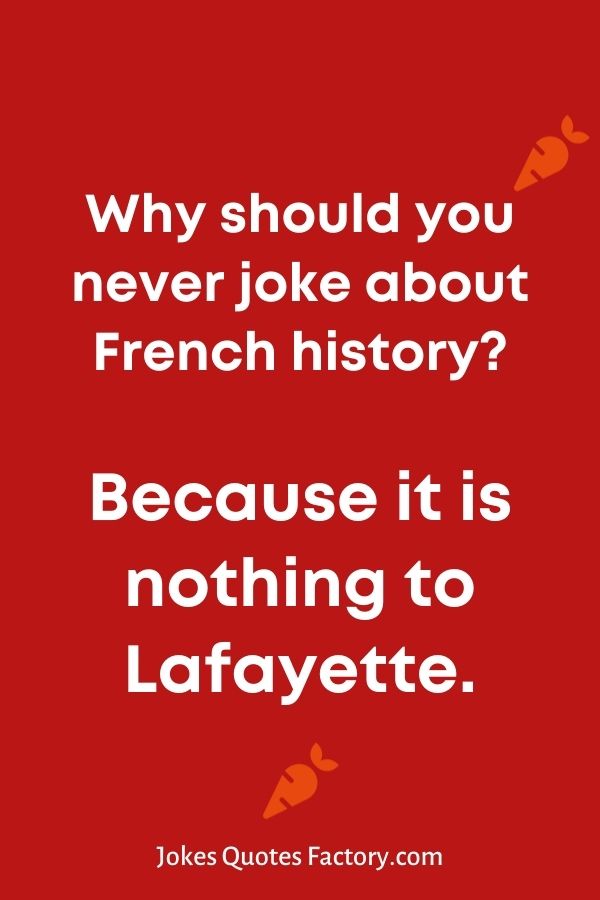 What did the husband say to his French wife when they were going on a trip?
How did you Charlemange-age to pack so many things?

What did the French woman say to the receptionist at the airport?
I am in great Henri to visit France!

How did the French leader Napoleon have fun?
By throwing a Bonapart-y.

How does a French person greet someone in America?
By saying “Welcome to Louis-ville.”

What did the French friend answer when he was asked to wear a costume for the party?
I will come in dis-Guise.

What did the mother say to his son when he verbally abused her?
I can’t believe you have the de Gaulle to say that to my face.

What seems to be the quietest sports in France?
Para-shooing.

What did the loanshark say to the Frenchman who loaned some money?
When you come back, you better have my Monet.

How does one usually feel after visiting France?
Fin-tastic.

What type of photography do French photographers like?
Candide.

What did the French lover say to his wife who was late for work?
It is time for Hugo to work, mon cherie.

Why does everyone love visiting France?
Because it is beautiful in every Cezanne.

What did the tourist decide after visiting France for the third time?
He wanted to Gauguin. 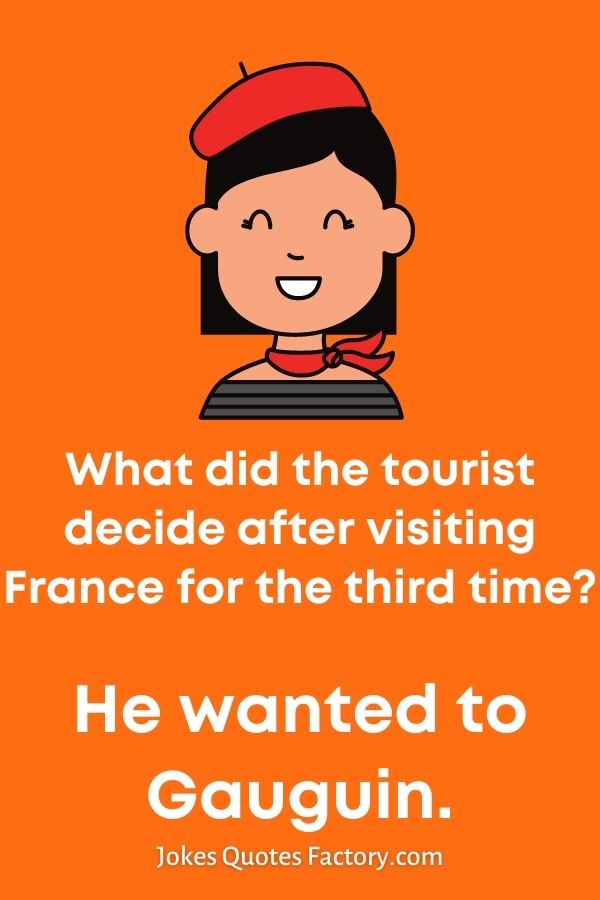 We are well aware of how tough it can be to come up with a catchy caption, which is why it is often easier to just use a witty joke about the Eiffel tower. Take a look!

Did you hear about the man who jumped off the Eiffel Tower?
He was in Seine.

What do a tick and the Eiffel Tower have in common?
They are both Paris sites

I just saw a great documentary on how they built the Eiffel Tower.
I’m not gonna lie, it was riveting.

Why are the Eiffel Tower lights so bright?
French resistance is low.

Did you know that Eiffel Tower was named after the engineer who designed and built the tower?
Mr. Gustave Tower.

When my wife asks me to jump, I ask “how high?”
I think she’ll be really impressed when I take her to the Eiffel Tower tomorrow.

Personally, I would never go to see the Eiffel Tower in cloudy weather.
I don’t see the point.

How do you make French bread?
With Eiffel flour.

What did the guy jump off the Eiffel Tower?
He was in Seine! 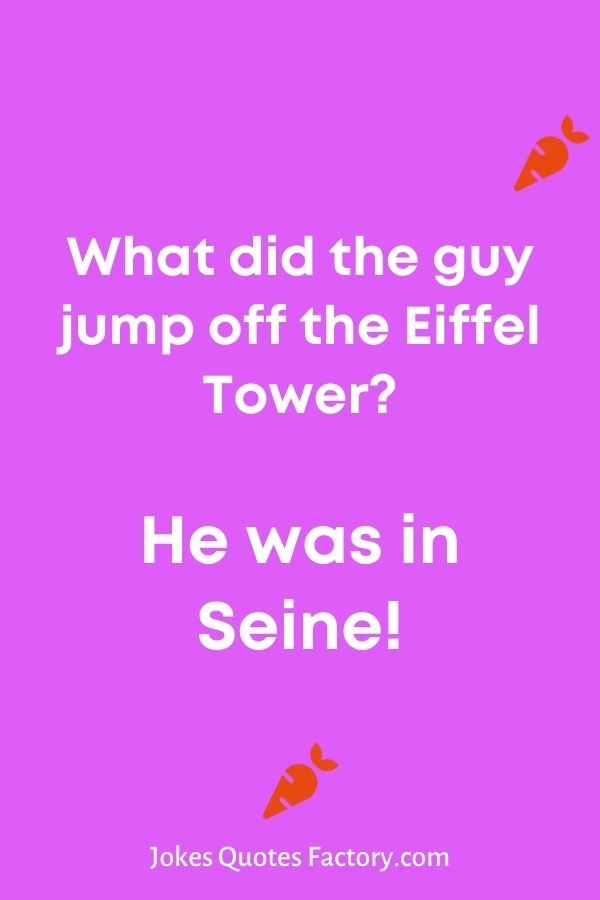 What did the clock say when it got to the top of the Eiffel Tower?
Time’s up.

Have you heard of the tallest tower in France?
It’s a real Eiffel.

What happened when I jumped off a famous building in France?
Eiffel

Here are some interesting Instagram captions and funny Paris captions that you should check out!

Going in Seine over this city!

I gotta say, I’m starting to see the Point of the Louvre.

The food in Paris is Brie-ond belief!

In Paris, I wake up every day to a breakfast of Champignons.

It was my greatest Arc de Triomphe.

So sad to say Versailles to Paris.

Bring your jacket to Versailles, it’s very gold there! 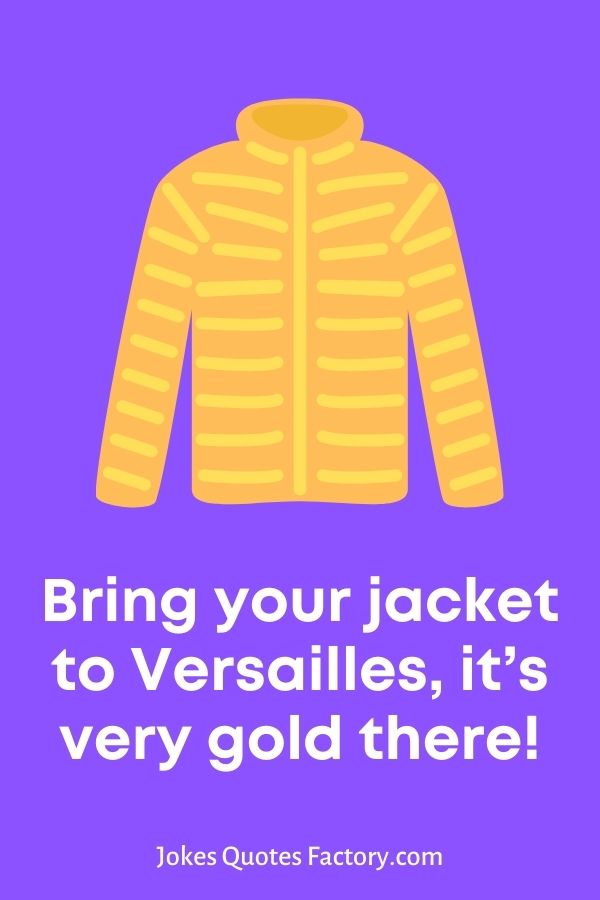 Don’t come to Paris with no Monet.

In Paris, they give zero faux.

Paris is so delicious that they should call it the City of Bites.

Was this post on Paris jokes and puns entertaining to you? Then spread the love by checking out other jokes and you may find them interesting as well! 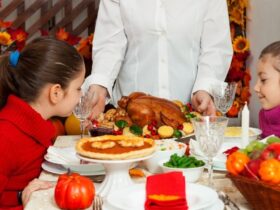 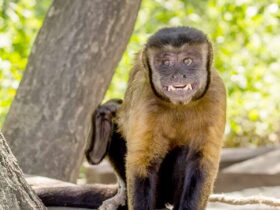 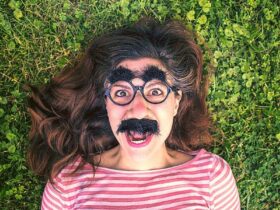