For those of you who have a Star Trek fandom in your family, you’re going to enjoy our ultimate compilation of the funniest Star Trek jokes in the galaxy. A classic joke is always a hit with kids, and it’s even better when it’s connected to one of their favorite movies or television series. We’ve compiled a list of hilarious jokes to keep them entertained.

Here we have the most hilarious jokes from your favorite science fiction show. Even if you’re not a Trekkie, you’ll laugh out loud at these hilarious Star Trek jokes!

You may also want to check these jokes.

These jokes about Star Trek will have the kids laughing like they’ve never laughed before, and we are sure that you will be laughing along with them.

How does a Romulan frog stay camouflaged?
He uses a croaking device! 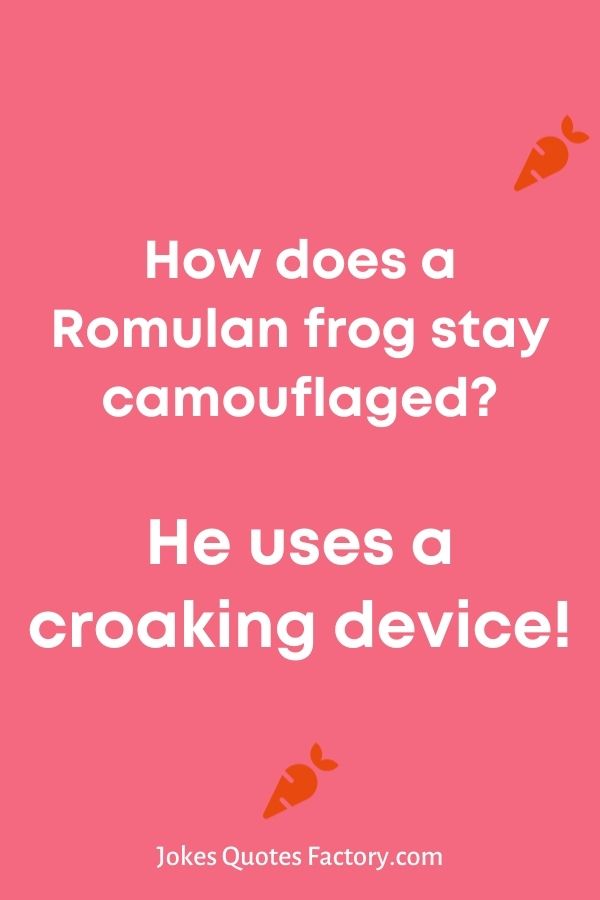 Why did Riker die from friendly fire?
Because Picard ordered “Fire at Will!”

What do you call two science officers having an argument?
Science Friction!

If Spock has pointy ears, then what does Scotty have?
Engineers!

Why is Star Trek so successful?
Because it has good Genes!

What illness did everyone on the Enterprise catch that made them red and itchy?
Chicken Spocks!

What did Scotty say when little shards of ice began hitting the Enterprise?
“Captain, we are being hailed!”

What do you call a Klingon with half a brain?
A genius!

Why did the Enterprise have to go to the garage for repair?
It needed new Spock plugs!

What is Commander Riker’s favourite hobby?
Sewing, because Captain Picard is always saying “Make it so!”

Where do the Borg go to eat fast food?
Borger King! 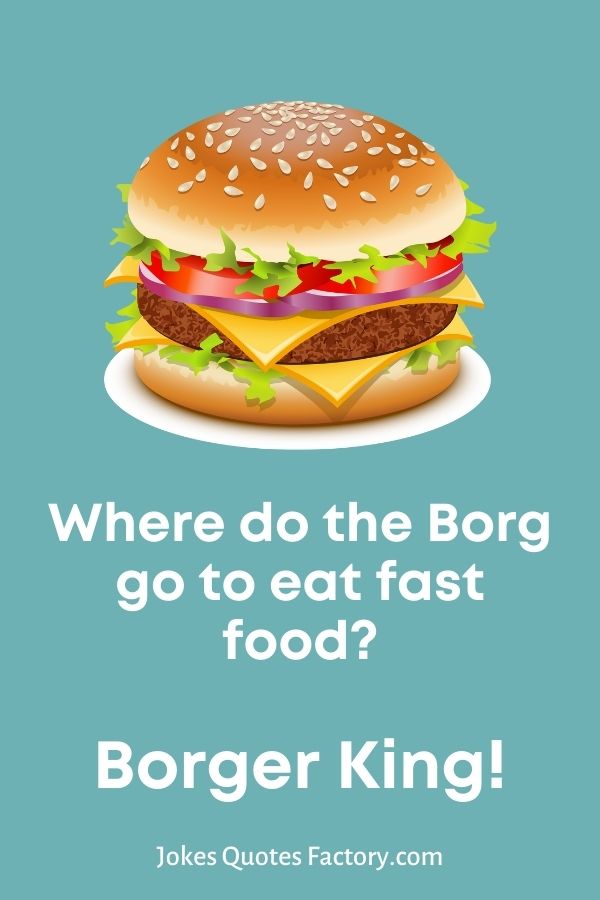 What’s it called when a crew member on Deep Space 9 runs as fast as he can?
Worf Speed!

What are glasses called on planet Vulcan?
Spocktacles!

How do you stop yourself from falling out of a Bird of Prey?
You have to Klingon!

How do you get a one-armed Klingon down from a tree?
Wave to him!

This collection of fantastic Star Trek one liners will make Captain Kirk laugh out loud. Have fun!

Did you hear about the Klingon’s plan to wrap the Enterprise in silver paper?
Luckily, the plan was foiled!

When Star Trek fans go to a convention, they always get a gift.
It’s called the enter prize!

Did you hear that Kirk is getting married?
He engaged the Borg!

Did you hear about the Captain of the Enterprise?
He had a one trek mind!

I accidentally went to a Star Trek convention dressed as Chewbacca from Star Wars,
What a Wookie mistake!

A Klingon and a red shirt get into a fight;
the Klingon misses every shot, but the red shirt dies anyway! 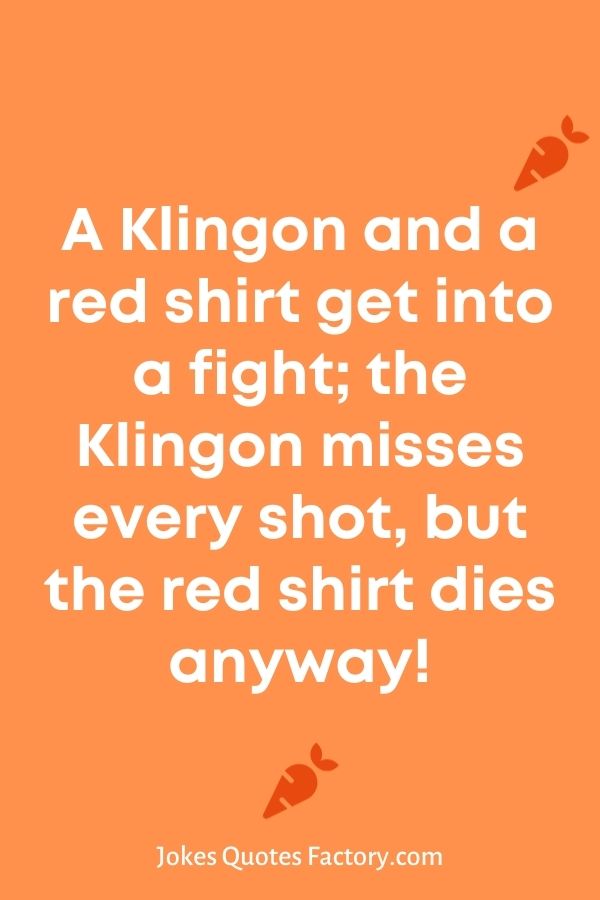 Is Star Trek your favorite show? You will be able to relate to these hilarious Star Trek inside jokes that we have put together for you. Look over the list and be ready to share it with your friends.

How many Borg does it take to change a light bulb?
All of them, because they are one!

How do you get a one armed Klingon down from a tree?
Wave to him!

How many Klingons does it take to change a light bulb?
None. Real warriors aren’t afraid of the dark!

How many Klingons does it take to change a light bulb?
Two. One to change the bulb and one to shoot the first in the back and take all the credit!

I tried to sneak into a Star Trek convention disguised as a Doctor.
The security guard suspected I was not the Real McCoy.

How do you say where is the bathroom in Klingon?
nuqDaq ‘oH puchpa”e’

Data is an interesting character in Star Trek. He is an android with an artificial intelligence system implanted into his body. Have fun with these jokes.

Why was Captain Picard so confused when the android disappeared?
Because they’d lost their Data!

The Star Trek crew couldn’t use the internet outside of WiFi range.
They didn’t have commander data with them.

Why did the chicken cross the road?
Mr. Data: Why is a barn yard fowl crossing a thoroughfare humorous? 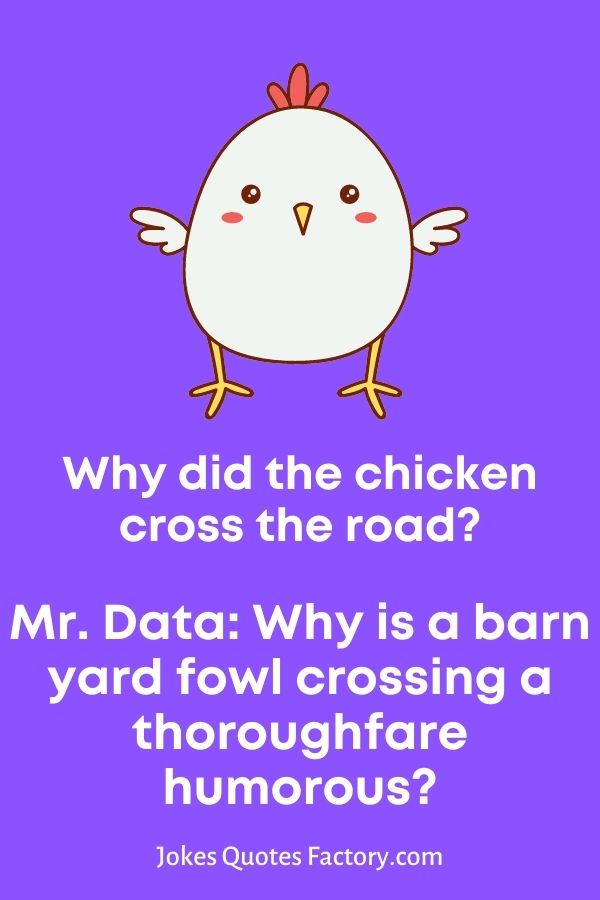 What does every Star Trek fan ask for from a mobile network?
Unlimited Data.

If I have a son I will name him Data, after Mr.Data from Star Trek.
If it’s a girl, we’ll pronounce it Data.

Captain Kirk built a reputation for himself as one of the most entertaining and well-liked pop culture celebrities of all time.

Did you hear Kirk reciting verse at Warp Speed?
It was poetry in motion!

How many ears does Captain Kirk have?
Three. A right ear, a left ear, and a final front-ear!

What did Mr. Spock find in Captain Kirk’s toilet?
The Captain’s Log! 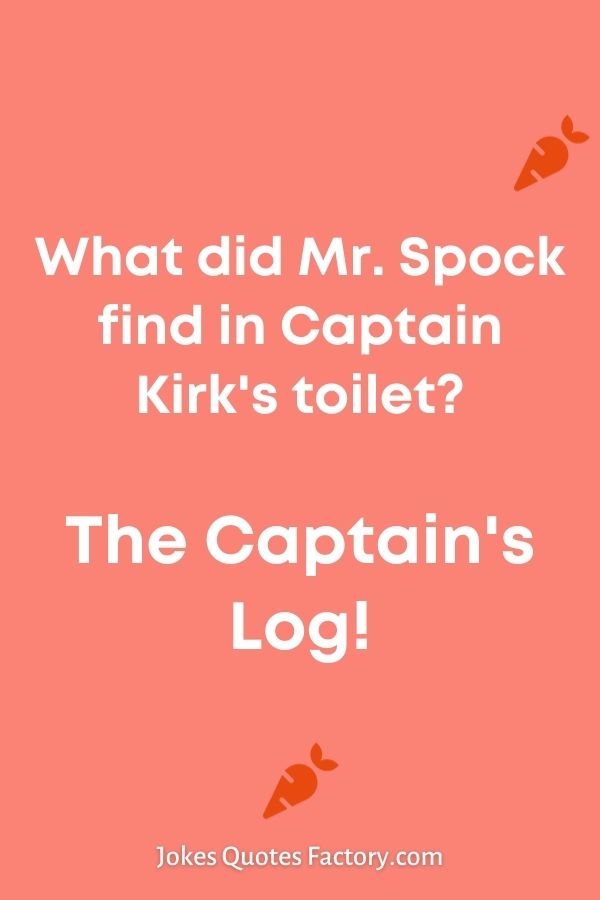 William Shatner, Star Trek’s Captain Kirk, is said to be extremely disappointed after the collapse of his recently launched women’s underwear business…
Apparently, nobody was interested in buying ‘Shatner Panties’.

What would Captain Kirk be called if he wrote poetry?
Prose and Khans.

What did Captain Kirk do when his girlfriend told him she had a defecation fetish?
William Shat-on-her

Why did Captain Kirk take such a long time in the washroom?
Because he was fighting the Klingons.

Captain Kirk told his girlfriend he was into scat…
…then he Shatner.

Star Trek does a terrific job of tapping into the broader cultural conversation that is why many people love it. There are philosophical, ethical, and social experiments in the show as it seeks to explain future technology and humanity.

While you are on it, check out these jokes!