There are museums dedicated to history, military, contemporary and ancient art, seafaring, science, and portraits in London, as one would expect in a huge metropolis. The most of them are free, which is a huge bonus given the high expense of living in London.

We hope that you will like our funny quotes about London Eye, London jokes and puns as much as you enjoy the city of London. Share it with friends.

Why does no one arrive late in London?
Because there is a big clock in the middle of the town. 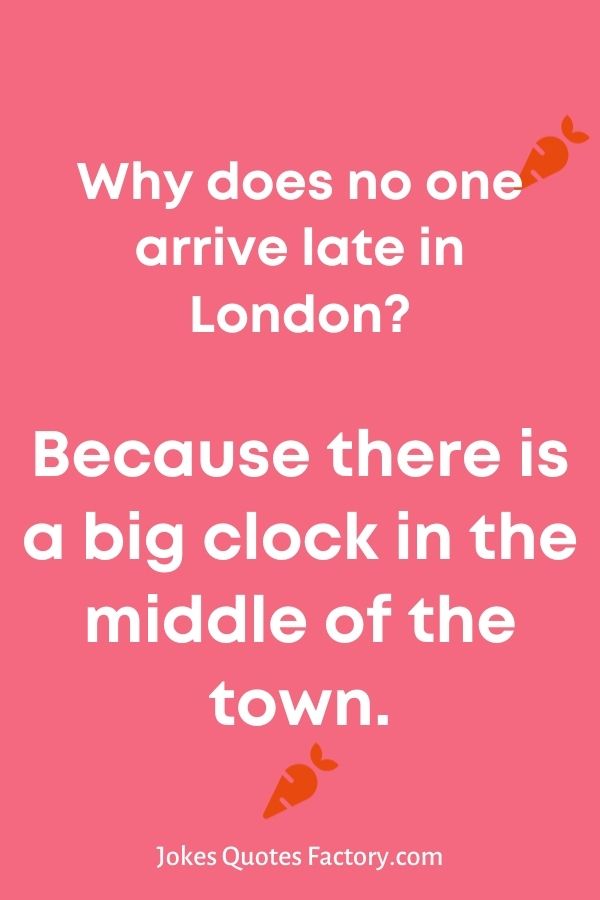 If you see a spaceman while driving your car in central London, what should you do?
Park in it, of course.

Why did Frideric Handel not shop in London?
He had gone Baroque.

What’s the difference between a south London football fan and a plasterer?
One’s a Millwall fan, the other’s a fill-wall man.

The chicken crossed the North Circular Road for what reason?
To get from Finchley to Hendon.

Sherlock Holmes measured the Monopoly board for what reason?
To see if the game was a foot.

Why did the woman have such a horrible time in London?
She had a horrible heir day. 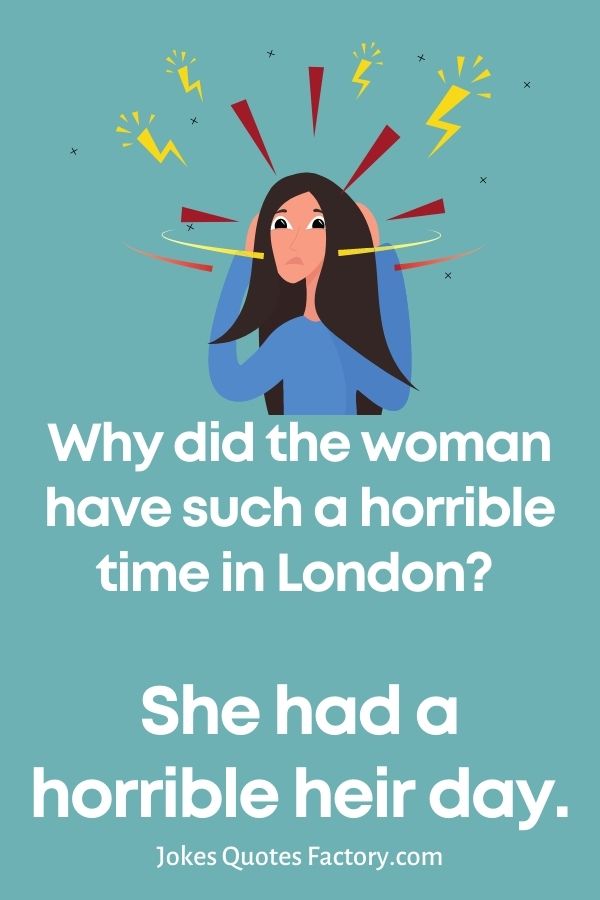 Did any other seminal progressive rock bands form in London in 1968 besides King Crimson?
Yes.

Conjoined twins went to London for what reason?
So the other one could drive a little.

Are you looking for some funny jokes to share with your London friends? We’ve got your back, buddy! We’ve compiled a list of the greatest London one-liners we could uncover.

“I’m from South London”
First of all, you’re from Kent.

A group of friends traveled around England in search of greater theatres in order to recreate the London experience.
They were globe-trotting.

I’m happy to leave the Tower of London with my head intact!

This sweater gave me a nasty rash after I bought it in south-east London.
Woolwich?
It can’t be that. It’s made from polyester.

“Londoners need to be more fearful”
Nah, we’re British, we only panic about a light snow or finding out we’re out of milk. 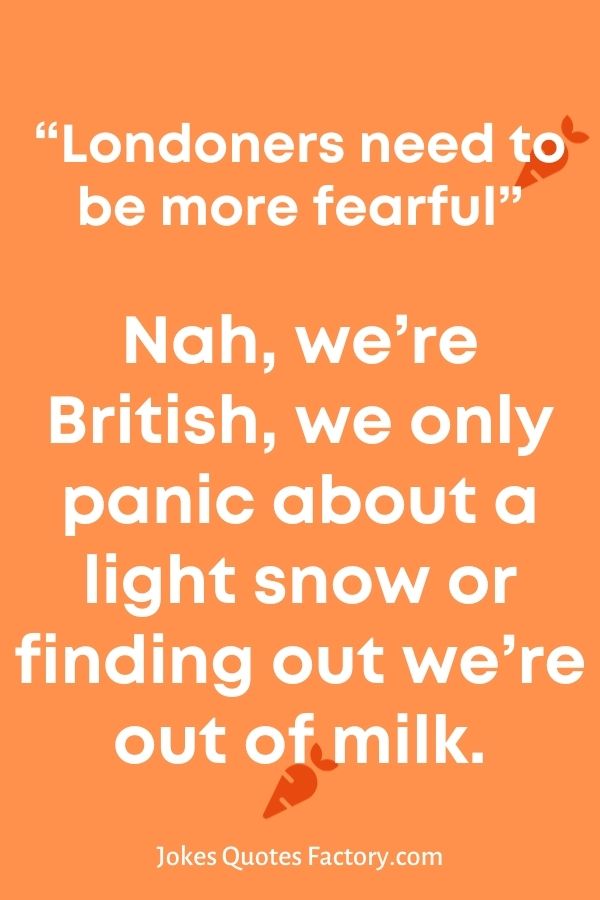 A man enters a London dentist’s office….
“What can I do for you?”

During a visit to London, an American entered a Vietnamese soup restaurant and placed an order directly at the counter.
A line of customers off to the side began groaning and mumbling.
A man at the front pointed to the back of the line and angrily said “Pho Queue!”

These London puns captions for IG can add a distinctive touch to your photos. If you’re looking for caption ideas, check out this collection of funny London captions.

The street art in London is very ad-mural-able.

Talk British to me.

Home is where the palace is. 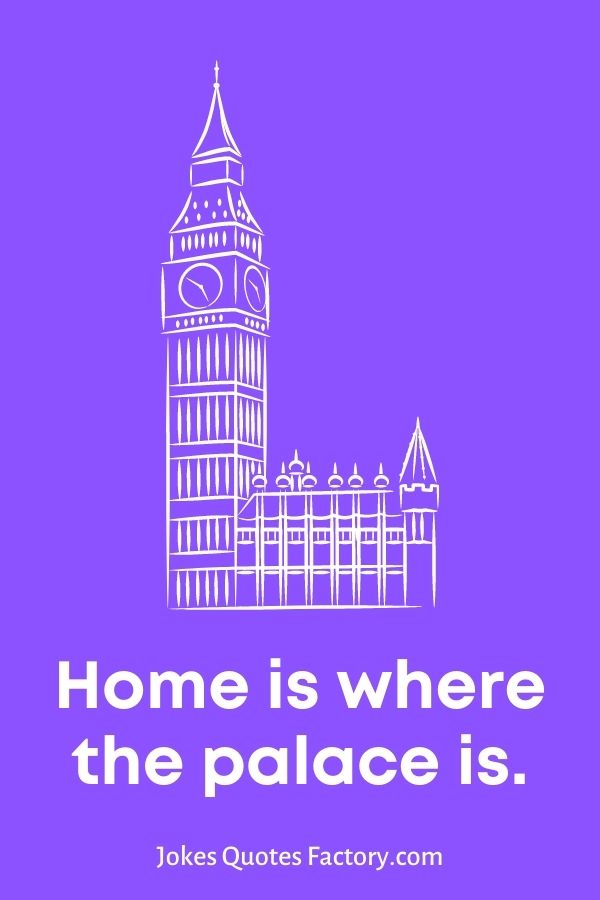 Visiting Buckingham Palace, but I’m having a bad heir day.

Cheaper by the London.

Happy to leave the Tower of London with my head still on!

The curious case of Benjamin London.

Having the best Thames in London!

Let’s cross that Tower Bridge when we get to it.

Here’s the hot tea from London.

Let’s cross that London Bridge when we come to it. 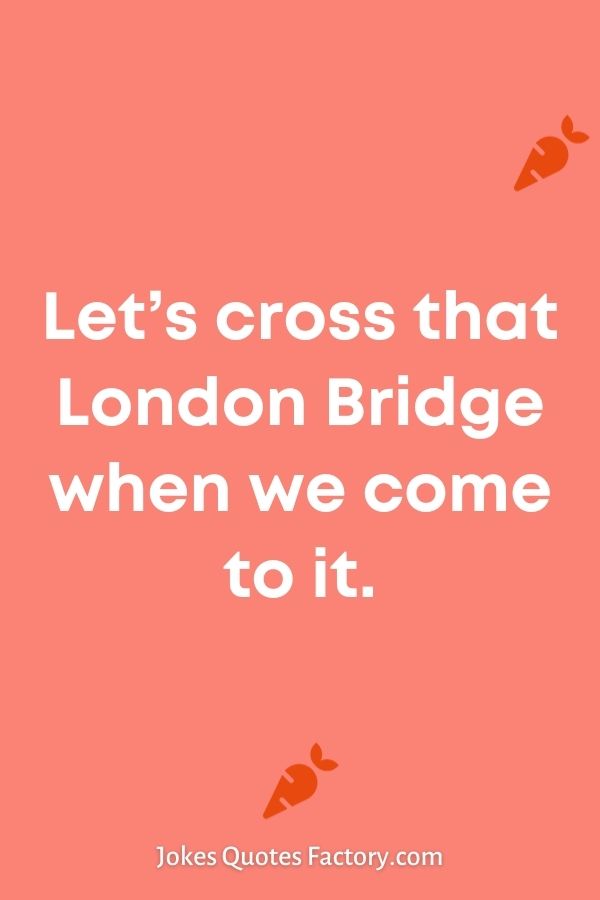 Can you pass the tea and scones, please?

What’s up, MTV. Welcome to my palace.

The traffic in London is like a Piccadilly Circus.

All you need is love and a vacation in London.

From now on, sweet dreams are made of scones and sight-seeing in London.

A bad day in London is still better than a good day anywhere else.

My friend’s bakery burned down in the Great Fire.
Now his business is toast. 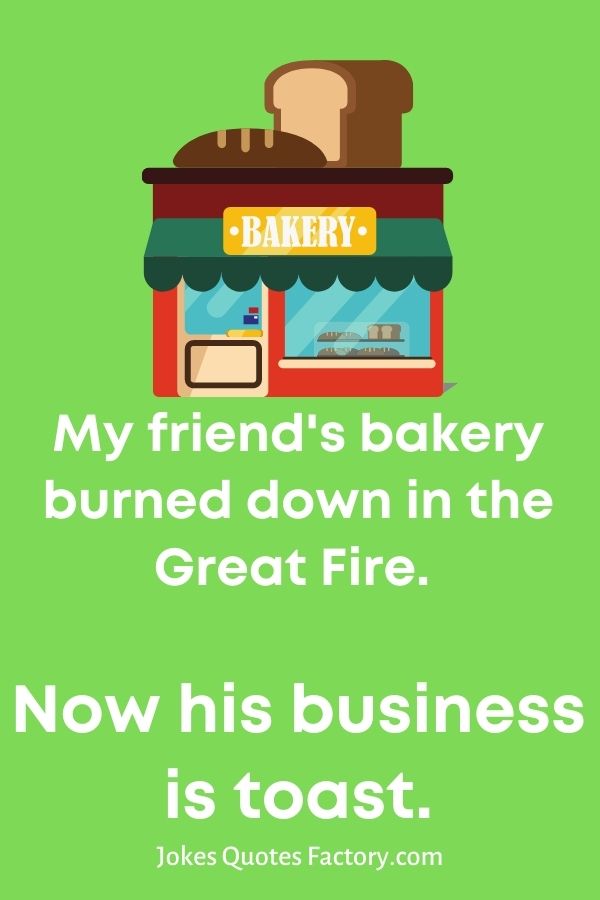 What’s fruity and burns?
The Grape Fire of London.

Due to the design of the tunnels, the London Underground has been known as the Tube since 1890. The number of individuals that ride the subway every day is very impressive! We hope you also get impressed with our London underground jokes.

I taught my pet dog to play the trumpet on the London Underground today,
He went from Barking to Tooting in about 15 minutes.

A tourist on the London Underground asked me how to get to Heathrow via Barking.
So I pointed at a map and woofed…

You don’t joke about the London Underground at 8 am.
Full stop. 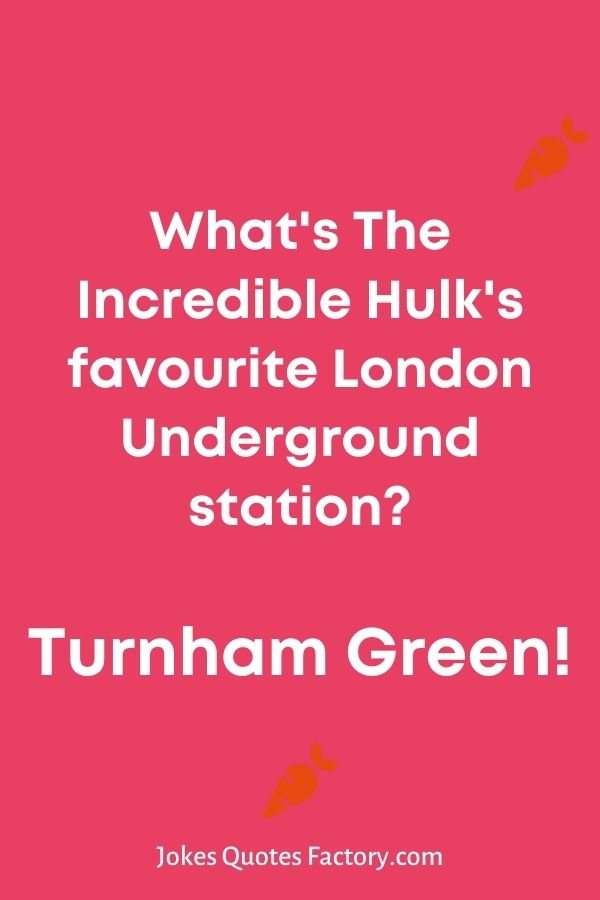 What do you call a Wookie war-cry on the London Underground?
Tube-haka

“These puns are amazing.
Put your hands together and Clapham North and south of the river”

There are strict rules about how to behave on the London tube, and when people don’t respect them it can get pretty funny.

I heard the Big Ben is getting renovated.
The engineers are working around the clock.

For those unaware, Big Ben is undergoing renovations in London; it’s no easy task
They’re having to work around the clock to make it happen.

What do Big Ben and my ex have in common?
They both won’t stop ringing.

My uncle is a bus driver that circles Big Ben in London …
He works around the clock.

The repairs on big ben are expected to take 3 years.
That’s a long time considering they’re working around the clock.

People think Big Ben is a cool tourist attraction.
In America we have thousands of Big Ben’s, most of the time we can’t get around them in a store aisle but it’s still not exactly something you take a selfie in front of.

Get ready for a trip with these amusing England puns.  Here are some of my favourite England puns to make your vacation even better!

“An Englishman, even if he is alone, forms an orderly queue of one.”

‘The English are not happy unless they are miserable.’

“Being an England supporter is like being the over-optimistic parents of the fat kid on sports day.”

“The readiness of the English to apologise for something they haven’t done is remarkable.”

We have really everything in common with America nowadays except, of course, language.

My father is a bus driver that circles Big Ben in London.
He works around the clock.

A woman just fainted whilst riding The London Eye.
She’s slowly coming round.

I bought some new “London Bridge Jeans.”
They keep falling down.

Brits prefer brooms over vacuum cleaners when it comes to cleaning their floors.

A woman in England gives birth every 30 seconds.
She must be exhausted.

An English man was left in a vegetative state after being hit by a car, bus, tractor and trailer.

Are you still in need of few smart puns to use as London captions for Instagram while you’re there? Read through what we have put together just for you!

“Keep calm and go to London.” 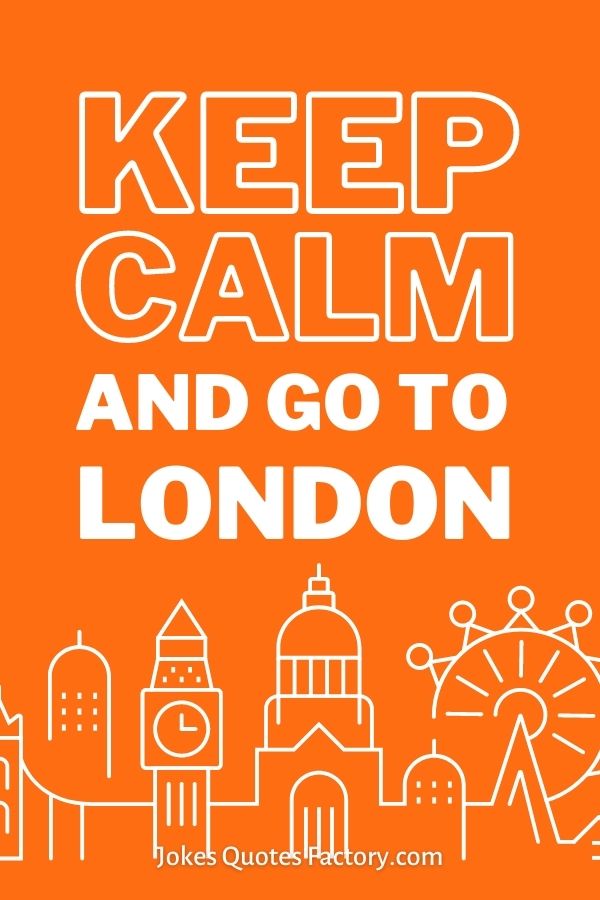 “London is always a good idea.”

“London is calling, so I must go.”

“The parks be the lungs of London.”

“I wish London wasn’t so far away.”

“I like the spirit of this great London, which I feel all around me.”

“In London, everyone is different, and that means everyone can fit in.”

“To walk alone in London is the greatest rest.”

“By seeing London, I have seen as much of life as the world can show.” 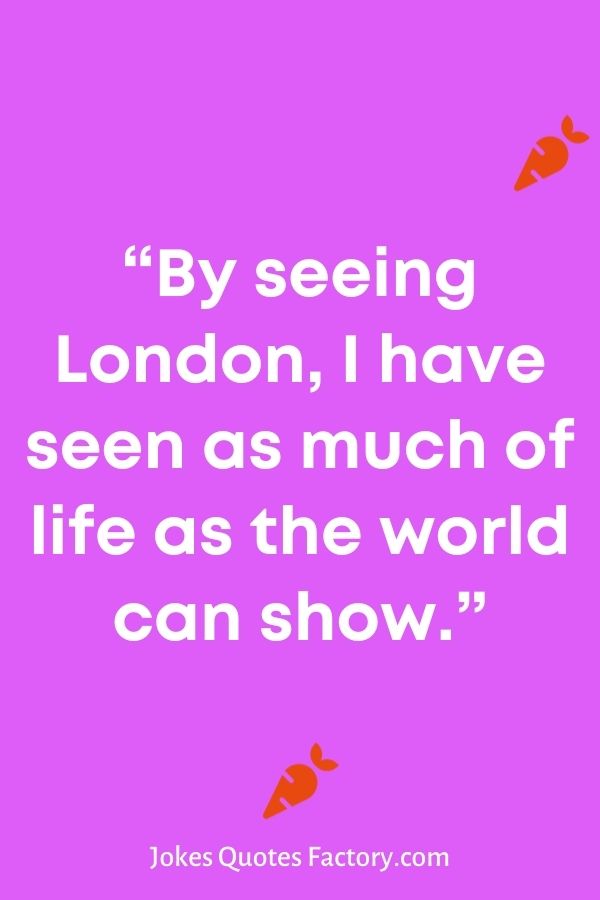 “Money can’t buy you happiness, but it can buy you a ticket to London.”

“All you need is love and a vacation in London.

“A bad day in London is better than a good day anywhere else.”

“I travel continuously, and I see many cities, but there is nowhere like London.”

“London is sexy because it’s full of eccentrics.”

“If you’re curious, London is an amazing place.”

“New York has a great energy, but London is better.” 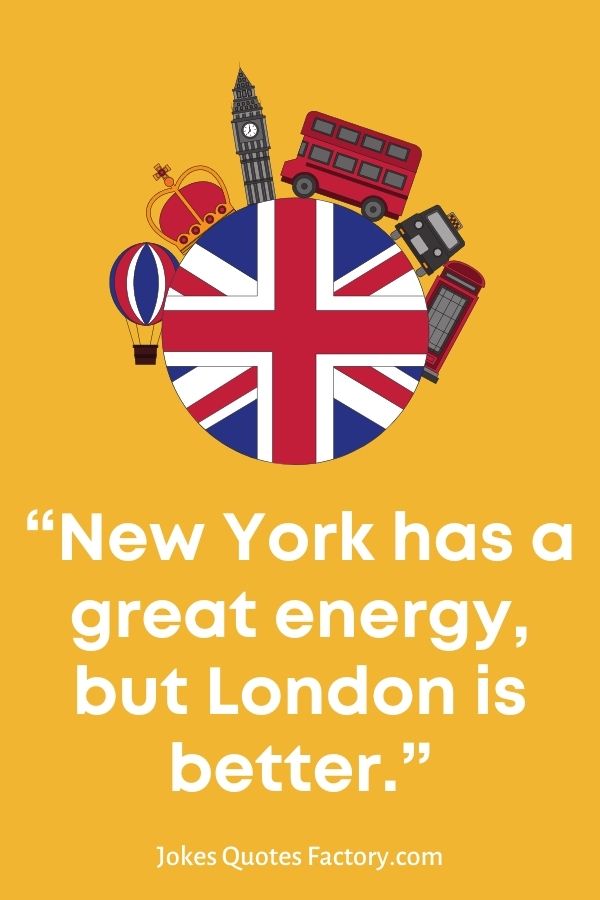 “I like the spirit of this great London which I feel around me.”

“In London, everyone is different, and that means anyone can fit in.”

“I’ve been walking about London for the last 30 years, and I find something fresh in it every day.”

“I went to London because, for me, it was the home of literature. I went there because of Dickens and Shakespeare.”

“Nothing in London is certain but expense.”

“In London, love and scandal are considered the best sweeteners of tea.”

“Always there have been six ravens at the Tower. If the ravens fly away, the kingdom will fall.” ― John Owen Theobald, These Dark Wings

It is 443 feet tall and is the world’s highest cantilevered observation wheel, making it the tallest in the world. It is made up of 32 capsules, which symbolise the 32 boroughs of London. It has the capacity to transport 800 passengers in a single spin. London Eye can give you the experience of a lifetime! Don’t forget to share our London Eye Instagram captions.

I have no real training in the history of fine art or furniture; my eye just works by proportions. I react intuitively. In London, it’s all about color because the weather is so gray, and in that cold light they look beautiful. – Mario Testino

I was always a show girl. My parents were wonderful. There wasn’t a lot going on where we lived, but they ferried me to classes and competitions all over the place. When I was 12, I came to London as a finalist in a singing competition and I was completely wide-eyed. – Anna Maxwell Martin

I’ve been lucky enough to work with a make-up artist, Joel Harlow, who you can throw anything at. I said, “Joel, I need to go to the London eye with my children and I want to look like a roadie from Lynyrd Skynyrd.” – Johnny Depp

I like to revamp things; like, I make to make things better in my eye, but I don’t put out own lines… I just collab with my favorite brands. – Theophilus London 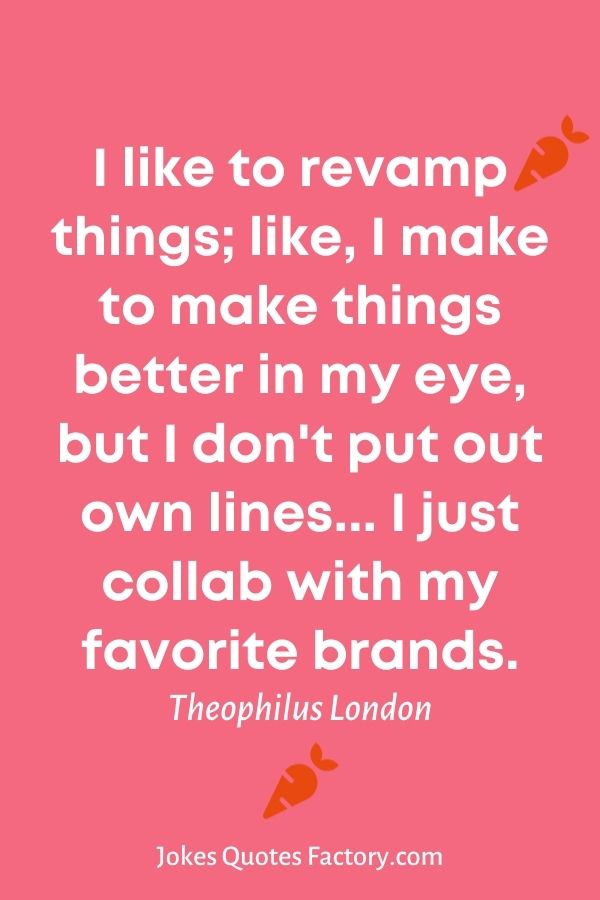 If you are planning a trip to London, don’t forget to pack these hilarious London jokes with you. We hope you enjoyed every bit of it! If you are looking for more jokes, we have a lot more for you.