Women have certain qualities (or at least tell their boyfriends they have certain qualities) that are irresistible to men. That’s why they go out with them in the first place. Women are funny and make jokes just as good as men do. Here are some funny and dirty joke compilations for all of you ladies. You might want to read them when your man is not around.

We’ve all heard some good jokes about women, but these top-rated jokes are guaranteed to get a laugh out of your friends and family. Some may even spark a little debate about the female gender, but with so many different ways to interpret the jokes, it’s hard to know what’s meant.

Are you looking for a collection of funny, dirty, and flirty women jokes? If so, this is the place. We’ve had a lot of fun compiling these and hope you enjoy reading them as much as we did.

A woman marries a man expecting he will change, but he doesn’t
A man marries a woman hoping she won’t change, and she does.

Big or small, young or old, I think most men will agree
Women are scary. 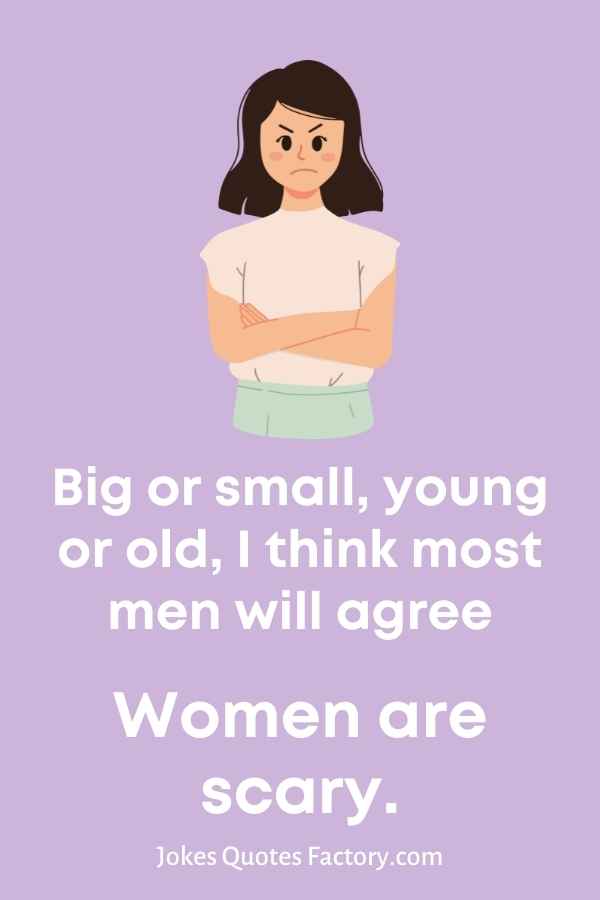 When can a woman make you a millionaire?
When you’re a billionaire!

When a woman says, “what?” It’s not because she didn’t hear you
She’s just giving you a chance to change what you said 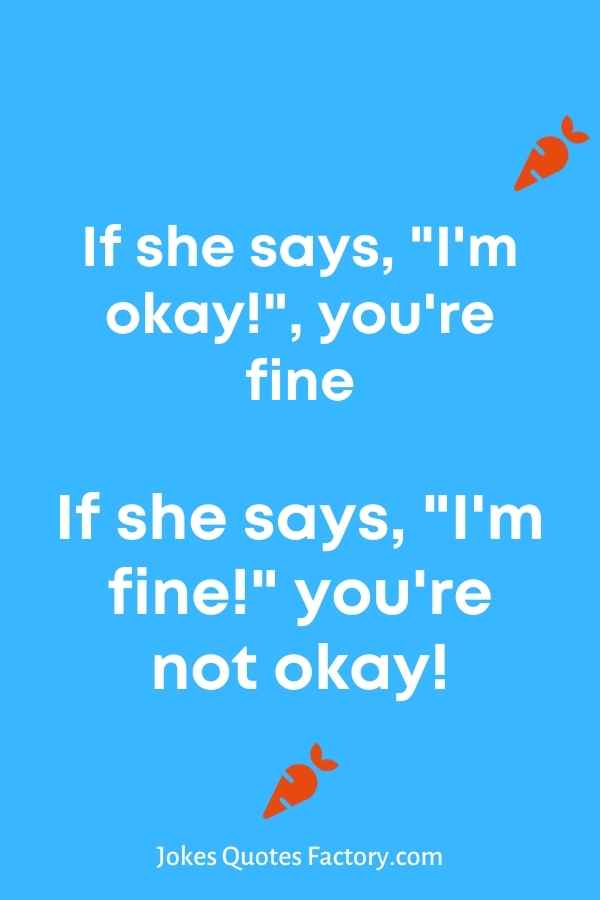 When a girl says, “Okay, have fun!”
Do not have fun. Abort mission. I repeat, abort the mission

There are two theories about arguing with women
Neither one works 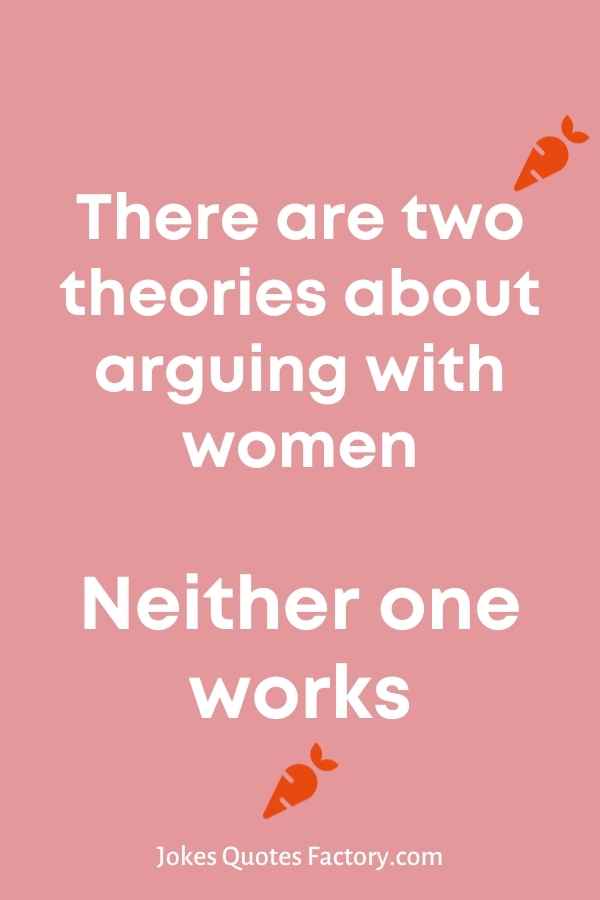 If women ruled the world, there would be no wars
Just a bunch of countries not talking to each other

How is a woman like a road?
Both have manholes.

What do you call a woman who can’t make sandwiches?
Single.

What do you call a married woman vacuuming?
Doing what he’s told…

What are the small bumps around a woman’s nipples for?
It’s Braille for “suck here.” 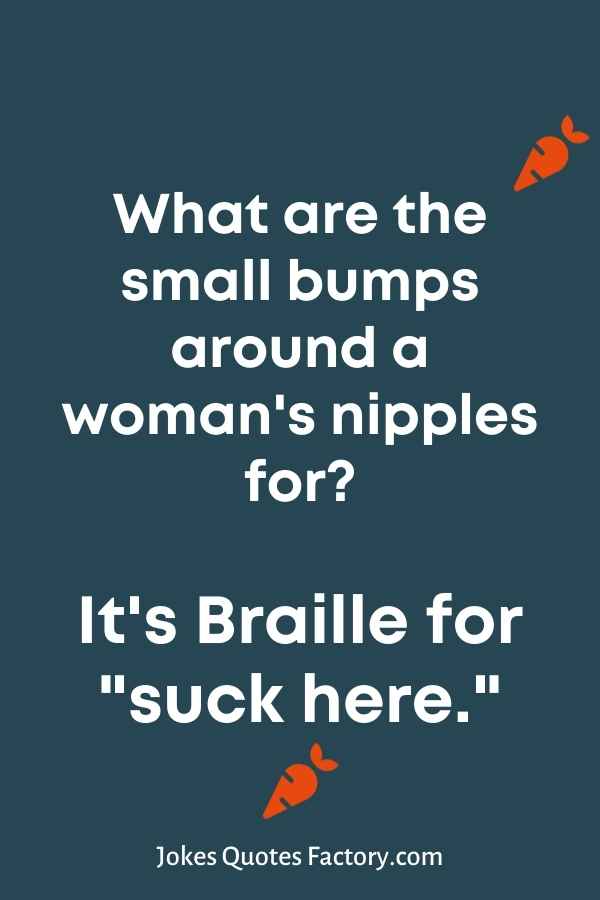 What’s the difference between your bonus and your dick?
You don’t have to beg a woman to blow your bonus.

What do you call a woman who loves small dicks?
Hopefully, your girlfriend. 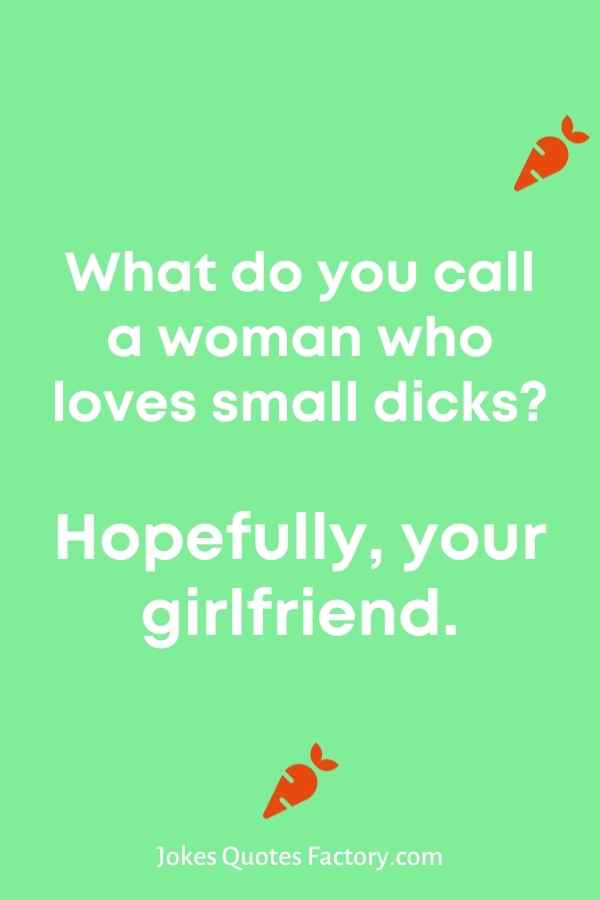 What’s the difference between a woman and a refrigerator?
A refrigerator is easier to defrost.

What’s the difference between a woman and a refrigerator?
A refrigerator doesn’t moan when you put meat in it.

What do you call a woman that has lost 95% of her intelligence?
Divorced.

What is love?
The delusion that one woman differs from another.

What is a woman spelled backward?
Kitchen. 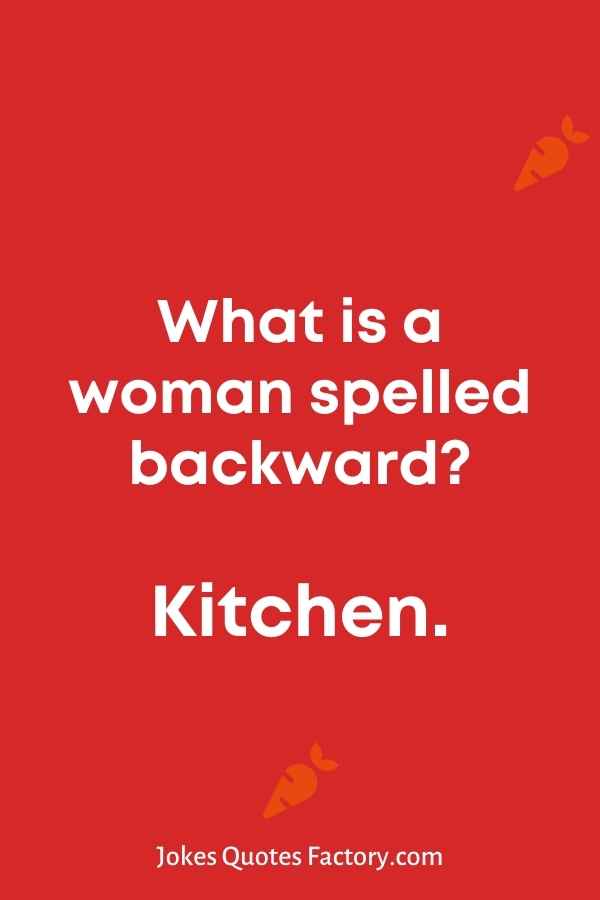 What do you call a woman covered in tattoos?
Muriel.

What do you give a woman with everything?
Penicillin.

How do you blind a woman?
You put a windshield in front of her.

What is loud and obnoxious?
A woman. 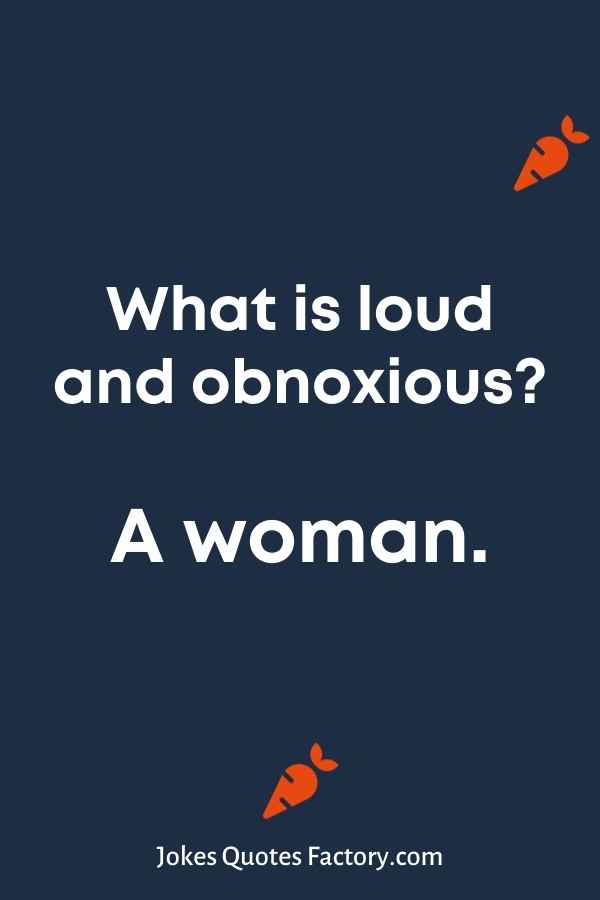 What do you call a woman without an asshole?
SINGLE!

So you’re looking for a collection of Wonder Woman jokes? Well, we’ve got you covered. Let’s start with an introduction to comics and TV shows first.

What is the best part of a Wonder Woman joke?
The PUNCH line. 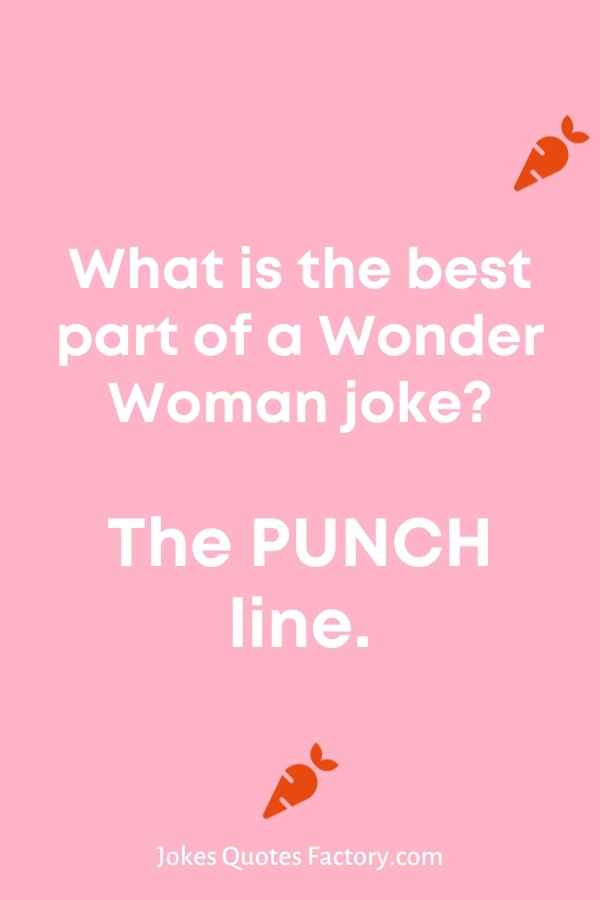 What does Wonder Woman put in her lemonade?
Just ice.

Why did Wolverine bring Wonder Woman with him to the used car dealer?
So she could use her Lasso of Truth on the salesman.

Why did all the pictures come dark from Wonder Woman’s holiday party?
She forgot to invite the Flash.

How did Wonder Woman fix the broken vase?
A lot of Super Glue 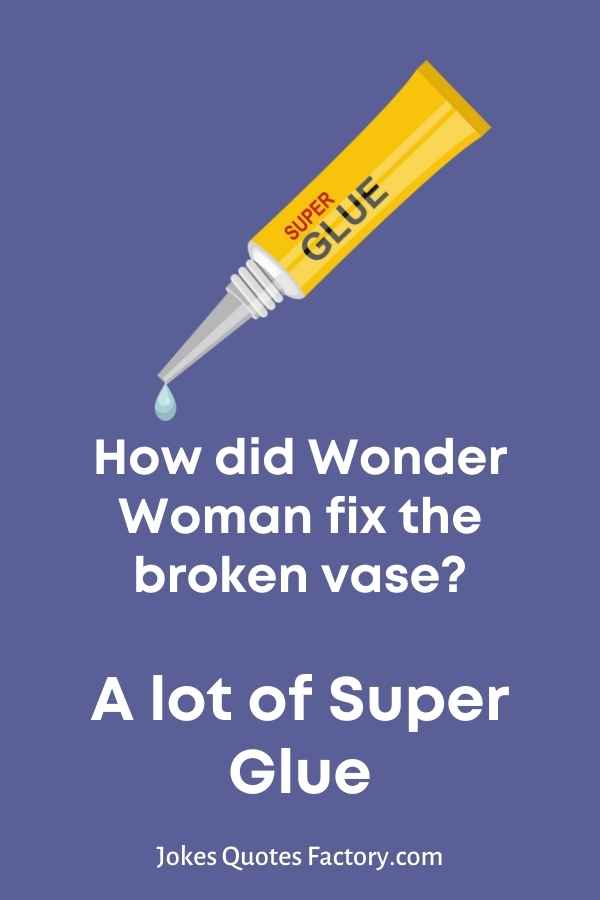 What does Wonder Woman do before bedtime?
She puts her pajamazon

Which superhero is the most curious?
Wonder Woman

Why was the boy worried when he told his teacher that a dog had eaten his homework?
His teacher was Wonder Woman – and she has a lasso of truth!

Which superhero gets lost often when walking around?
Wander Woman.

Why was Wonder Woman late to the Justice League meeting?
She couldn’t find her jet – it was invisible! 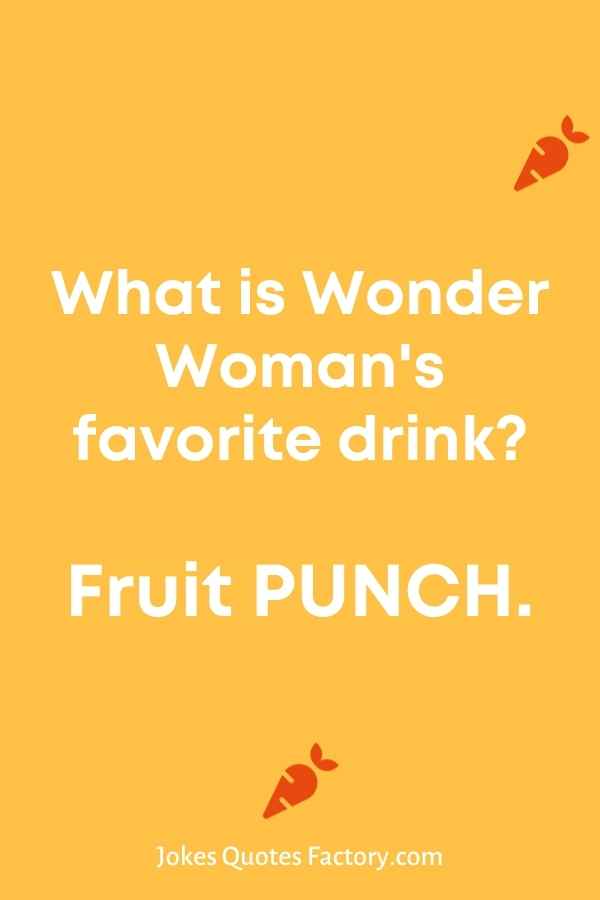 What did Wonder Woman say to Spider-Man?
You bug me.

Where does Wonder Woman do most of her shopping?
Amazon.

Why did Wonder Woman go to the beauty salon?
She ran out of Themyscira.

Why does Wonder Woman get asked out to dinner but not lunch or breakfast?
Because she’s a Superhero.

Why did Wonder Woman have to keep getting new airplanes?
She kept forgetting where she parked her old one (her plane is invisible).

What does Diana Prince, the Princess of Themyscira, use to make sandwiches?
Wonder Bread 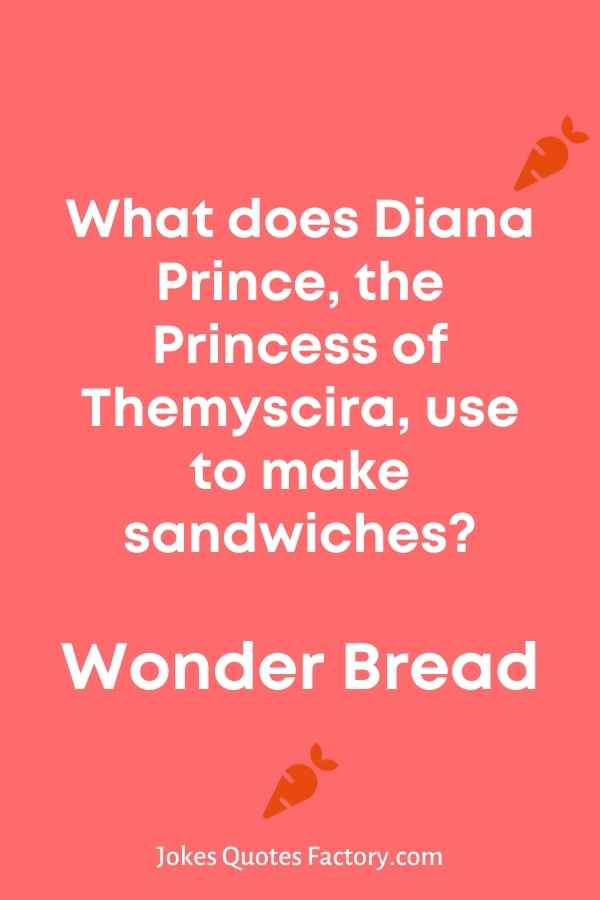 What would you get if you cross Wonder Woman with a Transformer?
Amazon Prime.

What is Wonder Woman’s favorite children’s book?
Alice in Wonderland.

Which superhero can you only see from a distance?
Yonder Woman.

Knock knock.
Who’s there?
One.
One who?
Wonder Woman, that’s who! 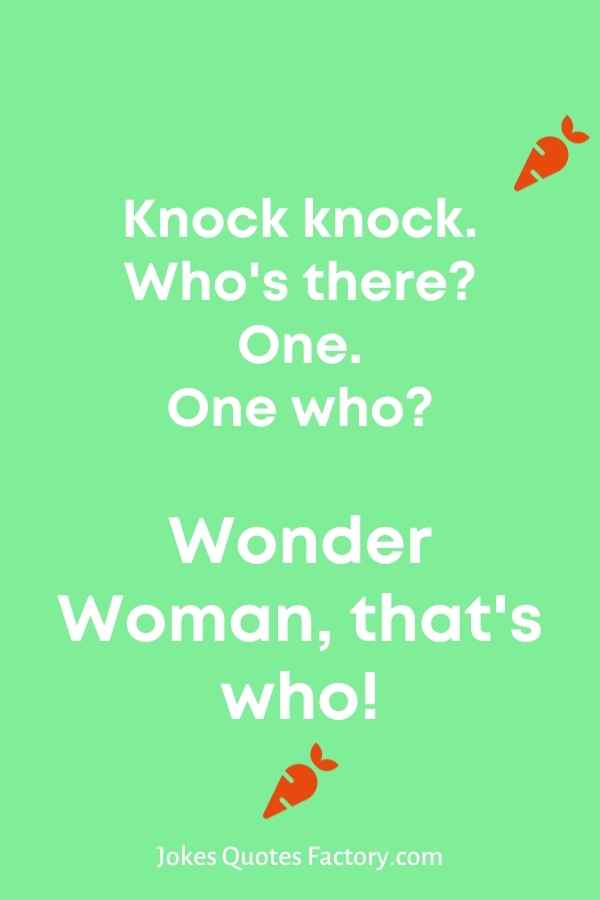 Look no further if you’re looking for a collection of funny and dirty flirty woman jokes. First, we have a few that may cause your jaw to drop. Then there are many more for the rest of you.

Why did God create orgasms?
So women can moan even when they’re happy. 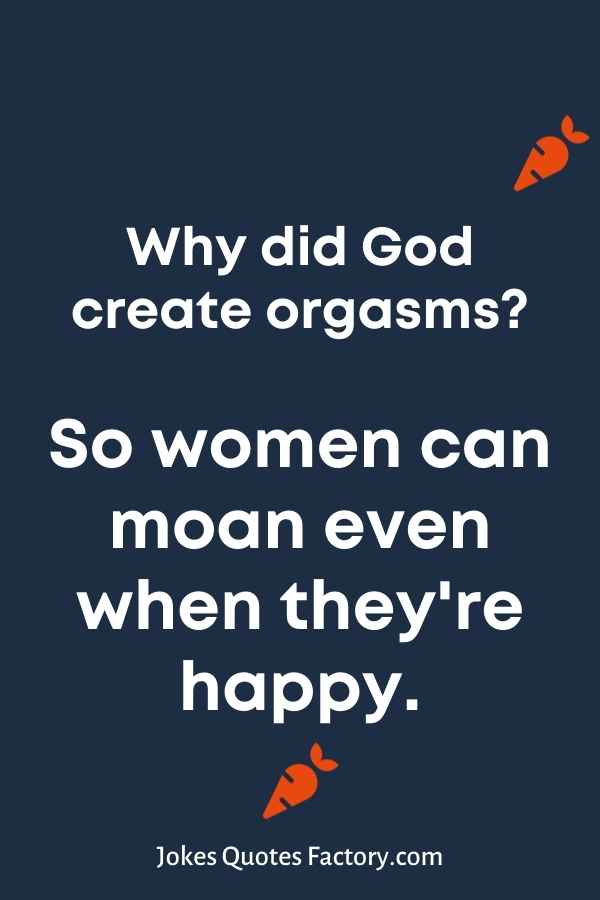 How do you know when it’s time to get a new dishwasher?
When the old one expects you to “do your share”

Why did God make women?
Do you think he’s going to wash the dishes?

Why are women like clouds?
Eventually, they go away, and it’s a nice day.

Why is life like a penis?
Women make it hard! 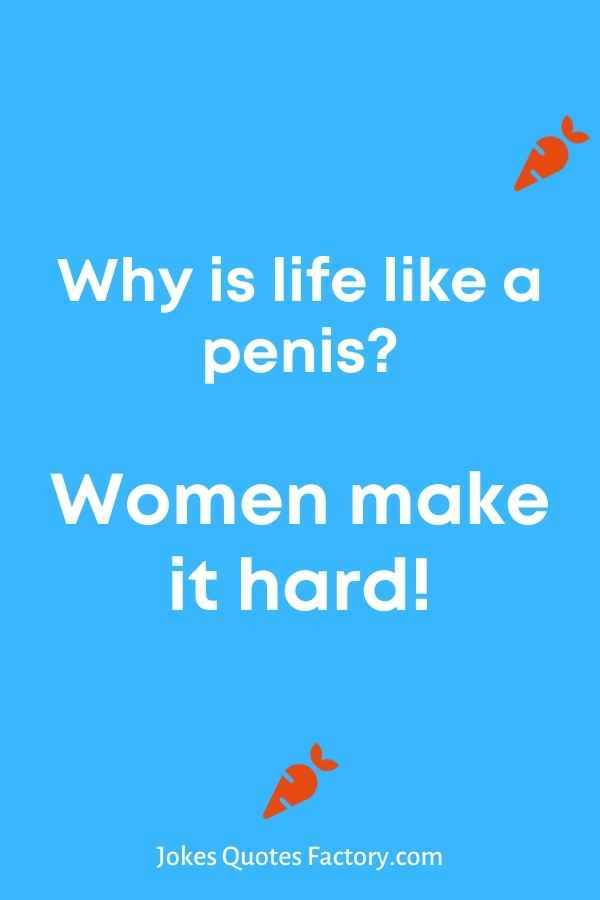 Why do women have periods?
Because they deserve them.

A quiet man is a thinking man.
A quiet woman is usually mad.

What did one female firefly say to the other?
You glow, girl!

Why are men sexier than women?
You can’t spell sexy without XY.

What book do women like the most?
“Their husband’s checkbook!”

What do girls and noodles have in common?
They both wiggle when you eat them.

How much money do you need to satisfy a woman?
It is always just a little bit more.

What have women and condoms got in common?
If they’re not on your dick, they’re in your wallet.

What do you call a letter from a feminist?
Hate male. 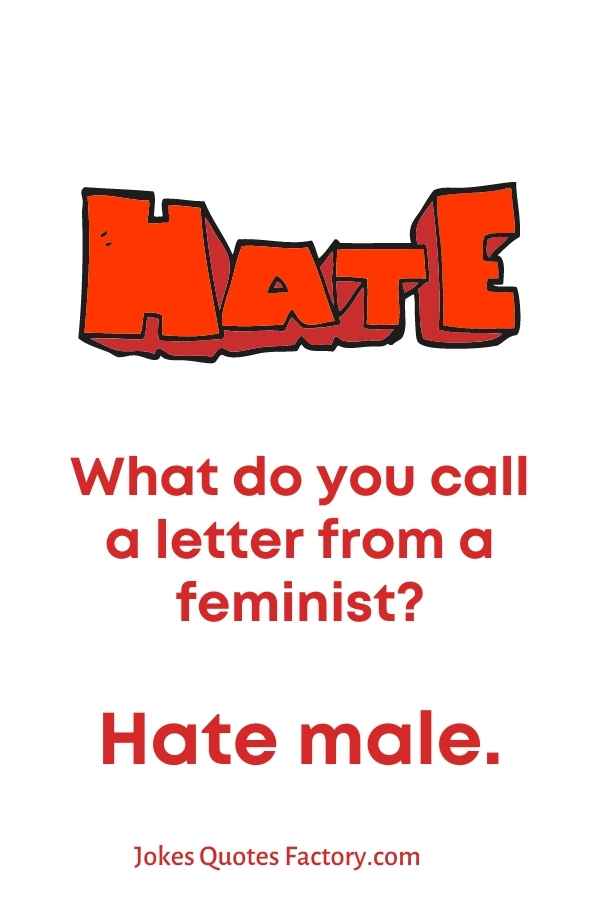 What is the definition of eternity?
The time that elapses from when you come till she goes.

What do you call a woman who always knows where her husband is?
The widow.

If you’re a woman, the odds are that you’ve heard some pretty creative and humorous jokes about your gender before. And if you’re not, here’s a good way to get a glimpse of what you’ve been missing. In addition to the one-liners in this article, be sure to check out our article on funny dirty jokes too. They’re worth a read.