Tokyo is a lovely city in Asia, and it is home to many famous people. Tokyo is the capital and the largest city of Japan, which is a fascinating nation in its own right.  There are a plethora of fascinating sites to discover. Our Tokyo jokes will definitely be handy!

It is one of the most interesting cities in the world. It’s humbling to realise just how much there is to take in, experience, and discover here. Although Tokyo is cordial to Westerners, it is also a city full of unexpected surprises. You’ll be taken aback by its natural splendour, its people, and its eccentricities. It’s a must-see.

For now, you better enjoy these Japanese jokes.

What not to love in Japan? These jokes about Japan will make you fall in love with the city all over again! You gotta check this out.

What is the weather like in Tokyo today?
Crowdy. 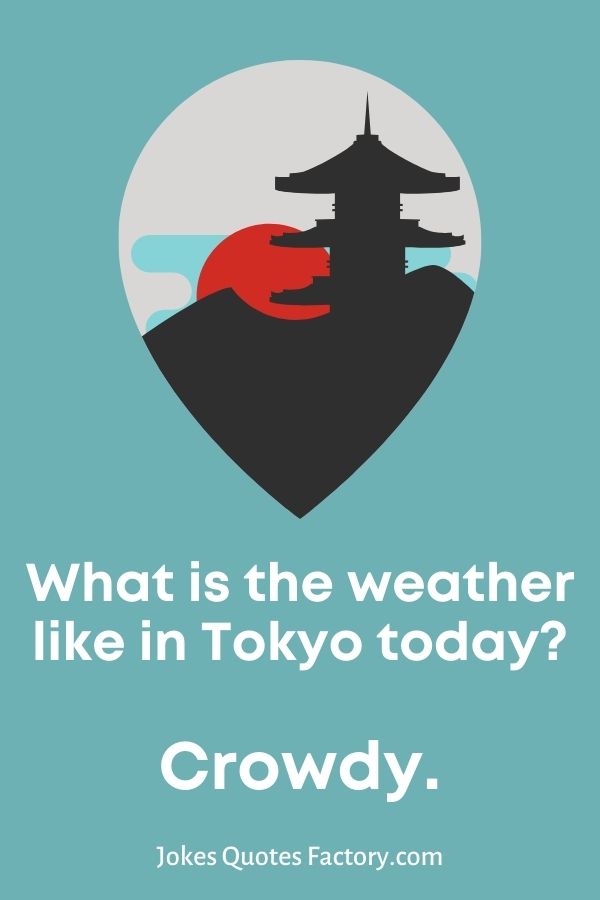 In Tokyo, what do they eat for breakfast?
Japancakes.

In Tokyo, what did the cannibals eat?
Rawmen.

The National Origami Museum in Tokyo has been vandalized.
We’ll keep you updated as the story unfolds.

In the last few months, my coffee shop in Tokyo hasn’t had many customers.
It’s ok now though, people are starting to drift in.

Did you hear that Eminem was opening a noodle restaurant in Tokyo?
He is very good at ramen.

Did you see the 75th annual ninja parade in downtown Tokyo?
Neither did anyone else.

I have decided to write all of my jokes in capital from now on…
This one was written in Tokyo. 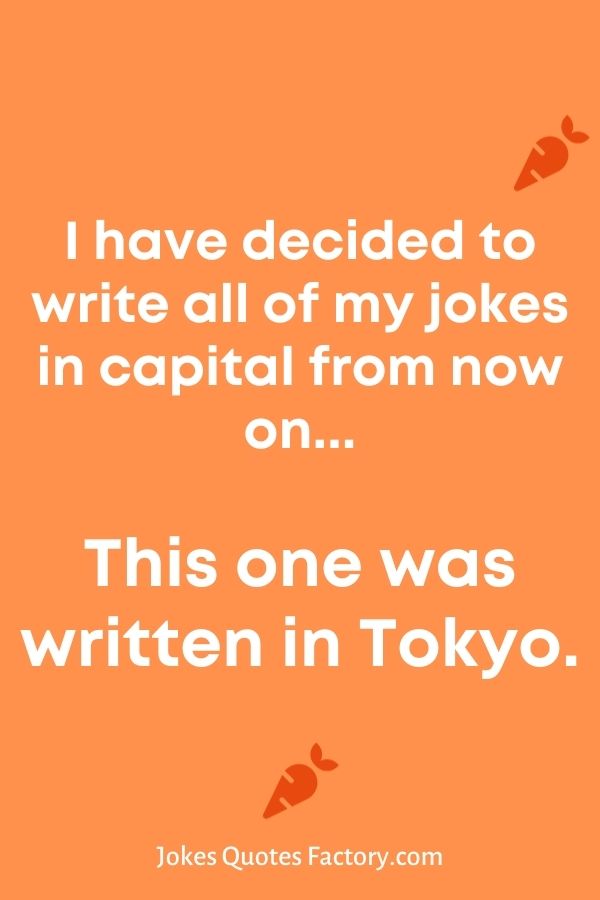 My coffee shop in Tokyo hasn’t had many customers in the last couple of months…
It’s ok now though, people are starting to drift in.

A new casino opened recently in Tokyo.
It is called “Pokermon Go”.

As part of the next Fast and Furious movie, they will go undercover as rideshare drivers in Asia.
It’s called Tokyo Lyft.

Are you looking for funny Japanese jokes? These jokes about Japanese are just what you need if you are missing Tokyo, Japan.

When the Japanese forced all their best drivers to be in Fast and the Furious, what was it called?
Tokyo Draft. 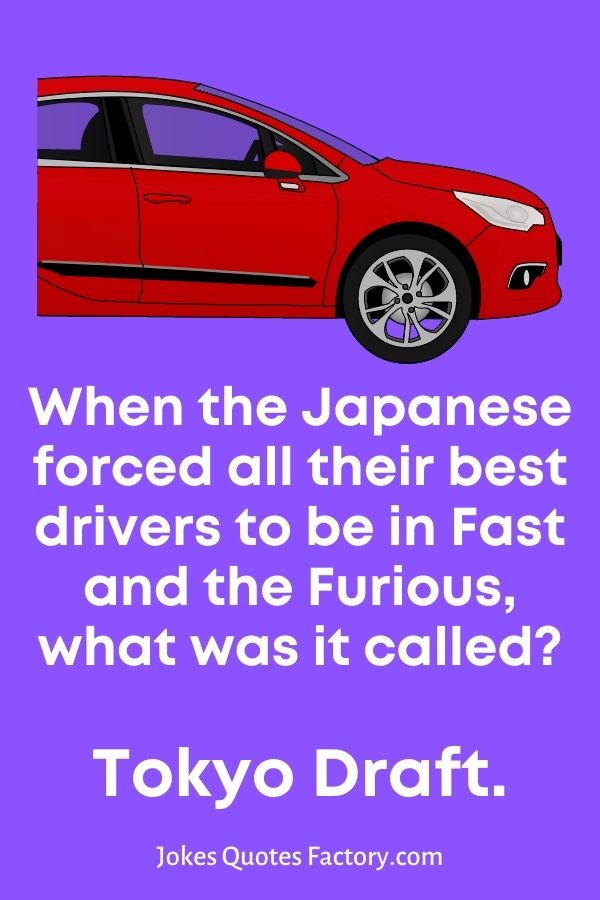 A Japanese bakery thief says what?
“I Tokyo cookie.”

Why’s it so hard to break up with a Japanese girl?
You gotta drop the bomb twice.

How do you get a Japanese fanclub?
Walk around with a bundle of gas masks!

How would you describe a homeless Japanese man?
Tokyo Drifter.

What is the purpose of shaving the legs of Japanese sumo wrestlers?
So you can tell them apart from the feminists.

You probably know Naruto, Pokemon, Sailor Moon, Dragon Ball, and One Piece. They are popular animes from Japan. Read through these anime and manga jokes that we have collected here for your enjoyment.

How do you get reluctant Pokemon to get on a bus?
You Poke-em-on. 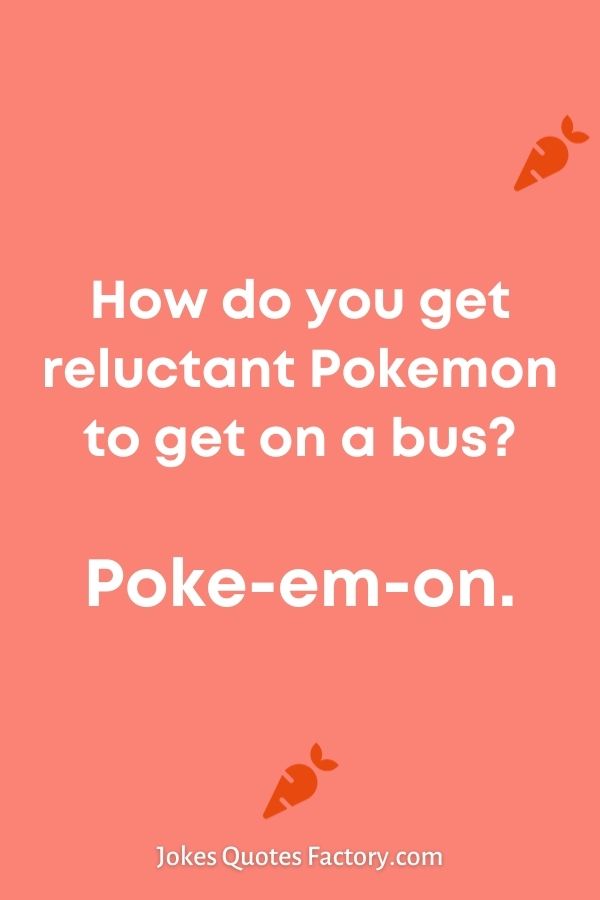 What is the favorite type of nose Saitama?
Genos.

What did Meowth say to Ash when he told him to pretend like a tree and leave?
He asked if Professor Oak was the one who set him up for that.

What character do you get when you cross a Sailor with a Cow?
Sailor Moo.

What is common between Light from ‘Death Note’ and a lift?
They are both L-evaders.

Why did Saitama get fired from his job when working on the railways as a conductor?
Because he had to punch a ticket.

How did Brock keep himself dry during the rain?
He used his frying pans as drying pans.

What anime do you get when you mix melon and a collie?
‘The Melon-collie of Haruhi Suzumiya.’

What does MonkeyD Luffy says when do you want another piece of the pie?
You can only have ‘One Piece.’

What is a Whailord Pokemon’s favorite TV show?
‘Whale of Fortune.’ 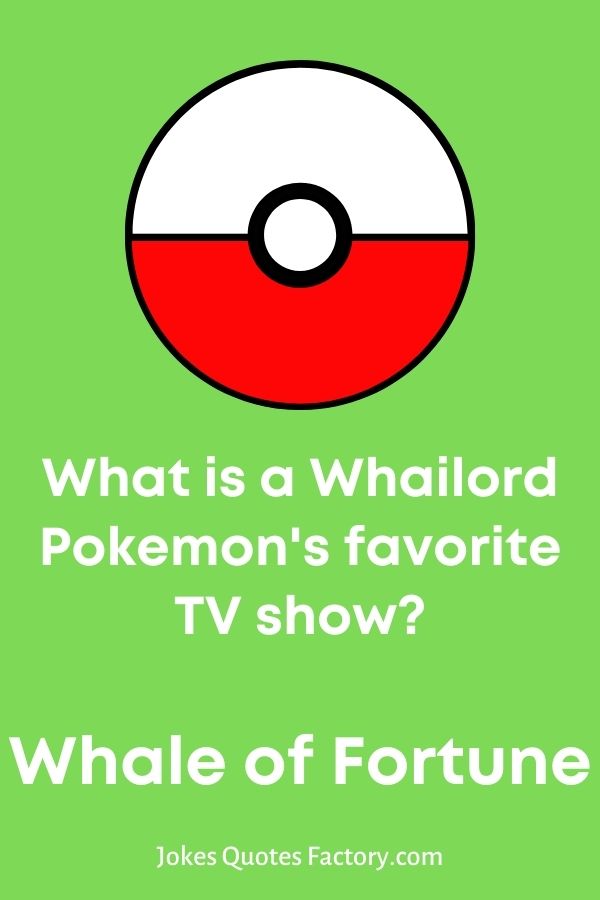 What is a ghoul’s favorite drink from ‘Tokyo Ghoul’?
A Ghoul-Aid.

What is a Pokemon addict’s favorite place to visit in France?
Paras.

Why you would be in deep trouble if ‘Tokyo Ghoul’ would have been real?
Because, in this world, you Ken-run, but you Ken-not hide.

Why does nobody joke about rock-type or ground-type Pokemon?
Because their jokes have reached rock bottom.

Why does Miso not like the world anymore?
Because there is no Light.

Well, every sports fan is excited about Olympics. It really gives us goosebumps when the summer Olympics opening ceremony starts – our favorite is the parade of nations!

It was announced yesterday that the 2020 Summer Olympics in Tokyo will make all of its medals from recycled cellphones.
Well, they’re going to make the Olympic torch out of a Samsung Galaxy.

What do Olympic runners eat before running?
Nothing cause they fast. 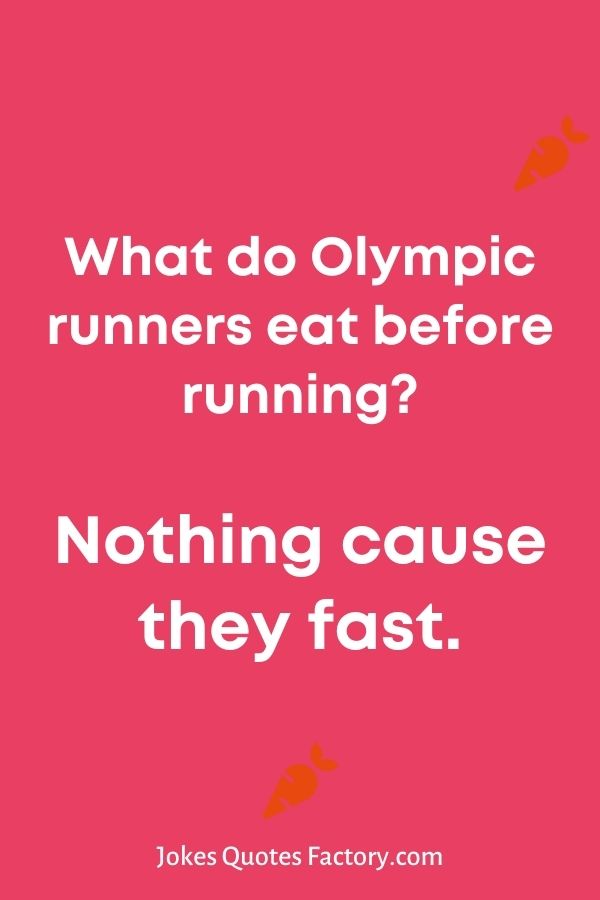 If laziness was an Olympic sport,
I would’ve placed 4th so I wouldn’t have to climb the winners’ stairs.

Did you hear about the Olympic fencer who would only counter-attack?
He knew ripostes were the best way to get Gold.

It didn’t work out for my tryout with the Tokyo Olympics diving team.
But I made quite a splash with the judges.

My tryout for the Tokyo Olympic diving team was a flop.
But I made quite a splash with the judges.

Lynn’s nurse at the vaccination center recently qualified for a sport in the Tokyo Olympics. What sport is it?
Javelin.

Where do Olympic Gymnasts Go to Drink?
Uneven bars. 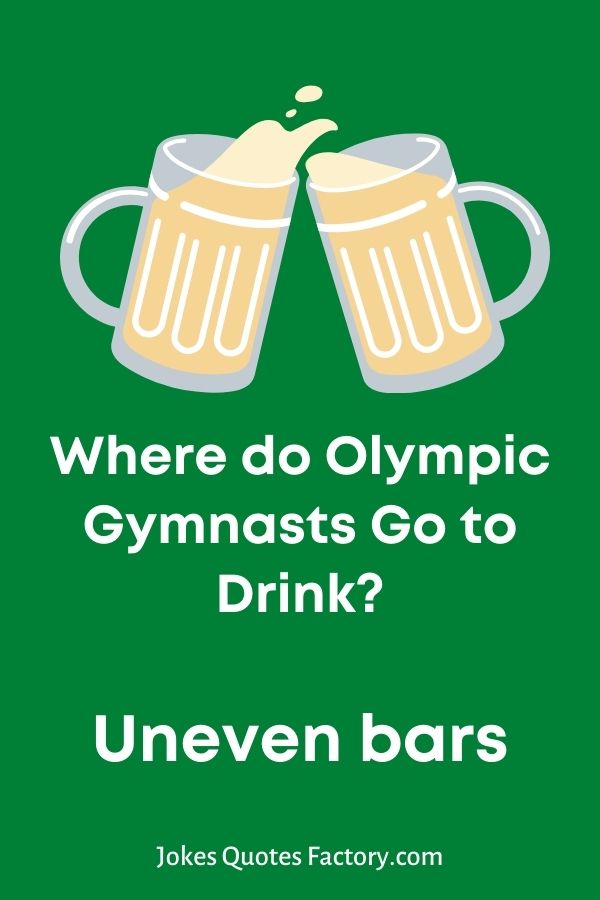 People adore Tokyo because it offers both urban and nature experiences. Their wonderful food is also a big hit. The Imperial Palace, shopping in Akihabara, a cherry-blossom festival, and a bright Ferris wheel are dream destinations. We hope you enjoyed these hilarious japan jokes. Share with friends and have a good laugh.

You might also want to check out other jokes that we have for you.