Potatoes are rich in fiber and antioxidants, which are good nutrients for our bodies to function well. Whether mashed or fried, it can be a good ingredient for children and adults alike. In this regard, it can also be a good source of entertainment when you fabricate hilarious jokes out of it.

Let’s all enjoy this once-in-a-lifetime event of navigating this new collection of potato jokes tailor-made for young ones and young ones. All ages will surely tickle their funny bones as they engage in these original potato jokes.

Start your day with a good joke, and it will make your day more exciting and full of adventure. Perhaps check out these funny potato jokes, and don’t forget to share them with your loved ones. Have a great time!

How do you describe potatoes with right angles?
Square roots. 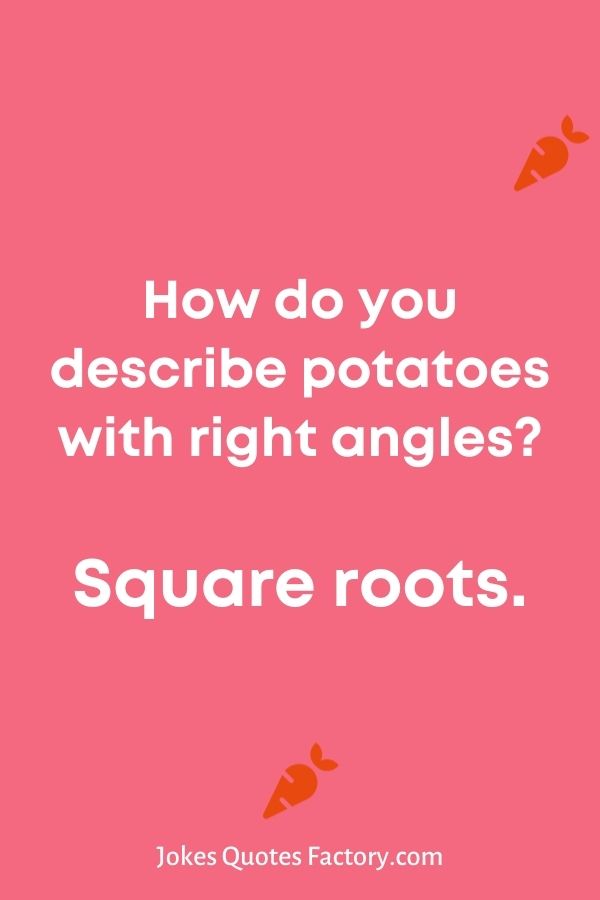 What caused the potato salad to blush?
Because it saw the salad dressing.

What made the potato go to a psychiatric hospital?
It was starch raving mad.

Can you tell me what a stolen yam is called?
Hot Potato.

What do you call a lazy potato?
Couch Potato.

Which song does a potato-like dance to at a Halloween party?
The ‘Monster Mash’.

Which potato is the most powerful?
Darth Tater.

Does a potato have a favorite author?
Edgar Allen Poe-tato.

What do you call a first aid vehicle made from potatoes?
Yambulance. 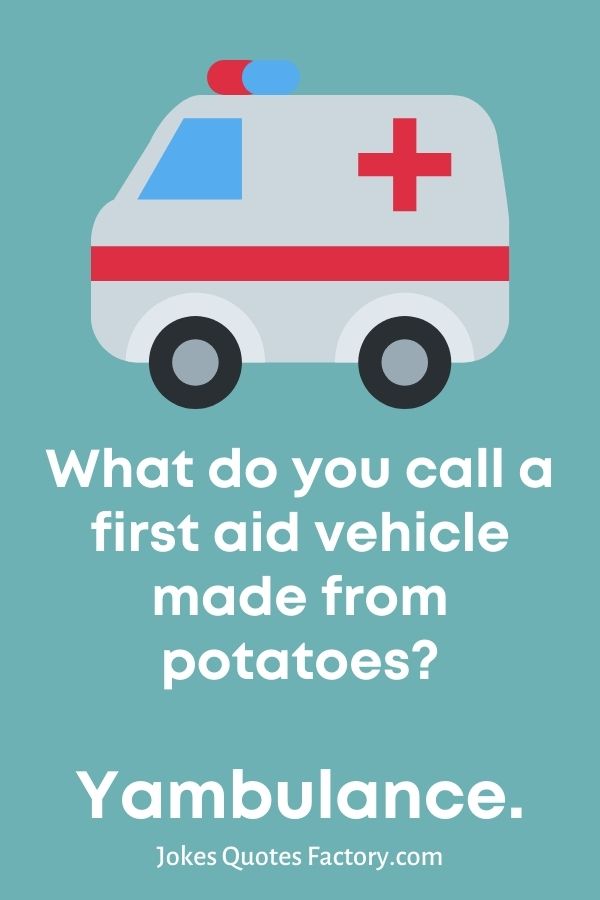 The life philosophy of a potato?
I think, therefore I yam.

How did the burger propose to the fry?
With an onion ring.

Do you know what you call a lethargic baby kangaroo?
A pouch potato.

What makes potatoes such good detectives?
Because they always keep their eyes peeled.

What do you call a skateboarding potato who is careful with money?
A Chipskate.

What’s a potato’s favorite horror film?
The Silence of the Yams.

When you cross a tater with a race car, what do you get?
Crashed potato.

What is a spinning potato called?
A rotate-o. 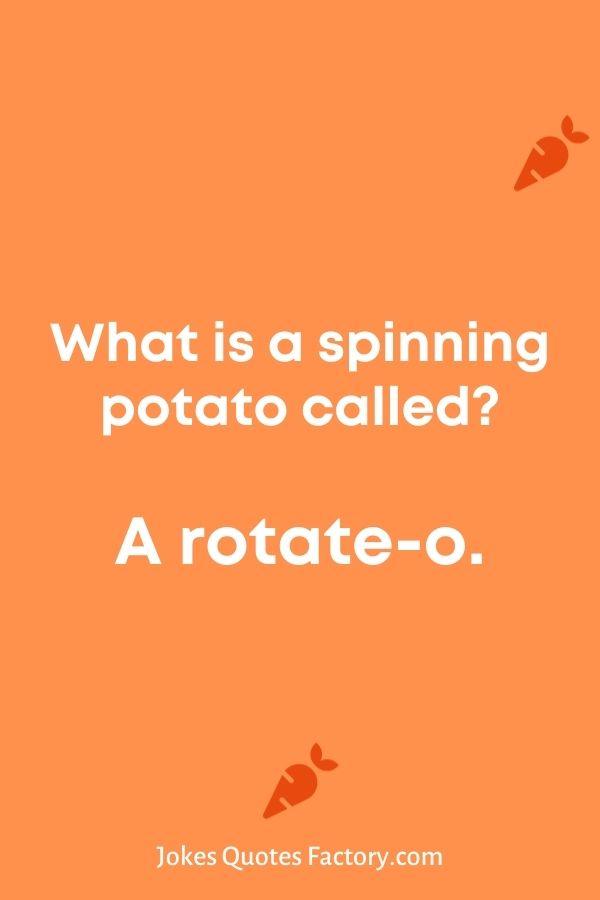 Which disease is the most deadly to potatoes?
Tuber-culosis.

What’s the best way to tell if a potato is in a bad mood?
When they’re acting salty.

What do you call a potato after it’s been chopped up?
A chip.

What do you call a good-looking french fry?
A hot potato.

What do you say when someone tells you French fries are cooked in France?
You say, “no they’re not, they’re cooked in Greece”.

What do you call a chip that makes fun of you for not knowing any potato puns?
A tater-taunt.

I met a girl who owned three french-fry factories.
I was impressed but she said it was just small potatoes.

What do you say at a restaurant when they ask whether you want salad or chips?
I’m not taking sides.

What do you call a monkey that sells chips?
A Chipmunk. 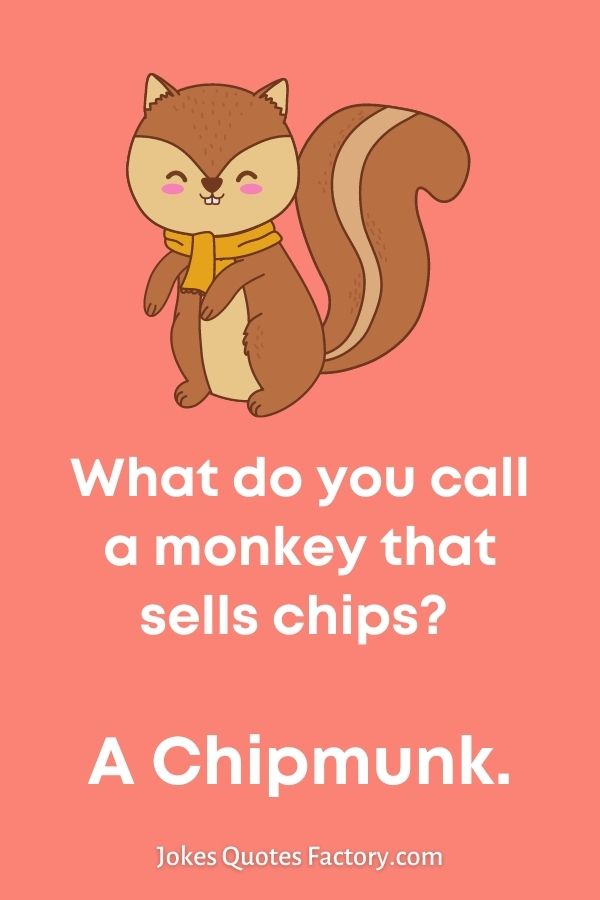 Potatoes are recognized to provide sufficient nutrients for human survival. They’re also notorious for supplying unnecessary carbohydrates and starch, which a gym rat will most likely avoid. But you don’t want to avoid these hilarious potato one-liners that will make you laugh out loud!

All potato puns are…pomme de terrible.
Potatoes are my favorite food. They seem very a-peeling to me.

Are you looking for potato puns?
You can always count on me to chip in.

To carry potatoes, what do you use?
A tater tote.

How did I win the potato hiding contest?
My carbo hide rate was so good.

Fake potatoes are called what?
An imi-tater.

When you have a yam with a broom, what do you call it?
Sweep Potato. 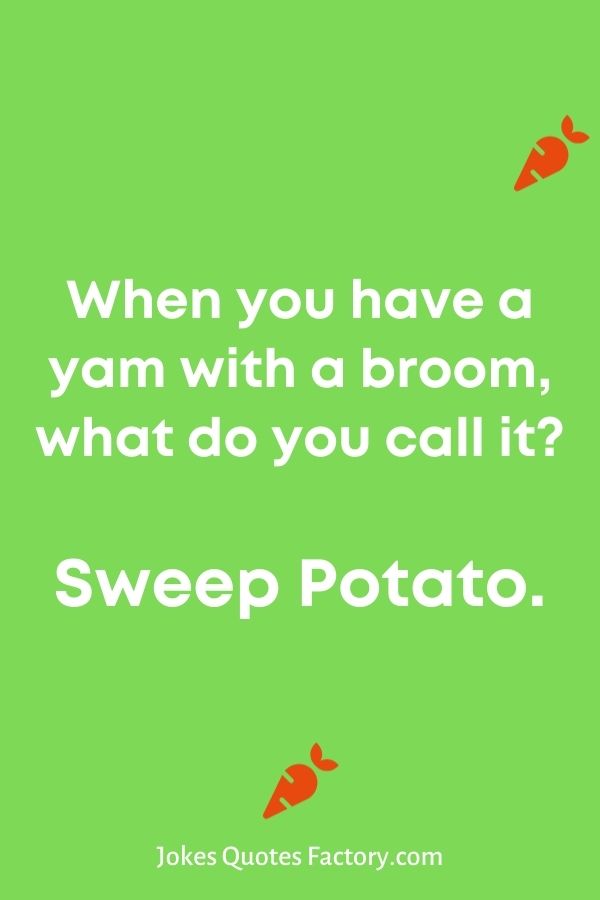 Everyone loves mashed potatoes because you can pair them with steak and other lovely meals. You can also make a lot of jokes about potatoes. That’s why we’ve compiled these mashed potato jokes, which are perfect for you and your friends!

On a sunny morning, what does a potato say?
What a mashing day!

What is a spud’s least favorite dance?
The mashed potato.

When you combine an elephant and a bunch of potatoes, what do you get?
Mashed potatoes.

Why wouldn’t you give a zombie mashed potatoes?
Because they’re already a little grave-y.

What’s the difference between mashed potatoes and pea soup?
Anyone can mash potatoes…

I like my PG-13 movies how I like my mashed potatoes.
With not a lot of skin, just a little.

My mate had one of his testicles removed today after finding a lump.
That’s how serious I am about mashed potatoes.

How are mashed potatoes similar to an online college degree?
If it ends up on your wall, you’re probably retarded.

What do you call a disabled kid who got hit by a car?
Mashed potatoes. 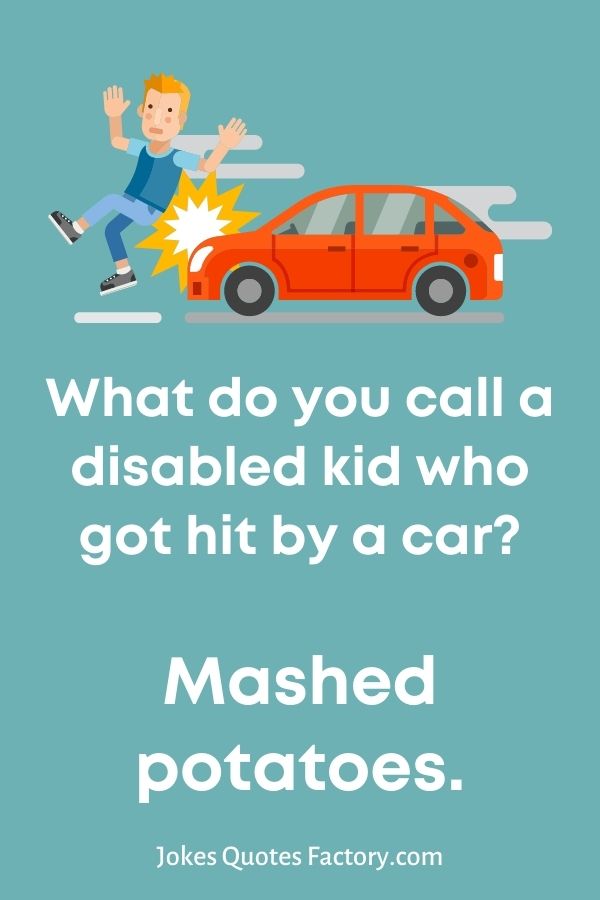 What do you call a wrecked Irishman?
A mashed potato.

What do you get when a short bus gets in a wreck?
Mashed potatoes.

Mary had a little lamb.
And a side of mashed potatoes.

Eating healthy foods like potatoes is good for your body and having a good joke is good for your mind. Combining it, we made these amusing baked potato jokes that will make your life happier and so much better.

What’s the difference between a baked sweet potato and a forcefully flying pig?
One is a heated yam, and the other is a yeeted ham.

What did the baked couch potato do when the game console locked up?
He pressed the russet button, of course.

What do you call a potato that had too much pot?
A baked potato.

What happened to the allergic baked potato?
It broke out in chives.

Did you hear about the evil baked potato?
His plans were foiled. 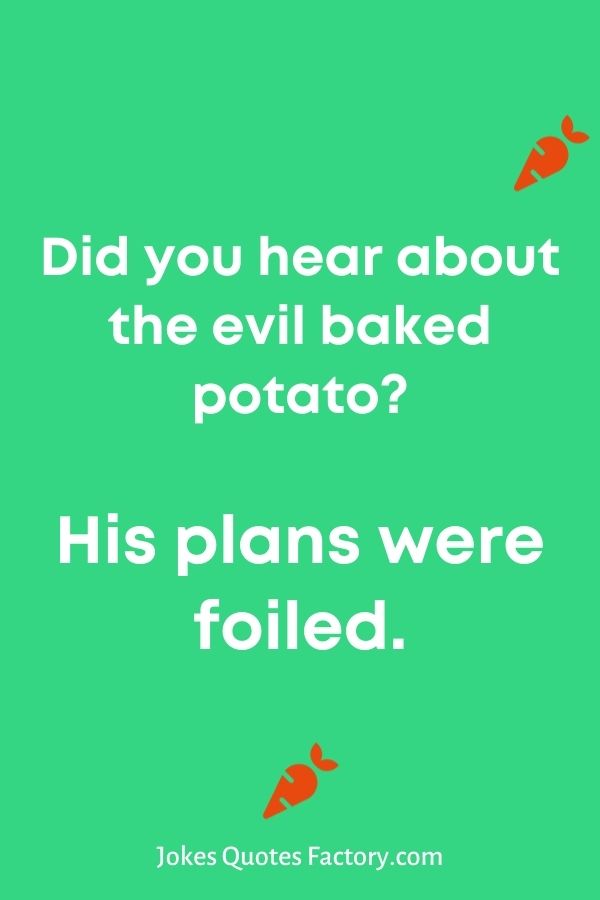 What do you call a lazy person that’s stoned?
A baked potato.

What do you call an Irish stoner?
A baked potato.

What do you call an old computer that smokes weed?
A baked potato.

As a snack, potato chip puns are fantastic, and they are fantastic wordplays that will make you giggle! Take a look at this compilation and see what I am talking about.

Every morning when I am done getting my 2 year old ready for school I call her a Canadian potato chip.
Because she’s all dressed.

Why was the potato chip working really hard?
Because it was crunch time.

What do you give to a potato chip that you want to marry?
A Ringle. 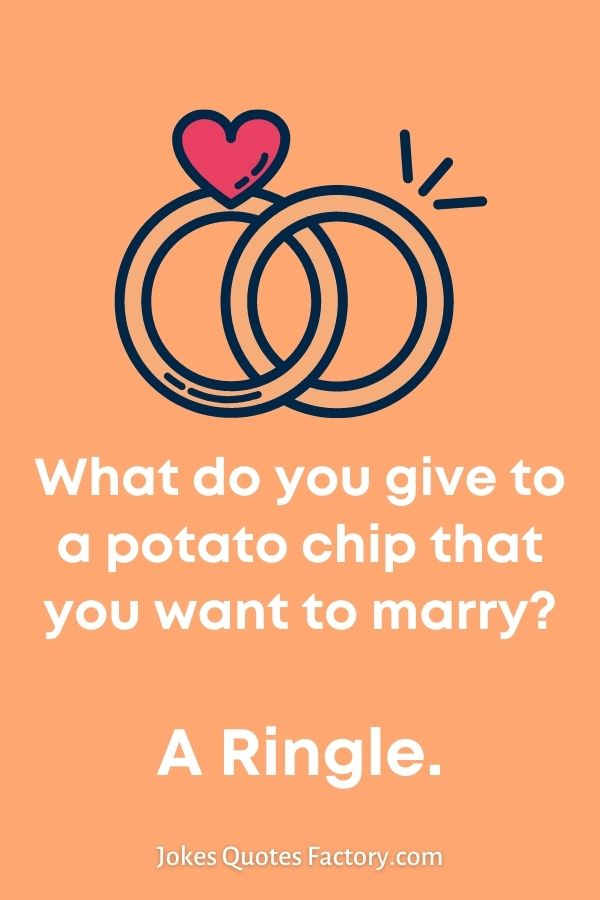 What did the potato chip bag say to the battery?
I’m Frito Lay if you’re Eveready.

My friend has a job at the potato chip factory…
He’s a Lay-borer.

They should make potato chips out of genetically engineered potatoes.
They could call them CRISPRs.

What do you call a millenial who eats potato chips?
A Chipster.

At first, we thought that potatoes couldn’t be funnier. But this list that we have put together will make you realize that potato puns are crazy funny! Laugh at our jokes as you snack on your fries!

What do you call a potato at a sports game?
A spec-tater.

Why did the pie cross the road?
She was meat and potato. 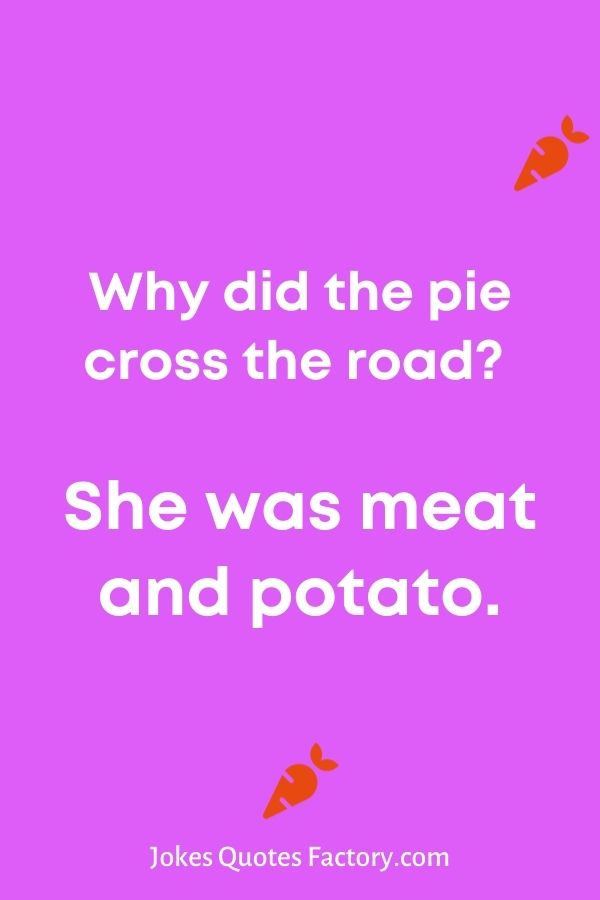 What do you get after a potato rain storm?
Spuddles.

Did you hear about that potato that had its head chopped off?
It was decap-potatoed.

What do you call a potato that’s afraid to go into hot water?
A hes-i-tater.

What do you call potatoes that have gone over to the dark side?
Vader Tots.

Are you tired of the cheesy and boring pick-up lines? Well, say no more. Take a look at our hilarious potato pick-up lines. I’m sure that this will make your girl giggle!

Do you like potatoes?
Then I’m sure you want to get mashed?

If you were a potato, I would only eat potatoes every single day of my life. 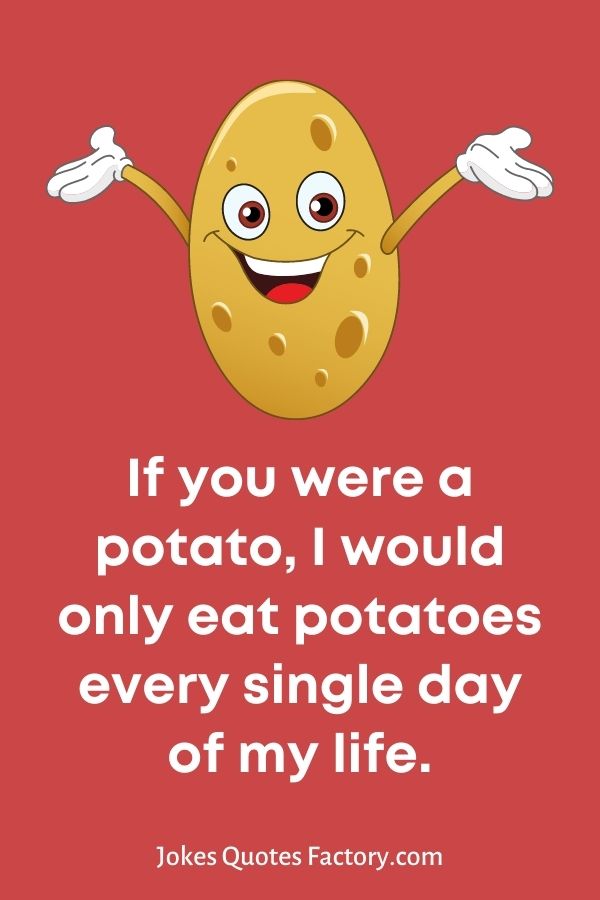 Baby, you have stolen my heart and I want to hit you down low like a tuber.

I’m sure you are the sweetness in potato.

I feel like popping you with my potato gun because you are so hot.

Come be with me girl, I want to prod you with my huge potato.

Let’s ride around town in my comfy potato t-Uber.

If I played a game of hot potato, I would lose every time because I wouldn’t be able to let you go.

If you were a potato, you would be the sweet type.

Hey potato, how about I have you for breakfast, lunch, and dinner?

Hey baby, you must be a sweet potato;
I find you so a-peeling. 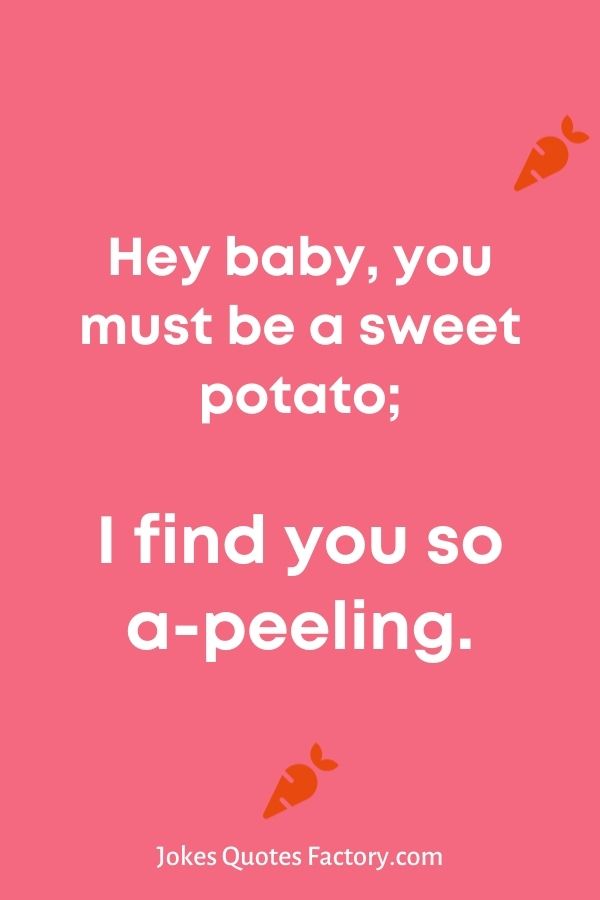 Do you like potatoes? If you do, you’ve come to the perfect place because we’ve compiled these funny potato names puns for you to have a great time laughing!

Potatoes are responsible for many awesome meals, including french fries, mashed potatoes, and potato jokes and puns. Potatoes are not only a good source of carbohydrates, but they may also provide you with plenty of reasons to chuckle! We hope that you liked these jokes that I’m sure you’ve never heard before. And if you do like it, feel free to share it with your friends! 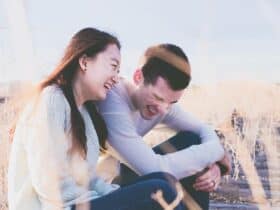