Brightly colored, lovable and easy-going, parrots make wonderful pets for bird lovers of all ages. Whether you’re a new parent or you’ve had your parrot for a few years, here are some easy ways to show it more love and attention. As with many other animals, birds that do not know their surroundings, new routines, unusual noises, or a new owner can become frightened.

Whether your pet parrot is new to you, before you try to up your bonding game, let him come to you. Make yourself available by sitting close by when they have time away from their home, but don’t approach them. Let them know your presence first. Who knows? Maybe after a while, they will feel comfortable coming to you.

Whether you’re looking for parrot jokes, puns, or one-liners, this collection of parrot jokes is a great way to make your kids laugh.

Which side of a parrot has the most feathers?
The outside! 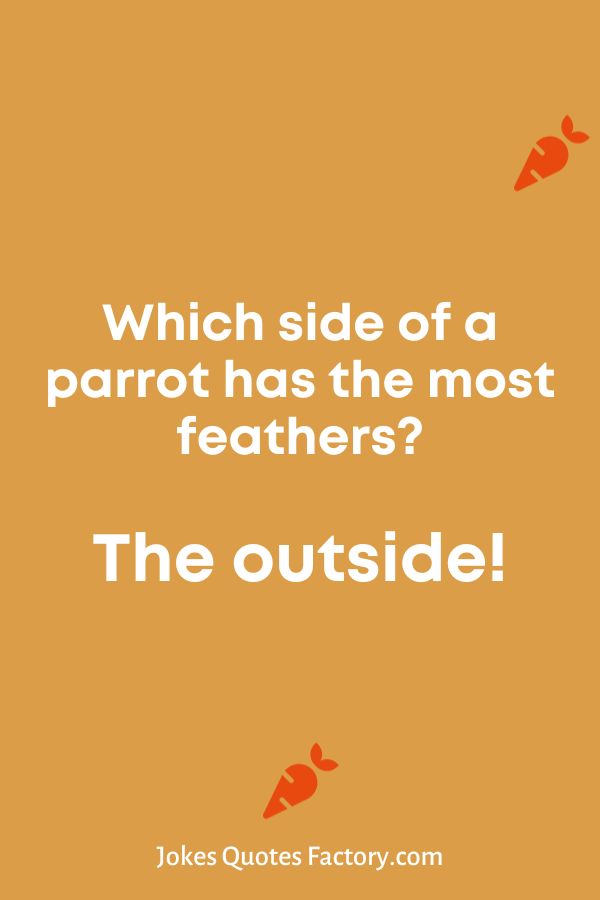 What does the parrot get at the end of a restaurant meal?
The bill!

Why are parrots the life of the party?
Every day is their bird-day!

Why are parrots so loyal?
They are a man of their bird! 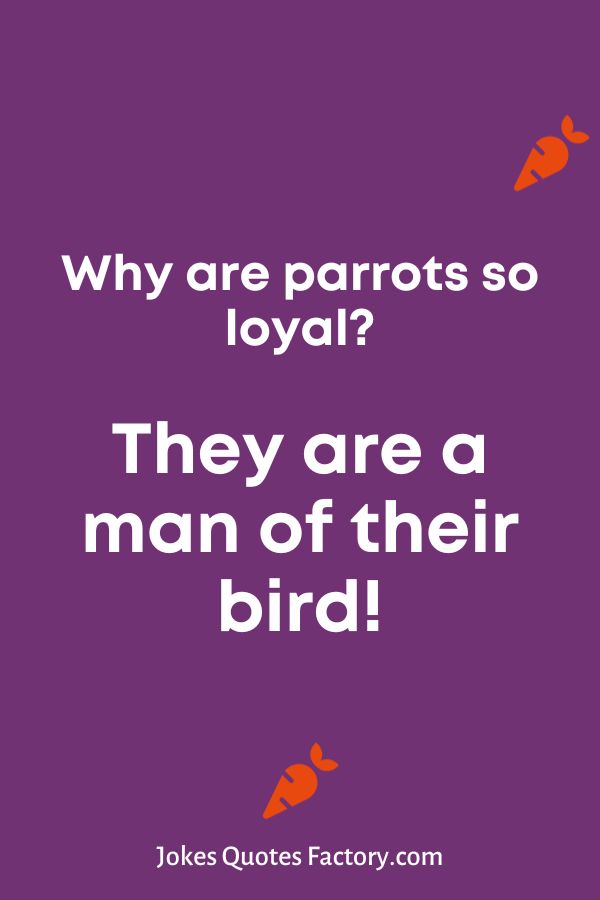 Knock knock
Who’s there?
A parrot
A parrot who?
A parrot-ly some birds can talk!

Why are two parrots better than one?
One parrot can’t carry a coconut, but toucan!

What does the mummy parrot say to her baby?
Beak-areful! 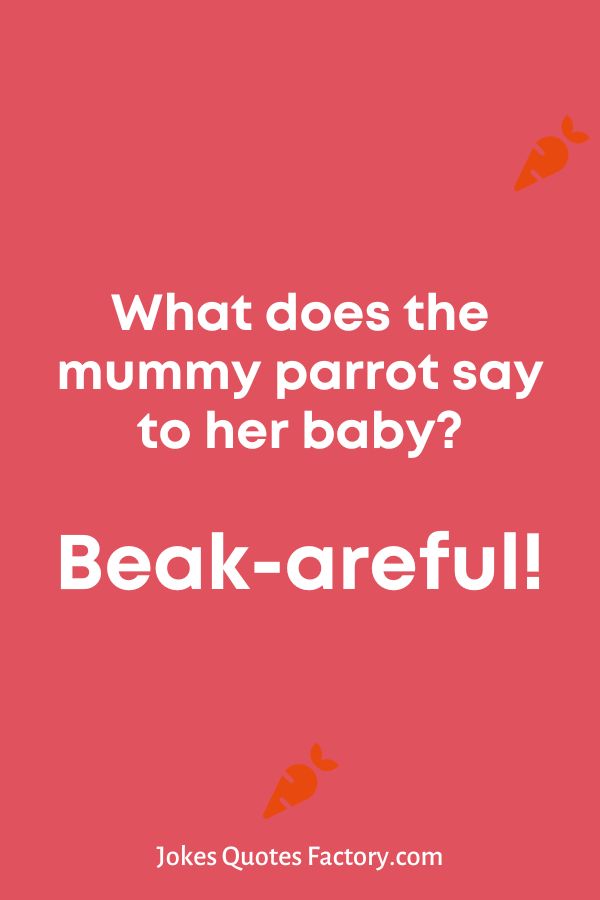 Why did the parrot cross the road?
Just beak-ause!

Where do parrots go when they die?
Parrot-ise!

What is the only animal smarter than a talking parrot?
A spelling bee! 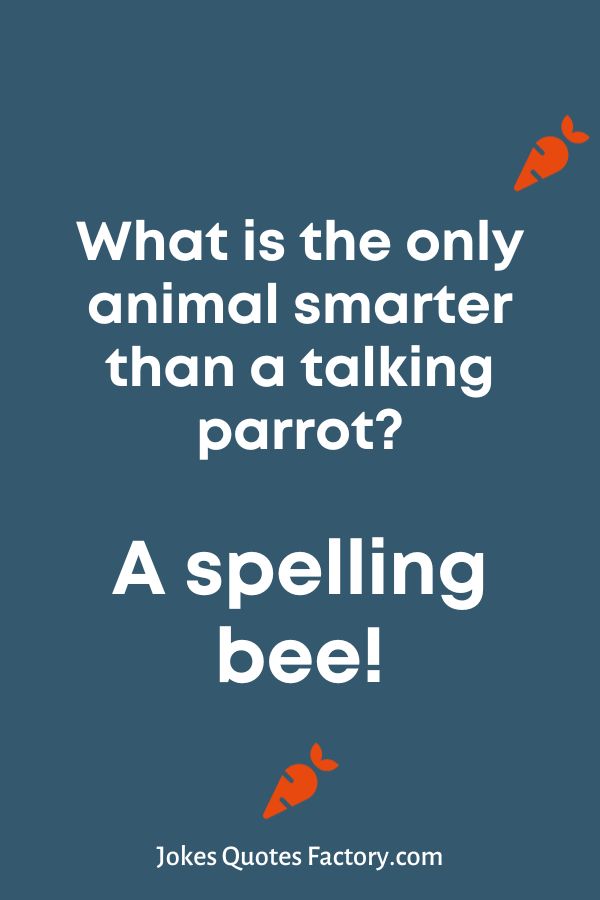 What’s orange and sounds like a parrot?
A carrot!

What do you get when you cross a parrot and a centipede?
A walkie-talkie!

Why is a parrot a bit like a shark?
It can talk your ears off! 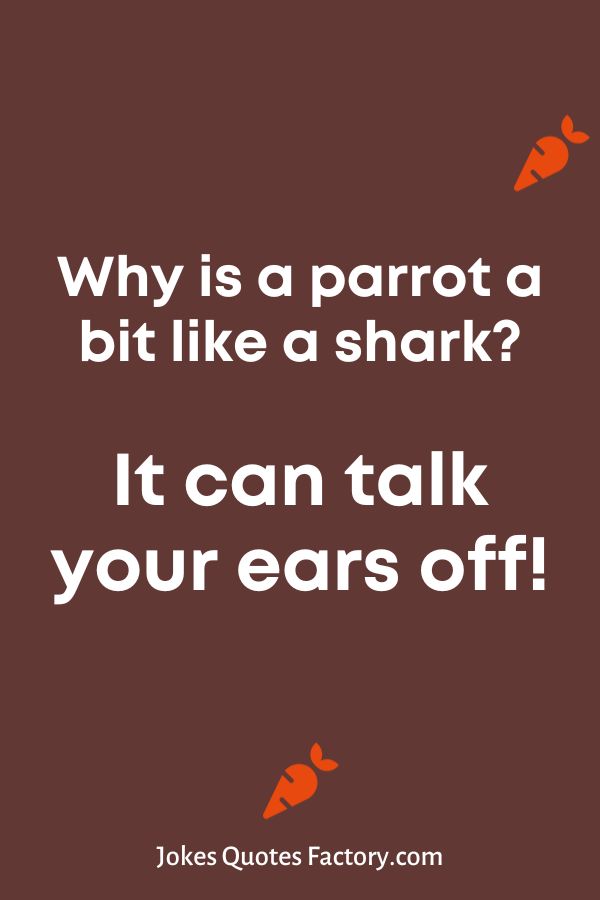 What is a baby parrot’s favorite game?
Beak-a-boo!

What is a parrot’s favorite game?
Hide and speak!

There is nothing better than a few puns on parrots to make the whole family happy.

If you have a parrot, it says a lot about you! 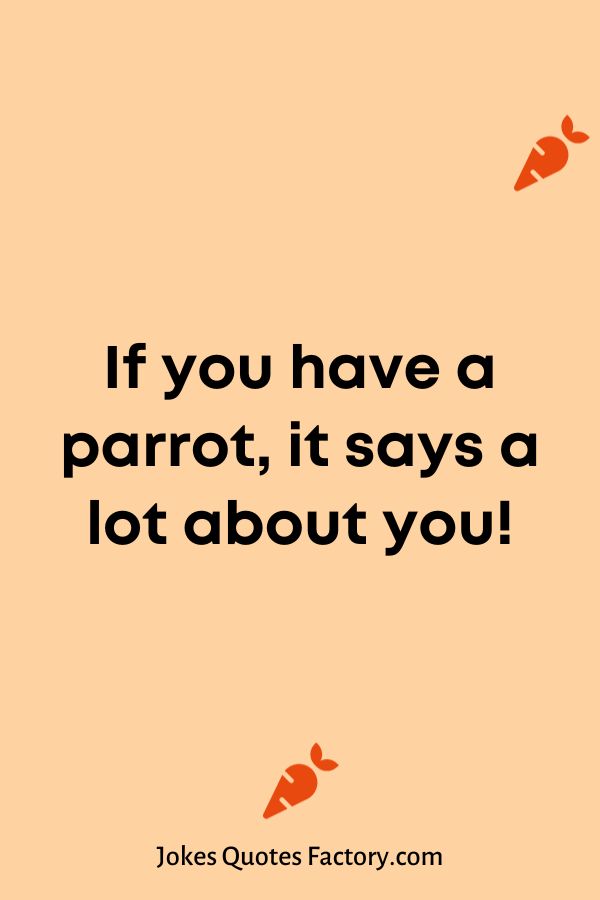 Two parrots are sitting on a perch. One says to the other: can you smell fish? (a perch is a type of fish)

My fat parrot escaped from its cage… To be honest, it’s a weight off my shoulders!

I’m giving away my legless parrot, no perches necessary! 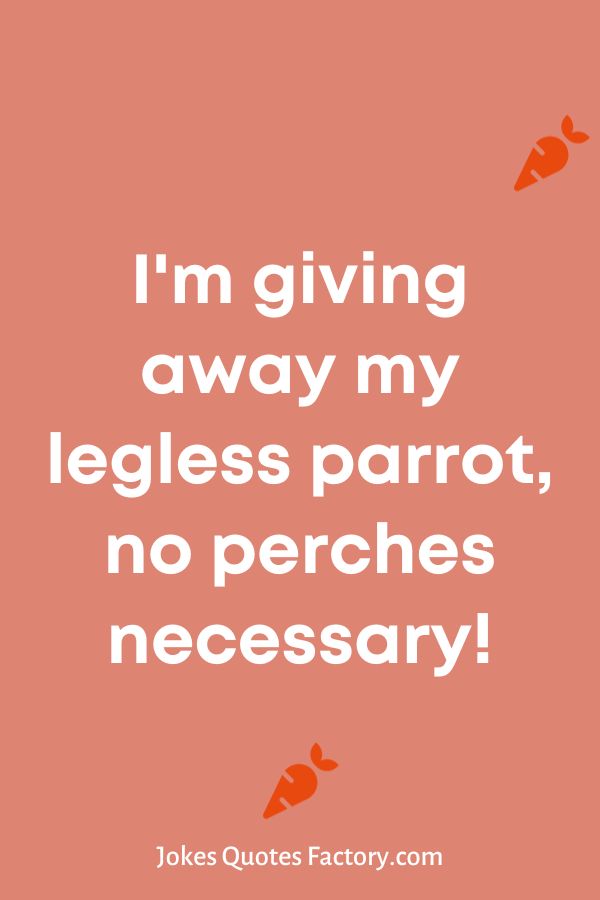 Now is the best time to buy a parrot, I hear they’re going cheep!

Do you think you know more parrot jokes than I do? Toucan play that game!

If I had a talking parrot, the first thing I would teach it to say is “Help, they’ve turned me into a parrot!” 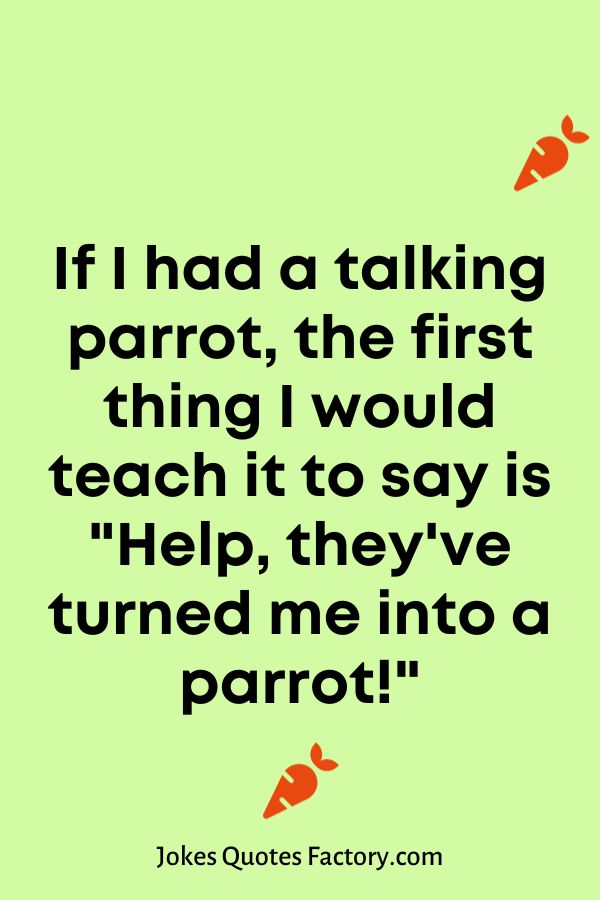 Someone stole my alarm clock, my parrot, my lamp, and my coffee; I don’t know how they sleep at night.

Make your kids laugh with these funny jokes!

Where do parrots get away on holiday?
To the beak! 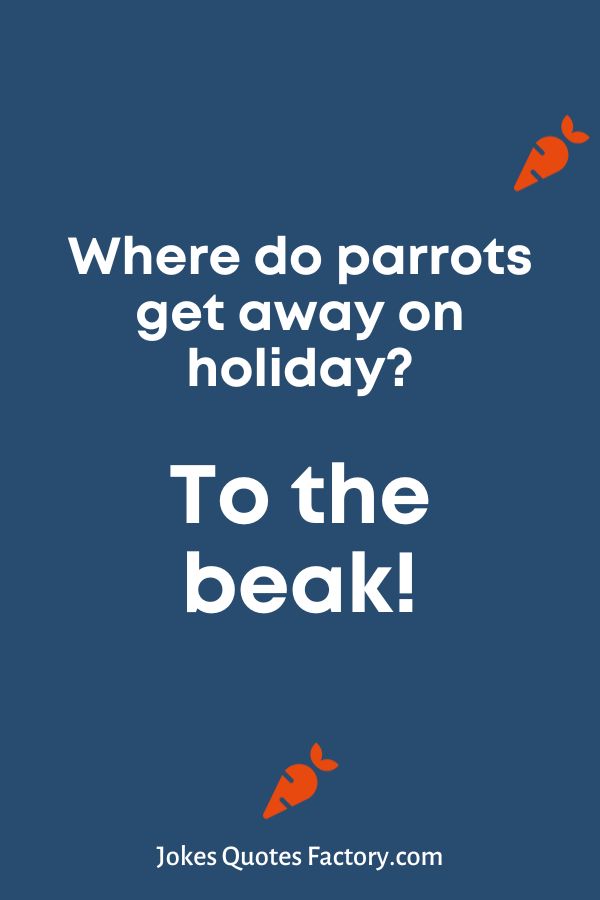 What does the like to parrot wear to the beach?
A beak-ini!

What do you get if you cross a pigeon and a parrot?
Voicemail!

Why was the pirate sad when his parrot left?
It gave him the cold shoulder! 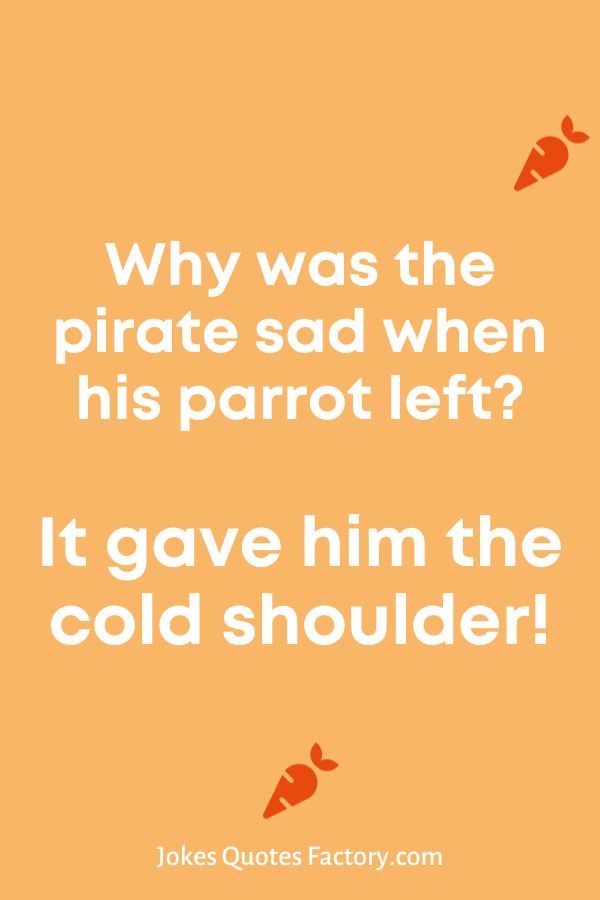 What is a parrot’s favorite game?
Hide and Speak!

What has four legs, four eyes, and a net?
Four pirates looking for a lost parrot! 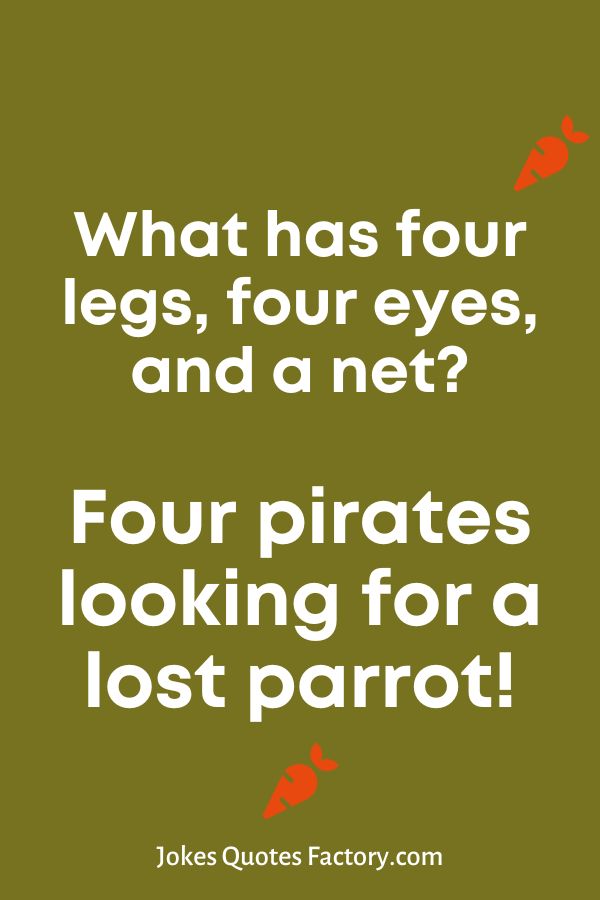 Why are parrots so good at improvisation?
Because they know how to wing it!

With their frequent talking behavior, parrots are perfect for endless funny stories.

A postal carrier is working on a new beat. He comes to a garden gate marked BEWARE OF THE PARROT! He looks down the garden and, sure enough, there’s a parrot sitting on its perch. He has a little chuckle to himself at the sign and the parrot there on its perch. The mailman opens the gate and walks into the garden. He gets as far as the parrot’s perch, when suddenly, it calls out: “REX, ATTACK!”

One day a man went to an auction. While there, he bid on an exotic parrot. He really wanted this bird, so he got caught up in the bidding. He kept on bidding, but kept getting outbid, so he bid higher and higher and higher.

Finally, after he bid way more than he intended, he won the bid – the fine bird was finally his! As he was paying for the parrot, he said to the Auctioneer, “I sure hope this parrot can talk. I would hate to have paid this much for it, only to find out that he can’t talk!” “Don’t worry”, said the Auctioneer, “He can talk. Who do you think kept bidding against you?”

Before the collapse of communism, this Russian guy loses his pet parrot. He looks everywhere, all around the neighborhood, in the park, everywhere. He can’t find the parrot. Finally, he goes around to the KGB office and tells the desk officer his problem. The officer is a little puzzled. “Look, comrade, I’m sorry you lost your bird, but this is the KGB.

We don’t handle missing animal reports.” “Oh, I know that”, says the guy. “I just wanted you to know if you do find my parrot… I don’t know where he could have picked up all his political ideas.”

A man goes into a pet shop to buy a parrot. The shop owner points to three identical-looking parrots on a perch and says, “The parrot on the left costs $500.”

“Why does the parrot cost so much?” asks the customer. The owner says “Well, the parrot knows how to do legal research.”

The customer then asks about the next parrot, to be told that this one costs $1,000 because it can do everything the other parrot can do plus it knows how to write a brief that will win any case.

Naturally, the increasingly startled customer asks about the third parrot, to be told that it costs $4,000. Needless to say, this begs the question, “What can it do?” To which the owner replies, “To be honest, I’ve never seen him do a darn thing, but the other two call him Senior Partner.”

A short elderly woman burst into a pet store. “I want to buy a canary, but it’s got to be a good singer! I’ve got good, hard US cash, but I’m only paying for a good singer.”

The shop owner began moving a ladder towards a small cage on a shelf about fifteen feet up, near the ceiling of the store. “Ma’am, I’ve been in this business for forty years and the best singer I’ve ever heard is in that cage.”

“Don’t think I’m gonna feel obligated to pay for something I don’t want just because you’re climbing up a ladder like a monkey. I want a canary, but it’s got to be a singer.”

By this point, the shopkeeper was coming down the ladder. “Ma’am, this bird is a veritable feathered Caruso!” He placed the cage on the counter and the bird burst into melody after melody.

Awed, the woman murmured, “Why, he is a good singer.” Suddenly she screamed, “Hey, this bird’s only got one leg!”

The pet store owner was unperturbed. “Lady, what do you want, a singer or a dancer?”

Parrots communicate in two ways – through their voices and body language. You can communicate using the methods they prefer by speaking softly, playing music, and singing softly to them.

In the wild, parrots often share meals. When you do the same with your pet parrot it shows him that you are part of his flock. Make sure that what you’re offering your pet is safe for them to eat and low on salt and seasonings. Avoid chocolate, junk food, large amounts of dairy products like hard cheeses and yogurt, avocado, processed meats, onions, sprouted lima, fava, and navy beans, fruit pits, apple seeds, and rhubarb. If your parrot is too hesitant to take a bite, try our next recommendation.