Do you know who created Little Johnny jokes? Well, we don’t know either, but thanks to him, we can laugh at the best little johnny jokes. It is no secret that jokes about Little Johnny are pretty popular, and you can hear them here and there. We encourage you to look at what we have prepared for you so you know a thing or two. You’ll never know when you’ll need it.

You can also check best jokes for kids to get your dose of funny jokes. Laugh all you want!

Ever miss going to school? These Little Johnny Teacher jokes will make you laugh hard! Share with your friends and colleagues and be the life of the party!

While grading essays, the teacher noticed that Little Johnny’s paper about ‘Family Pets’ was the same as his brother’s.

So she asked, “Why did you copy your brother’s homework?”

Little Johnny said, “No, I didn’t! We just have the same pets.”

Little Johnny hated going to church every Sunday. During this particular sermon, Johnny got so bored that he just wanted to go home.

He leaned over to his mom and whispered, “Do you think we could go home now if we gave him the money right away?” 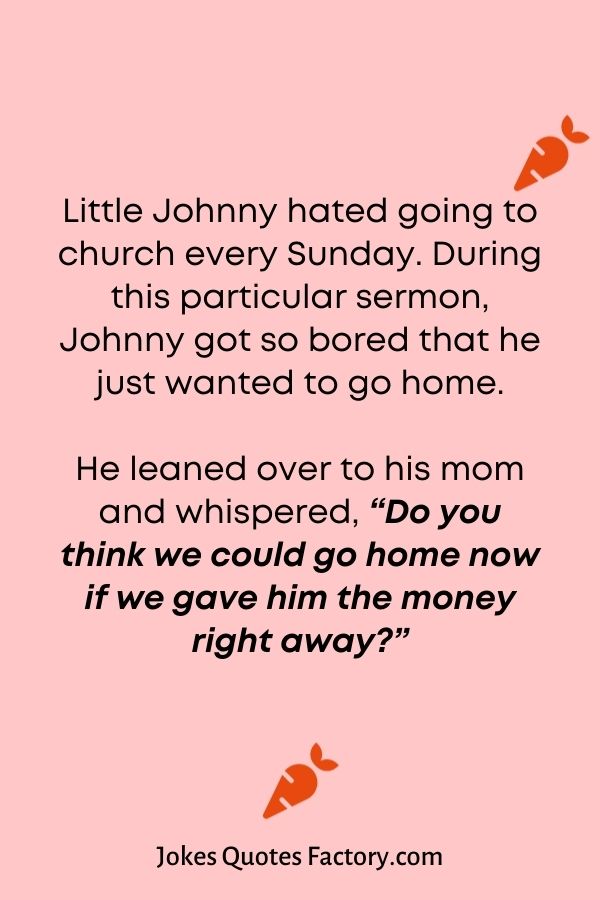 The teacher asked the class how they spell the word “elephant.”

When the teacher said that it’s wrong

Little Johnny said, “Well, it may be wrong, but that’s how I spell it.”

A teacher asks Little Johnny, “What do you want to be when you grow up?”

Little Johnny says “I wanna be a billionaire, going to the most expensive clubs, take the best bitch with me, give her a Ferrari worth over a million bucks, an apartment in Hawaii, a mansion in Paris, a jet to travel through Europe, an Infinite Visa Card and to make love to her three times a day”.

The teacher, shocked, and not knowing what to do with the bad behavior of the child, decides not to give importance to what he said and then continues the lesson.

“And you, April? ” the teacher asked April.

Little Johnny was asked to use the pronoun “I” in a sentence.

The teacher cut him off and said that the “I” has to be followed by an “am.”

Johnny continued, “All right. I am the ninth letter.”

The teacher decided to teach the children in her class how to count.

When it was Johnny’s turn, the teacher asked what came after the number ten. 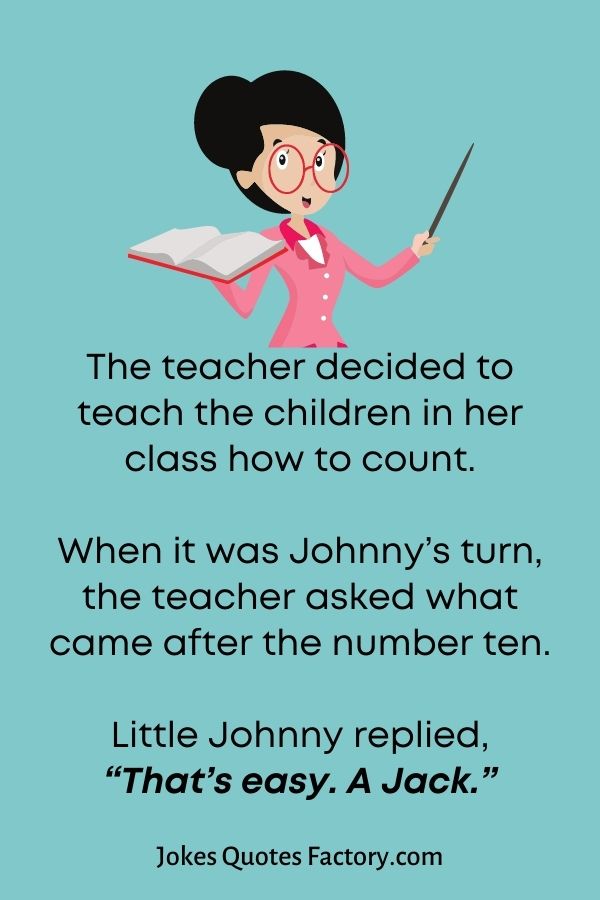 During parent-teacher conferences, the teachers asked the students what their parents did.
Little Johnny said that his father is a magician. The teacher asked what his favorite magic trick is.
Johnny said, “Well, he likes to cut people in half. I have two half-siblings.”

The teacher asked the class to stand up if they ever feel stupid.
Johnny groaned before standing.
She asked, “So Johnny feels stupid occasionally?”
Little Johnny replies, “No, but it must be hard for you to stand alone.”

The teacher asked why George Washington’s father didn’t punish him for chopping down the cherry tree.
Little Johnny said, “Easy. Because the ax was in George’s hands.”

During art class, Little Johnny decided to draw God.
The teacher said that there was no way that anyone could know what God looks like, so how could he?
Johnny said, “You’ll know what he looks like in a few minutes.”

The nun teaching the class asks, “Where do you sense Jesus in your life?”
Little Susie, being a good girl says, “I see Jesus when I pray.”
Little Timmy says, “I can feel Jesus’ presence during Mass.”
Little Johnny, with his hand waving eagerly in the air, is finally called on. Johnny says, “Jesus is in my bathroom every morning.”
The nun, obviously confused, asks why Johnny thinks this.
Little Johnny answers saying, “Each morning that my Father is late to work, he pounds on the bathroom door saying, JESUS CHRIST, ARE YOU STILL IN THERE?”

Little Johnny’s teacher went to pay his family a home visit.
When Johnny’s grandpa saw her walking over, he told him to hide.
Johnny quickly said, “No way. You need to hide, grandpa. I told her yesterday that I had to go to your funeral.” 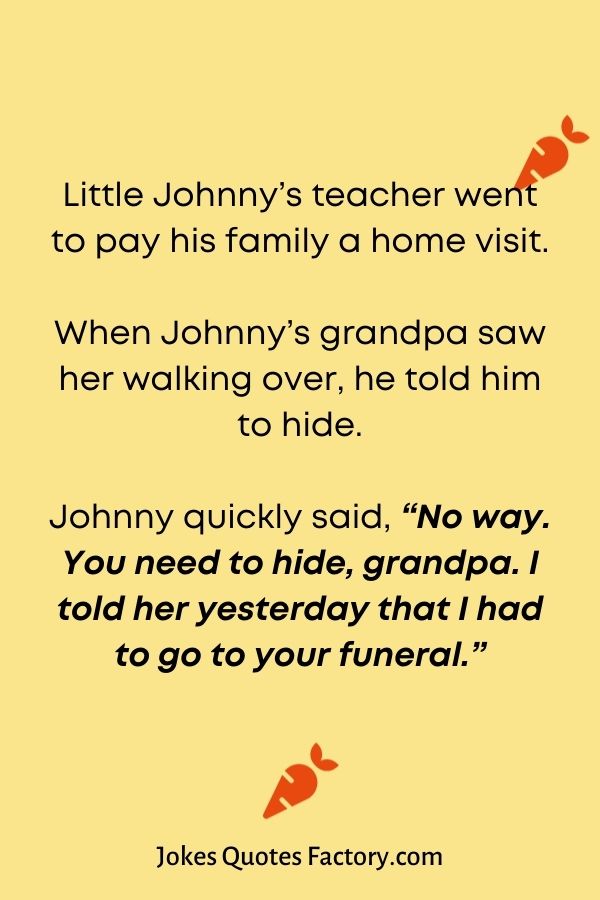 This week in Little Johnny’s English class, they were learning about punctuation.
When they got to periods, Johnny asked, “Why are periods so important?”
The teacher informed him and asked why he wanted to know.
He said, “When my sister told us that she missed a period, my father began yelling, and my mom passed out.”

Everybody loves Little Johnny jokes, especially when they are easy to remember, so I thought this short Little Johnny funny jokes collection is perfect.

One day, Lil Johnny told his parents that he was ready to live alone.
They were very proud of him and supportive, until Johnny said, “Great, I left your luggage next to the front door. See ya!”

Daisy: “Why do you have two different colored socks on? One’s blue, but the other is green.”
Little Johnny: “I’m not sure. It’s weird. There was another pair exactly like this one at home.”

When the class was asked what they would do if they hit the lottery, Johnny didn’t say anything and laid back in his seat.
He said that if he hit the lottery, then he would have a secretary to answer the question.

Johnny tried to buy a toy car with monopoly money at the store.
The cashier said, “There’s no way I can take this. It’s fake.”
Johnny said, “Well, the car’s not real either.”

Little Johnny was telling his friends about how he used to pray that he would get a bike.
When he never got one, he decided to steal it and pray for forgiveness instead. 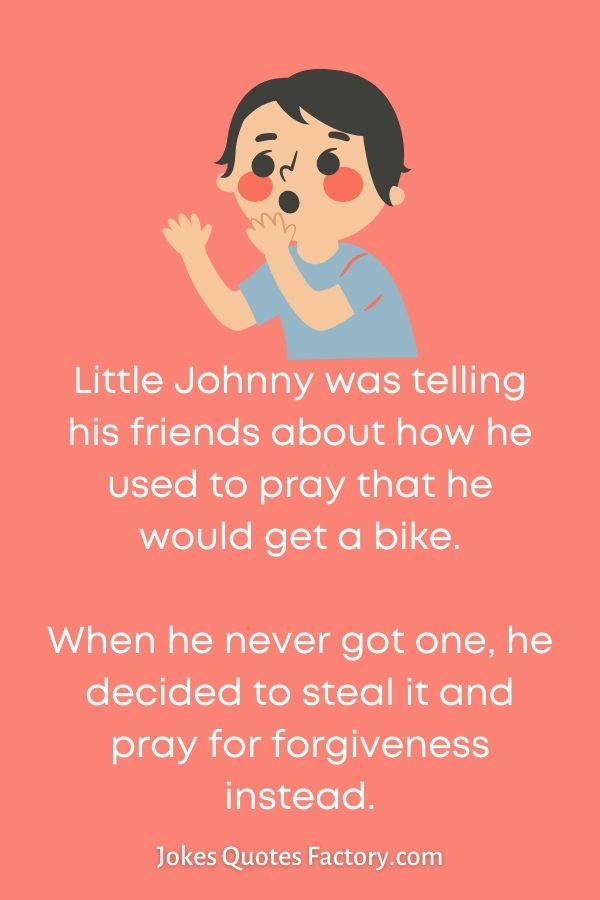 Little Johnny asked his grandpa to croak like a frog.
He did it and asked why Johnny wanted to hear him croak.
Johnny said, “Mommy said that we’ll be loaded when you croak.”

Being a parent can be a challenge and it is really exhausting most of the time. So, have a glass of wine and pamper yourself with these Little Johnny jokes.

Johnny asked his mother for his allowance a few days early.
She said no, but he said that he’d tell her what their cleaning lady said to his father when she was gone.
His mother handed him the money.
Johnny said, “All dad said was, ‘Make sure you wash my underwear, too.’”

You can also have a look at BEST Butt Jokes That Are Just Booty-ful.

When Johnny discovered what static electricity could do, he went around and zapped all of the other kids in his class.
What did his mother do? She grounded him.

Mother: “Johnny, how far have you gotten with your work?”
Little Johnny: “Well, about six miles.” 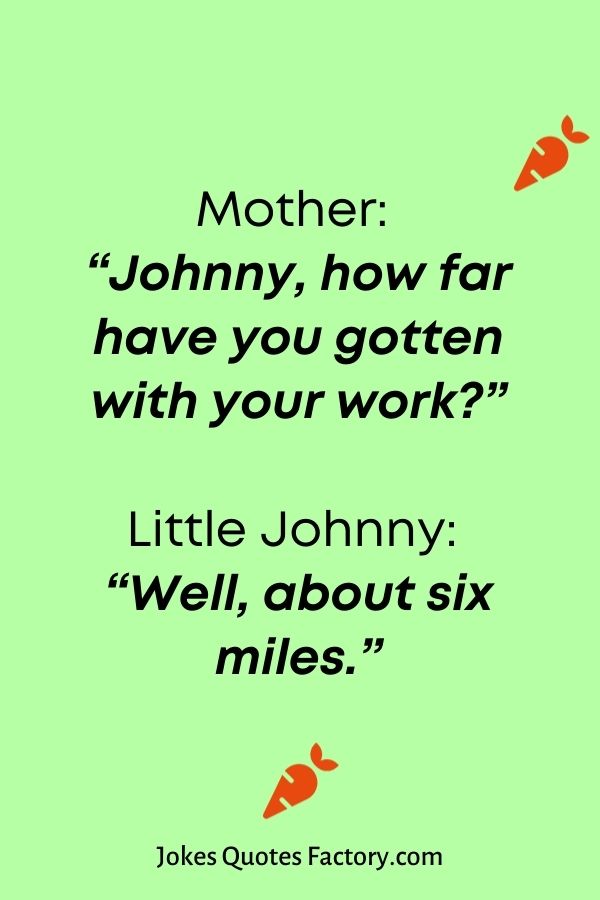 Sunday school teacher asked Little Johnny, “Do you believe in the Devil?”
“No,” said Little Johnny. “It’s the same as Santa Claus. I know it’s my daddy.”

When asked what he wanted to be when he grew up, Little Johnny said, “A detective.
So that way I can be just like dad.”
The teacher found this surprising because she didn’t know he was a detective.
Johnny said, “Oh no, he’s not a detective. He’s a thief.”

Little Johnny’s new sibling was crying and screaming for hours.
He asked his parents where they got him from.
They reply, “Oh, we got him straight from heaven.”
Johnny said, “Jeez. I see why they kicked him out of there.”

Who wants some dirty jokes? You will surely enjoy the jokes that we have for you here. Look through these jokes and share them with your partners!

Read more: Funny and Dirty Jokes: A Combination of Tickle and Giggle

Mom and dad are having sex when little Johnny walks in.
Quickly, dad tells him to leave.
When mom and dad come out of the room, they explain to Johnny that sometimes daddy’s get a big tummy and mommy’s have to jump on it so it will deflate.
Then Johnny replies, “But why does mommy have to deflate it when Ms. Jane next door just comes over every day to blow it back up?”

Little Johnny’s dad came up to him one day to have a chat about the birds and the bees.
“Please stop, dad! I really don’t want to know!” yelled Little Johnny.
Confused by this sudden outburst, his dad asked him what was wrong. “
Oh dad,” Johnny sobbed. ”
At age six you told me the Easter Bunny didn’t exist.
At seven, you told me the truth about the tooth fairy, and at eight you stripped away my belief in Santa Claus.
If you now tell me that grown-ups don’t really have sex, then I’ve got nothing left to live for!”

Did we sound funny enough to make you laugh? Well, we hope we did. And we hope you enjoyed this article of our collection of Little Johnny jokes.

Here are more jokes to give you more giggles and laughter: