To brighten a hunter’s mood after a hard day’s hunting, nothing beats an amusing hunting joke. Once you get into it, hunting may get really exciting; nevertheless, these dad jokes about hunting can alleviate all of your worries.

Funny jokes about hunting are fun and easy to remember. To many hunters, the thrill of the hunt is only exceeded by the sheer amusement of hearing these humorous jokes about the activity. Even for a deer, jokes about deer hunting are too humorous. As a result, we’ve compiled a list of the funniest hunting jokes around.

Going on hunting trips on the woods? First, you better gear up and never forget to bring some deer hunting humor that we have compiled for you.

What did the hunters eat while hunting for a deer?
They ate sour-doe bread. 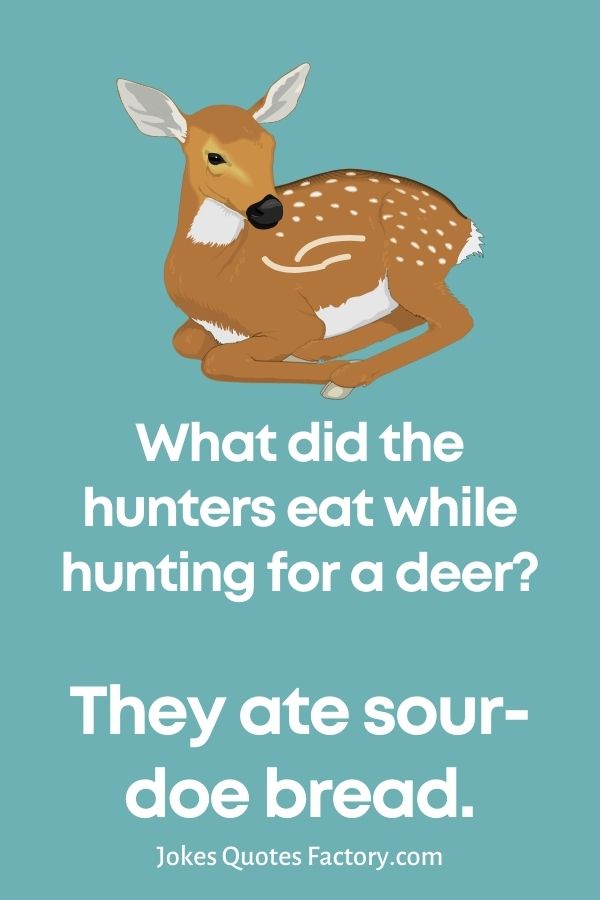 A man is standing on the bow of the Titanic as it is sinking, holding a glass of whiskey.
He says: “I asked for ice, but this is ridiculous”

Why would hunting mushrooms be unethical?
It would harm one’s morels.

What was written on the hunting board?
“Bear left.”

What did one hunter say to another one when he spotted a deer?
Are you up for some deer-licious dinner?

What did the eagle say to the hunter?
“It’s ill-eagle to hunt!”

What did the hunter do with the fish in Chernobyl?
He did nuclear fishing.

What was the cost of hunting at the zoo?
Couple bucks.

Why was the hunter’s hunting considered so weak?
Because he took a fowl shot.

What did the tiger say to his family before hunting for the food?
“Let us prey.” 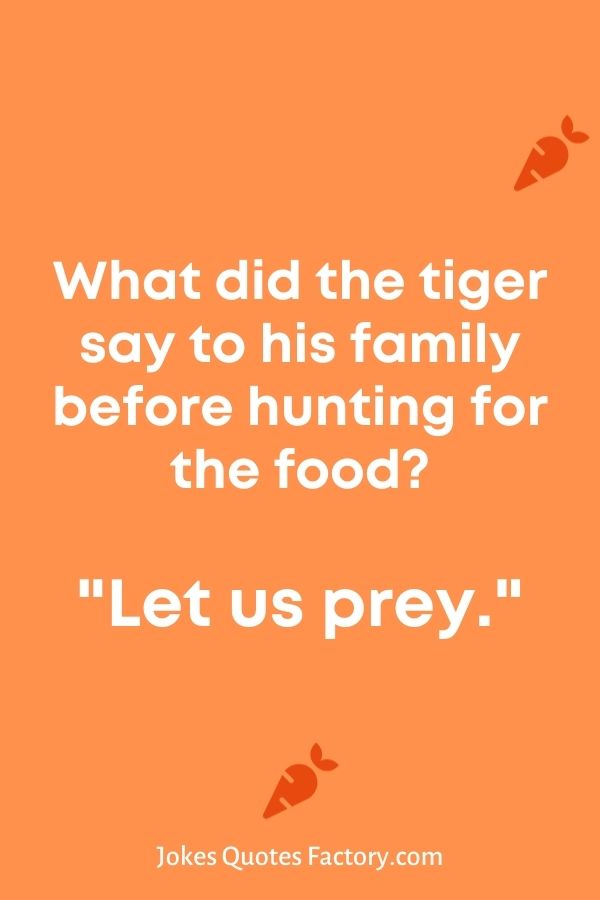 Why did the hunter not know what he was hunting?
Because he was sleep-hunting!

How did the penny hunting go?
It went cent by cent.

Among all living things on the planet, deer are the only ones that have antlers. In the animal kingdom, antlers are the fastest growing living tissue. Deer hunters, are you ready for some hilarious on liners about hunting deer? We have a few for you.

A farmer joke, You know, nearly all of John Deere machines are good except this one series.

I meet guy with a deer on the end of each arm, He was bambidextrous.

I traded a deer for some chickens, Overall it was a good deal. It only cost me a buck.

I tried to trade a deer for fireworks. 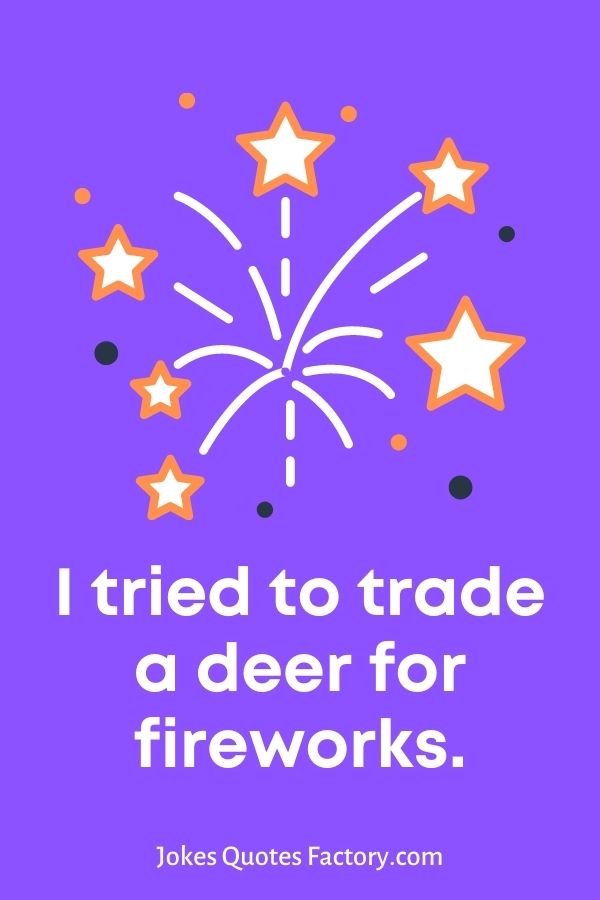 I want the best bang for my buck.

If I had a buck for ever deer pun I’ve made, I’d have lots of doe.

This is due to the fact that deer have incredibly strong hind legs, and the average house can’t jump.

What do you give a deer with an upset stomach?
Elka Seltzer.

Hey, has anyone seen the new deer burgers they sell at Walmart?
I heard they only cost a buck.

Why did the deer cross the road?
To prove he wasn’t a chicken.

What do deer read?
Stagazines.

How did the deer keep an eye on the hunter?
Through its deer stand. 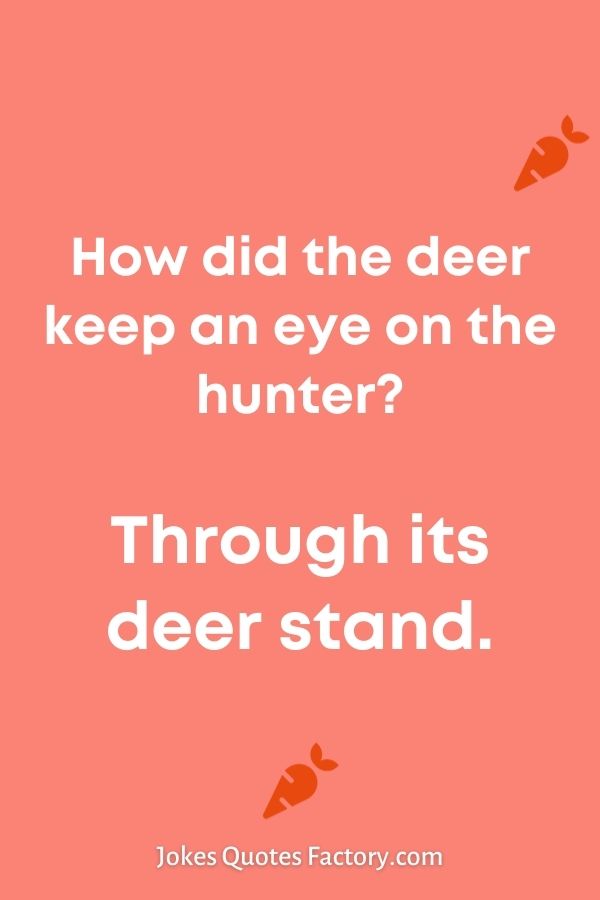 What do you call a deer with no eyes?
No-eye-deer.

Why did the hunter miss his mark?
He was not aiming deerectly for it.

What do teenagers do at slumber parties?
Truth or deer.

Who did Bambi invite to his birthday party?
His nearest and deer-est friends.

Who puts money under the deer’s pillow?
The hoof fairy.

What did Homer Simpson say when he ran over a deer?
“DOE!”

What did the big game hunters give their kids as presents?
Stuffed deer. 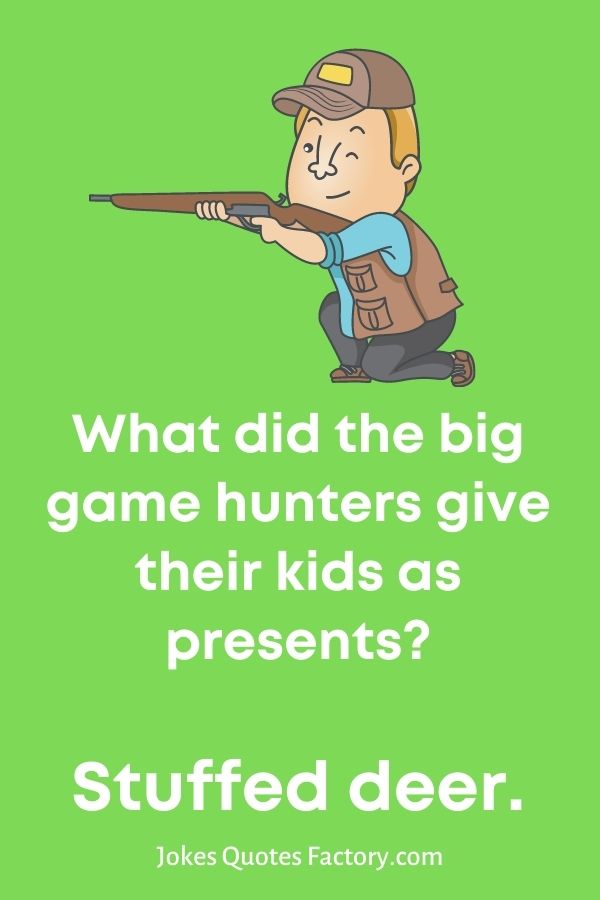 How do you see a deer behind you?
Hindsight.

What did the deer say after prancing around a cloning machine for an hour?
“I feel like a million bucks!”

How do you save a deer during deer season?
You hang on for deer life.

One day, while hunting, a kid asked his father what the name of the deer that lost both of his eyes was? The father replied, “Sorry, I have no I-deer.”

It’s hard to imagine anything more exhilarating for a bird hunter than returning home with a handful of bounty. If you’re having a bad day, take a peek at these humorous bird hunting jokes to help you get back on track.

What do you call a parrot that flew away?
A polygon. 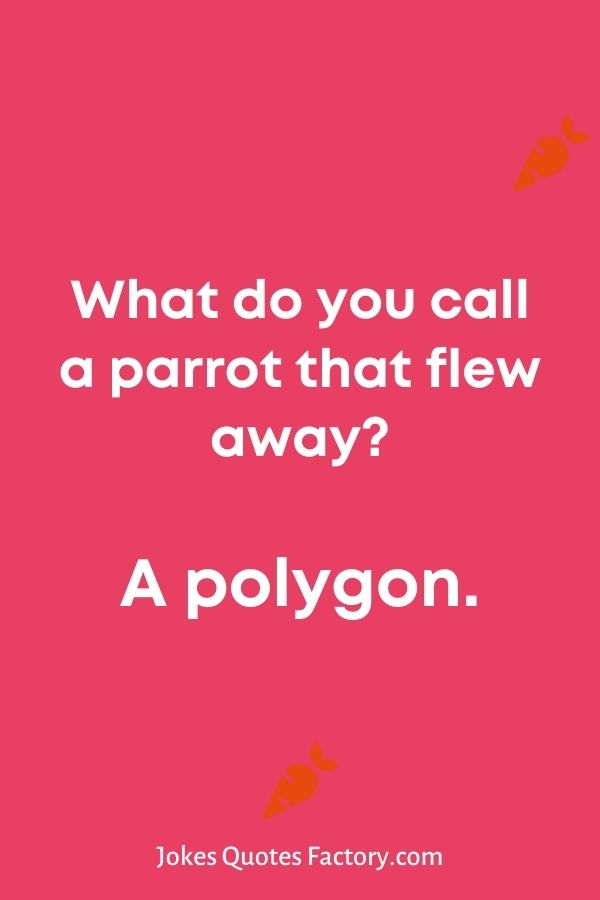 What do you call a very rude bird?
A mockingbird!

This bloke said to me, “would you be up for doing an impression of a pheasant?”
I said, “sure, I’m game!”

What did the rich pigeon call the poor pigeon?
A pheasant.

What you get when you splice the genes of a pheasant, a duck, and rhino?
Phuckifino. 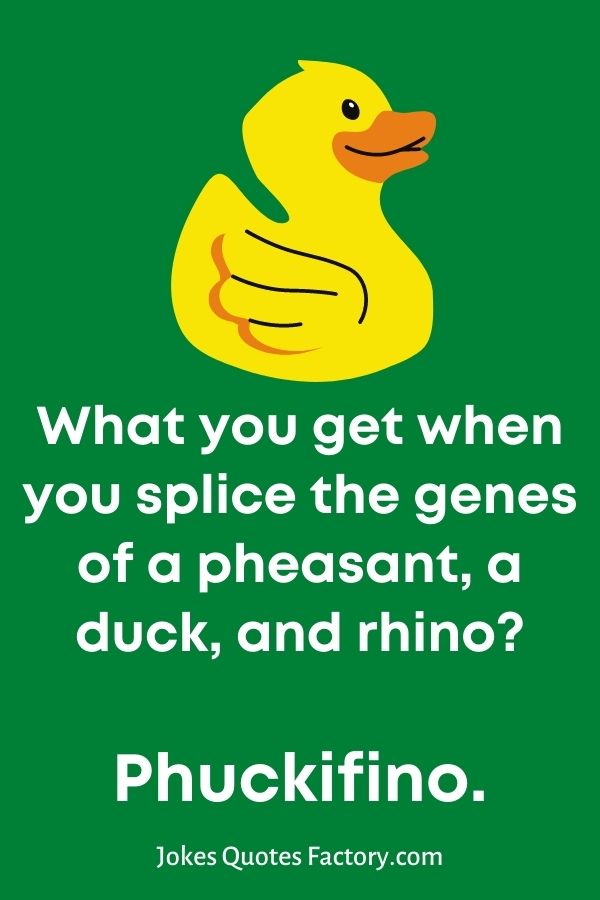 Whats the difference between a large meal you are given and a bird of the cloth?
One’s a present feast and the other’s a pheasant priest

When should you buy a bird?
When it’s going cheep!

Did you hear the one about the crow and the telephone pole?
He wanted to make a long distance caw.

How does a bird with a broken wing manage to land safely?
With its sparrowchute.

Why did the little bird get in trouble at school?
Because he was caught tweeting on a test.

How do crows stick together in a flock?
Velcrow.

What do you call a sad bird?
A bluebird!

What kind of math do Snowy Owls like?
Owlgebra.

Bow hunting is the art of taking down prey by archery. For thousands of years, many hunters have used this strategy as their hunting strategy, and it has continued to be used in modern times for both fun and hunting.

Why didn’t the Mexican go bow hunting?
Because he didn’t habanero. 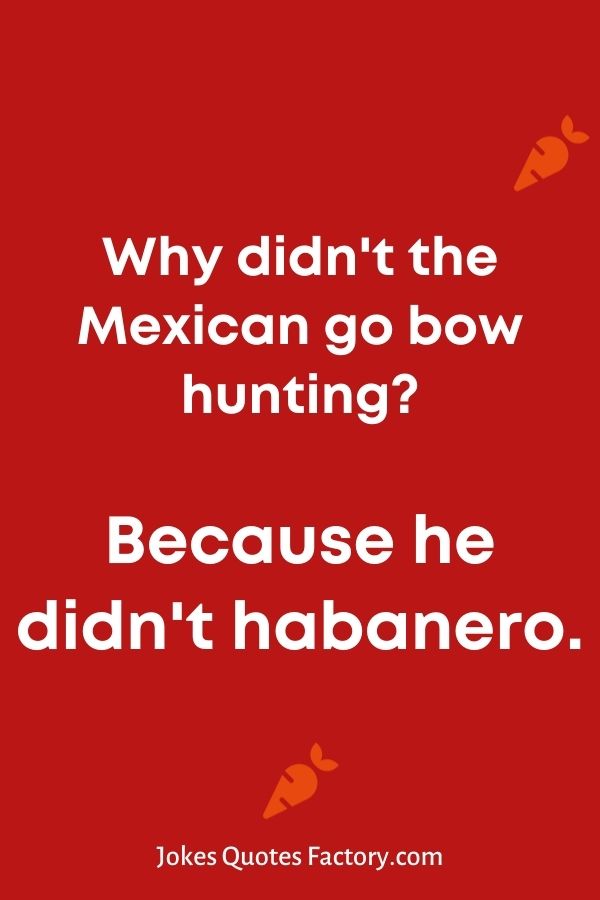 A little girl went bow hunting with her Dad,
and when they found two nice ones she put her hair in pigtails.

Three statisticians are bow hunting in the woods and see a deer…
The first shoots his arrow and misses to the right by three feet.
The second shoots and misses three feet to the left.
The third throws up his arms and yells, “We got him!”

Three mathematicians have known each other for years.
An engineer, a physicist, and a statistician, they decide to go bow hunting one season. While on the trail, they spot their first buck. The physicist run some calculations, decides that air resistance is negligible, and aims accordingly. His arrow falls short by 20 feet. The engineer runs some more calculations, factors in the highest possible air resistance and fires his bow. His arrows flies over the buck and lands 20 feet behind it. Finally, the statistician runs some calculations of his own and excitedly exclaims “We got him!”

Want to see some more laughs? If you’re feeling down, take a peek at these dark hunting jokes for hunters that are sure to boost your mood.

Two men are hunting.
One asks: did you ever hunt bear?
The other one no, but one time I went fishing in my shorts.

Why would be hunting a bald eagle in America be a bad idea?
Because it’s ill-eagle.

Why is there no open hunting season on hippies???
Have you ever tried to clean one. 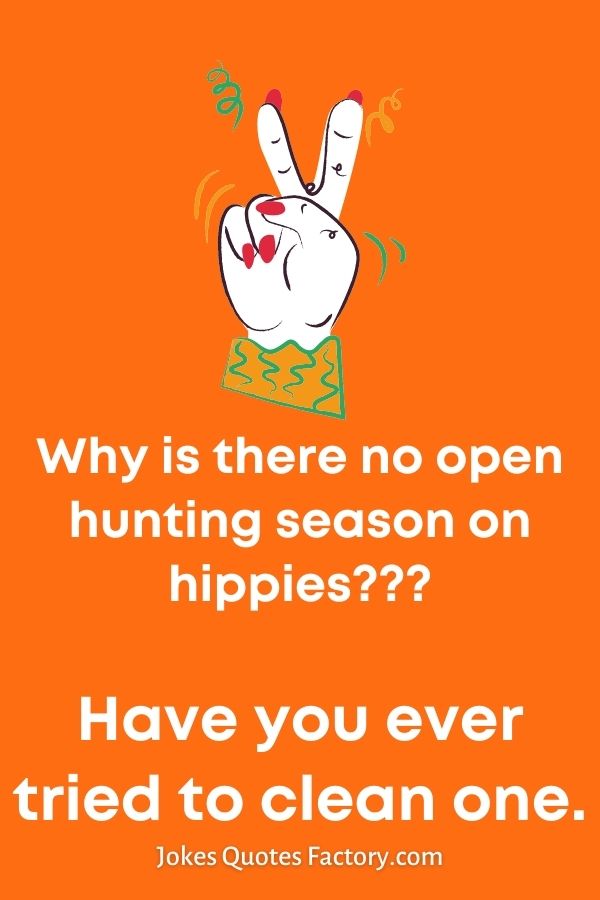 What’s white, black, and red all over?
A zebra who walked into a hunting reserve.

“I’m on a hunt for my wife’s murderer, have been for years.” “Oh my God! Your wife’s been murdered?!”
“No no, you misunderstand. I’m still looking for him.”

Our humorous jokes about hunters will make you laugh till your stomach hurts! Below you will find a collection of smart and amusing hunter jokes that will have you laughing out loud.

What is a hunters favorite game?
Duck Duck Goose.

What do you call a dumb omnivore?
A meathead!

Why is bambi afraid of Christopher Walken?
Because he’s a “Deer Hunter”.

What is the Native American word for vegetarian?
“Poor hunter!”

Did you hear about the Robertsons new movie?
It’s a Duck-umentary! 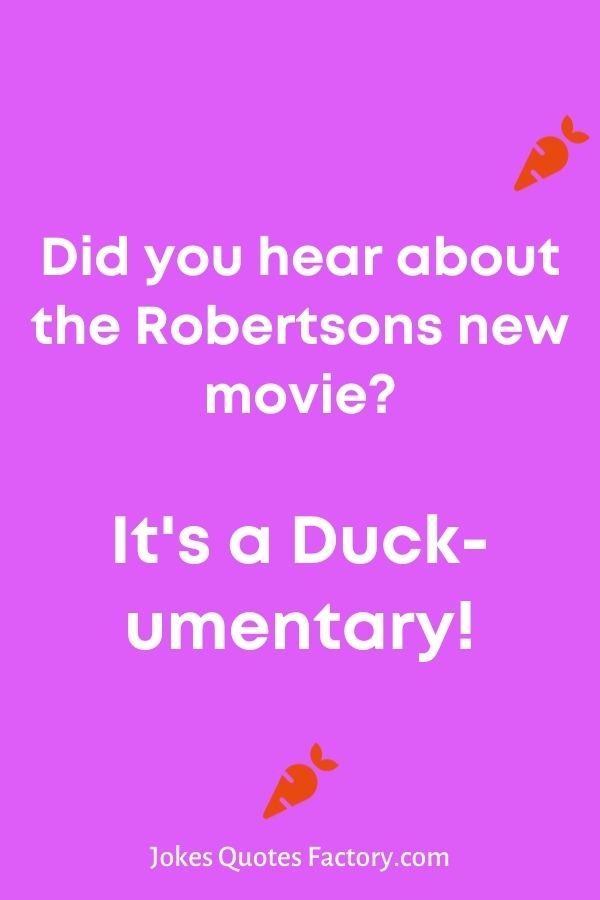 What did the deer tell the hunter?
Buck Off!

What do you get a hunter for his birthday?
A birthday pheasant.

What’s the cheapest type of meat?
Dear balls, they’re under a buck.

Since ancient times, bears have been killed for their flesh and fur. In addition to being a source of food, big game hunters like them because of their size and ferocity in modern times. Take some time to check out our bear hunting jokes for more laughs.

Do you know how a deer saved the bear’s life from hunters that were bear hunting?
He drove the bear away in his car. He had a great command on deering wheels.

What is the favorite tool of an overconfident hunter?
He hunts with his bear hands.

I offered a ride to the bear and asked him where he wanted to go.
He replied saying “As fur as possible”.

The bear wanted a break from work.
He applied for furlough. 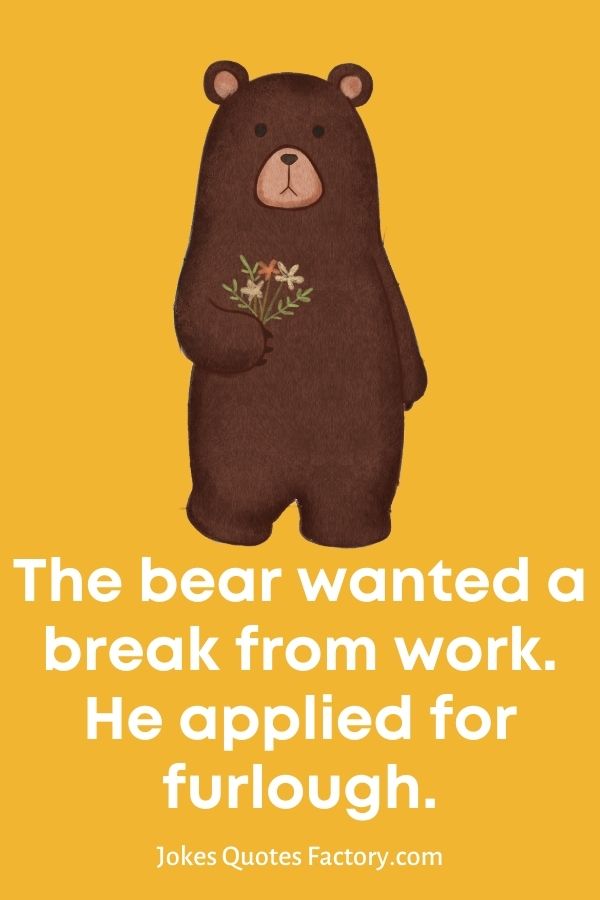 The bear said he wanted to visit a psychiatrist.
He was scared he is bi-polar.

The bear had severe back pain.
The doctor told him it was because of incorrect pawsture.

The bear did not have any fur.
He was bare.

How to catch a kangaroo?
Hire a boundy hunter.

Elite hunters can kill pigeons with a bow and arrow in pitch darkness.
They do it by studying a coo sticks.

My father, the deer hunter, loved to travel.
I still remember his advice. “Go to Venice, son.“

The man who loved hunting was charged with big gamey. 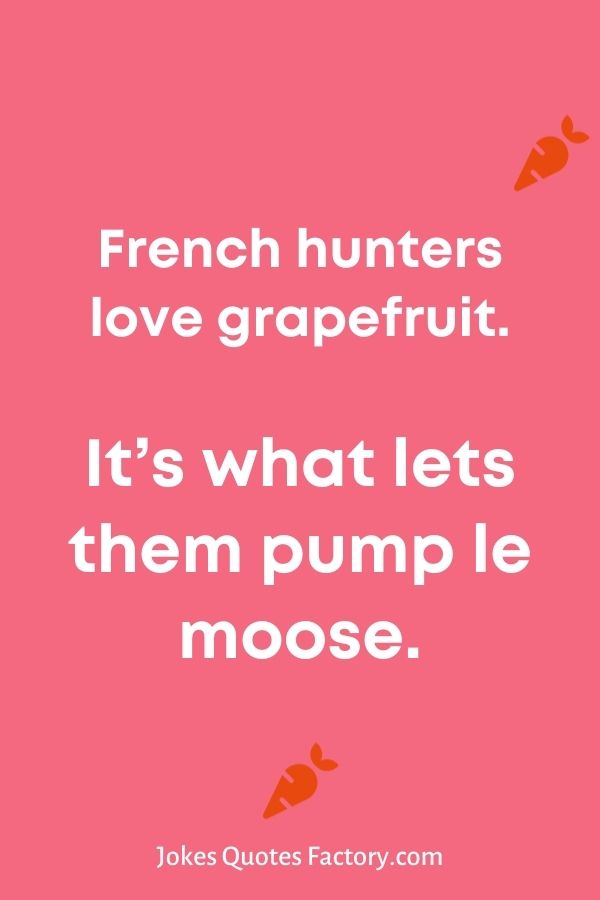 Life is like hunting.
There are no easy antlers.

Careful how you slice up that wild game carcass:
You don’t want to make a big moose steak!

If you hunt aquatic mammals in the arctic, your fate is sealed.

The hard-luck hunter preyed and preyed.

Listed below are some humorous hunting jokes and puns that you may enjoy and giggle at. This is a great game jokes for both kids and adults. Remember to go through our other hilarious jokes as well, as there are many more to choose from.