Brexit has been a tumultuous year for Britain. Many people are still trying to figure out what will happen with Britain leaves the European Union, and it’s left some people laughing. These funny Brexit jokes and one-liners capture the confusion and hysteria in the UK at the time.

The year of Brexit (and the year of Donald Trump) has been chaotic. The results of the EU referendum still seem unlikely after just a few months have passed, and in many ways, it’s hard to believe that Britain has voted to leave the EU.

It’s been a chaotic year since the Brexit vote, and it’s still hard to believe that Britain has voted to leave the EU. The voice in favor of Brexit has created a lot of uncertainty, and the consequences of the UK leaving the EU are still unclear.

What makes Britain so fond of tea?
Because tea leaves. 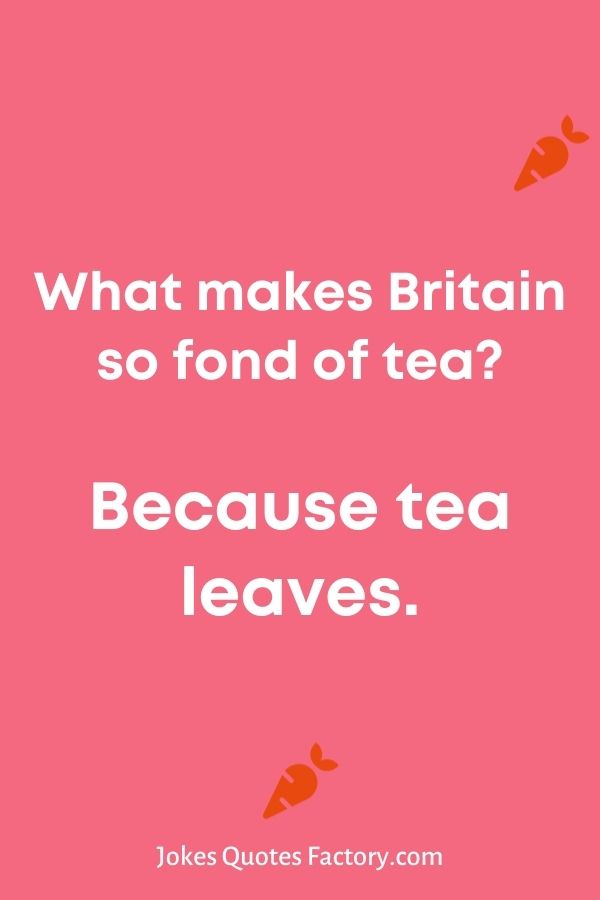 What is the reason for so many children among Brexiters?
Because he refuses to acknowledge that pulling out never works.

To change a light bulb, how many Brits are needed?
None. The Brits are too busy screwing themselves.

What did Britain say to its trading partners?
See EU later

What’s the most frequently asked question after Brexit?
The UK?

What is the number of Brexiteers required to change a light bulb?
One to promise a brighter future and the rest to screw it up.

What is the sexual position of the day?
Brexit, You promise to pull out, but you don’t.

What will Christmas Dinner be like after Brexit?
No Brussels. 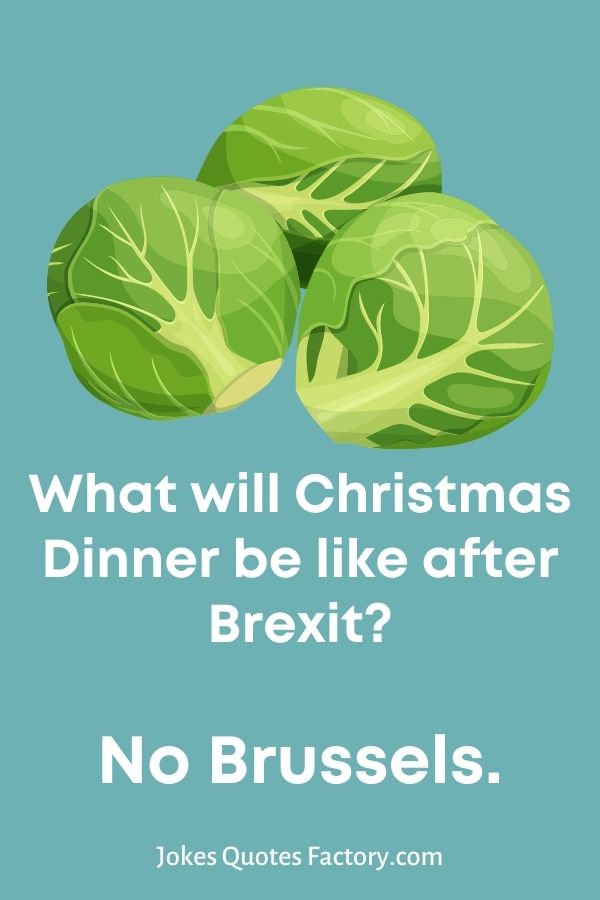 When Boris Johnson sees something he doesn’t like, what does he do?
He Brexit!

There will be a 50p coin commemorating Brexit.
It’s almost done. They aren’t sure what to do about the border.

In the UK, the Cabinet is Her Majesty’s decision-making body…
and it’s made of plywood. (IKEA has better cabinets)

Brexit Beer Deal:
Tell the bartender what you want, and they’ll serve you something else.

The police will no longer use German shepherds after Brexit and will use yoYorkshireerriers.

As a result of Brexit,
I have now removed all German contacts from my phone. I am now Hans free. 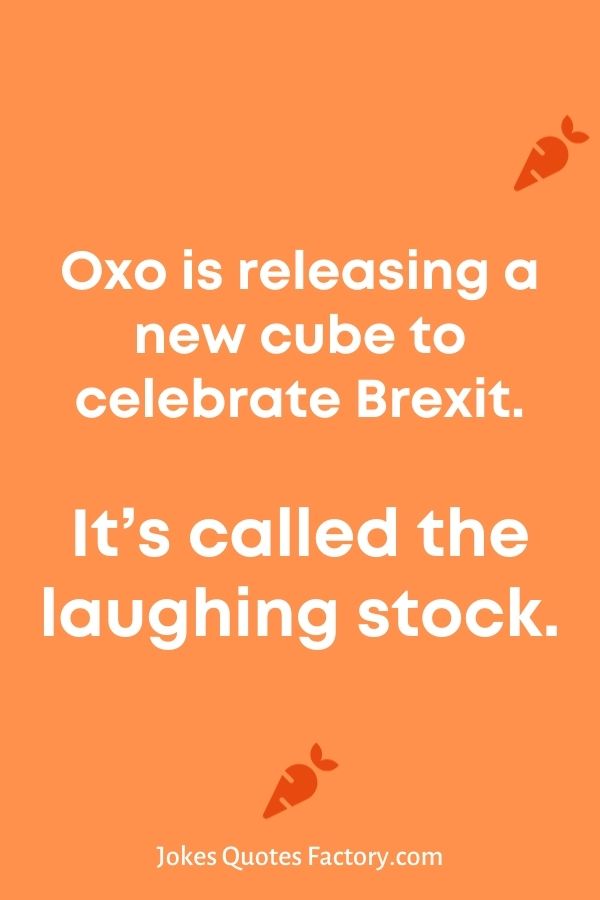 Brexiting (verb);
Pretending to leave the party but staying.

Everyone gets what they want from Brexit.
Brits get blue passports, and the average IQ of the European Union goes up by 10 points.

Even my cats hate Brexit, and he’s a knob.

David Cameron quits as UK prime minister;
Modi invites him to India because his surname is “Camera On.”

It was 1947 that was the best Brexit; nothing can match that.

Brexit:
When the fun stops, STOP. 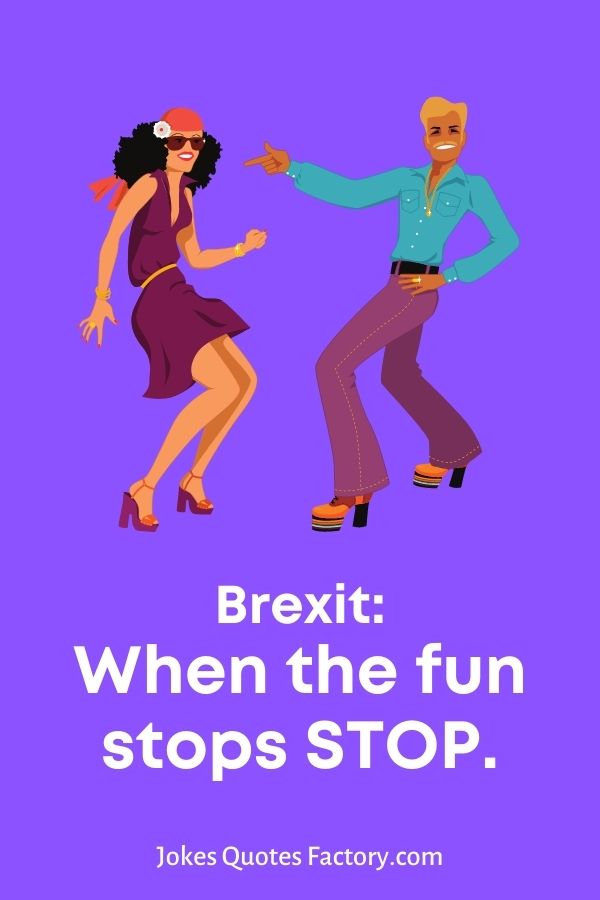 Brexit has caused a lot of confusion and uncertainty, reflected in the funny jokes we’ve collected here.

I regret falling in love with my British girlfriend,
You give your heart to her, and she Brexit into a million parts.

The good news is that I placed a safety bet on Brexit. The bad news is my winnings are in pound sterling.

I’m going to go on a Brexit diet,
The pounds will drop fast.

I named our cat Brexit,
It doesn’t know if it wants to stay or go out.

Due to Brexit this year, May ends in April.

I recently started the new Brexit diet.
So far, I’ve lost hundreds of millions of pounds. 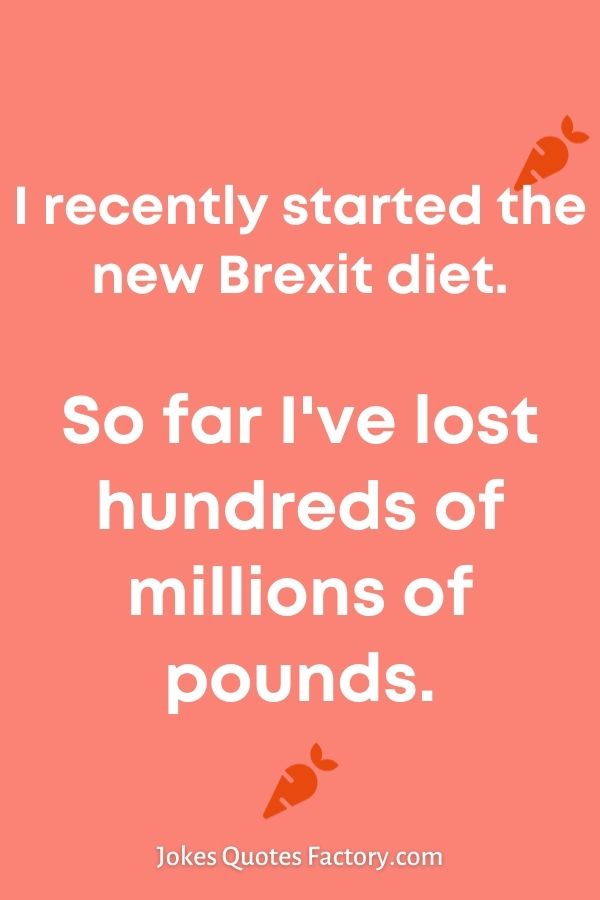 I gave my heart to a girl from Great Britain.
She turns around and Brexit into a million pieces.

May toop in June
..fine I’ll Brexit myself

As a result of the Brexit vote, Britain has suddenly become an island nation. And as everyone knows, being an island means one relies heavily on trade with other countries. The problem is that these nations also have their borders and laws, which make work difficult. Although there are some fun ways people are trying to deal with this situation

The Native Americans were surprised to be colonized by Europeans.
No one expects the Spanish Acquisition.

What did the American say to the Germans urinating in public?
European illegally!

None of my European electronics worked adequately in the US until I prayed to God.
It turns out they just needed a higher power.

How can you tell the God of thunder is European?
He still has his thorskin.

What did the girl say to the hot European?
Czech him out! 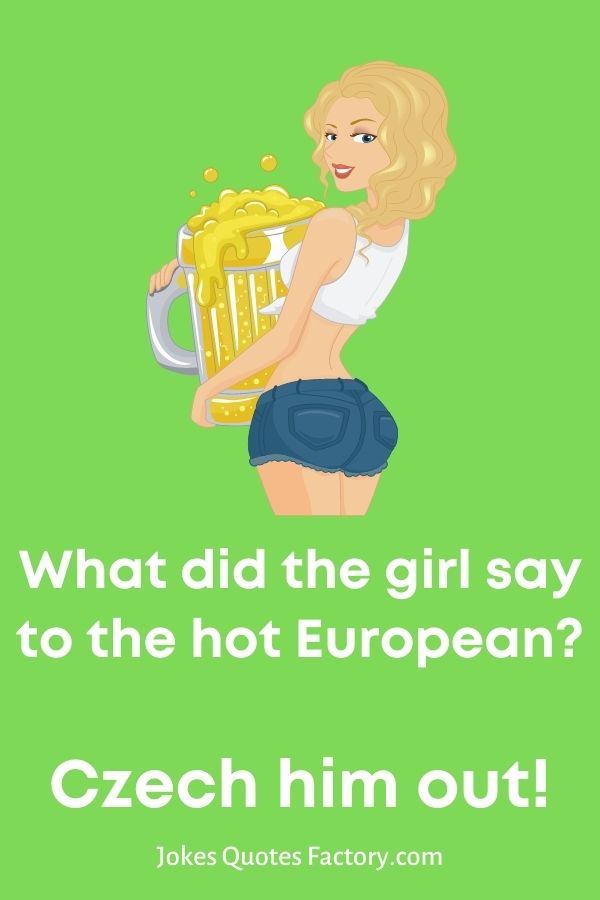 If America is storming Area 51, the Europeans can storm the Vatican.
We’ll take the aliens; you get the predators.

Which European country did Fiona and Shrek go to for their honeymoon?
The Shrek Republic.

Made an Eastern European friend on a chess forum.
He was my Czech mate.

I’m a European frog, primarily French, a bit German, and…
…a tad Pole.

What do you call a person who’s an American culture and politics expert?
A European Redditor.

What joke is the same in all European languages?
The USA. 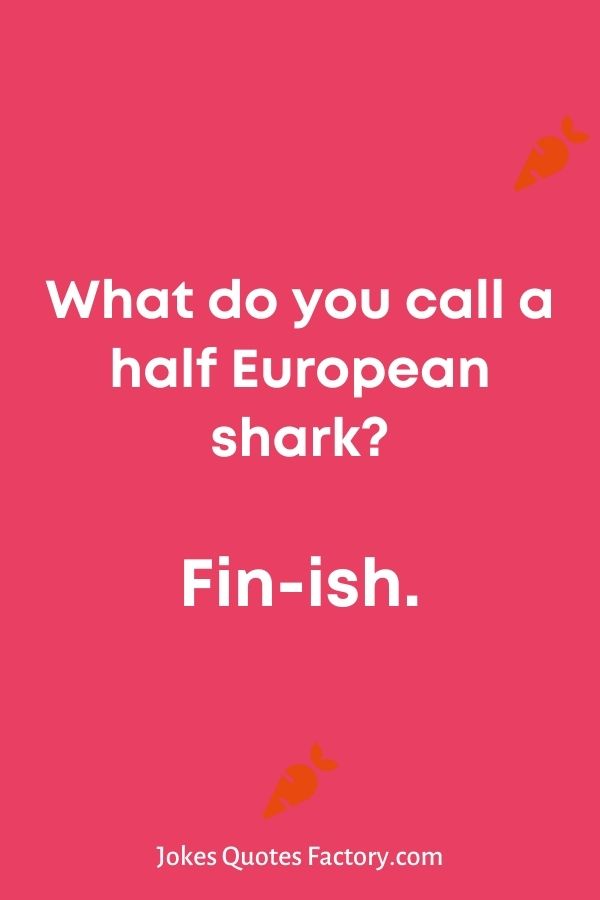 My friend who works as a beautician wants to learn Eastern European languages.
It sounds challenging, but I know she’s going to nail Polish.

I’m developing a gun that shoots east European stew.
I call it the Goulashnikov.

You won’t find many European people with a fetish for feet.
They’re more into meters.

How Do I Know That Eastern Europeans Love Board Games
Because I Have A Czech Mate Who Told Me So.

I just got off the phone with my European friend visiting Buffalo.
He said to make it quick; he’s roaming.

What is a Karen called in Europe?
An American.

What side of the earth was Europeans best at exploring?
Genocide.

I ordered a European cabinet from Wayfair and received a girl instead,
Not what I expected when the description said, Swedish maid.

What does a European person say when they see something nasty?
EU.

Do Europeans have a foot fetish?
No, they have a centimeter fetish.

How do you commit a hate crime against a European?
Make their food spicy

How do Europeans smile?
Skilometer

What is an Eastern European’s favorite food?
Coleslav

Why do European submarines have barcodes?
So when they get to port, they can be Scandinavian.

When you have to go to the bathroom, you become a Scandinavian
First, you’re Russian there, then European, and then Finnish.

Political jokes are great for any occasion and artfully crafted to get a laugh out of whomever you tell them to. No matter your political affiliation, there is a laugh in this room for everybody.

What’s the difference between a politician and a flying pig?
The letter F.

Why is England the wettest country?
Because so many kings and queens have been reigning there.

What do you get when you cross a corrupt lawyer with a crooked politician?
Chelsea Clinton.

Who is the leader of the Kitty Communist Party?
Chairman Meow.

Monica Lewinsky didn’t vote for Hillary Clinton in this election.
She said the last Clinton presidency left a bad taste in her mouth.

What should the vaccine’s trial on politicians do first?
If they survive, the vaccine is safe; if they don’t, the country is safe.

How do politicians wrap presents?
With lots of red tapes.

What do seniors trust less than politicians?
Farts.

What’s the difference between a politician and a crook?
No, seriously, I can’t tell.

Why are there only two pallbearers at a politician’s funeral?
There are only two handles on a trash can

Why did the politician cross the road?
Because he said he wouldn’t

What’s the similarity between a unicorn and a good politician?
Neither exists

Do you know what we would call ‘COVID-19’ if the first ten thousand people killed were politicians?
A good start.

Which politician is the biggest supporter of statistical sciences?
Putin. He loves the Poisson distribution.

How many politicians does it take to change a lightbulb?
None. They will never allow change, even if it makes the world brighter.

What do you call a lawyer with an IQ below 70?
A politician.

Racism seems to be the rule rather than the exception in the twenty-first century. It’s hard to imagine that people would have found racial jokes funny in the past. Many racist jokes can be converted into moron ones. When it comes to racial jokes in Poland, however, it should be noted that there aren’t many of them.

An Englishman, a Scotsman, and an Irishman walk into a bar.
The Englishman wanted to go, so they all had to leave.

Why do we need any color passport?
We should be able to shout, “British! Less of your nonsense!” and stroll straight through.

With Britain leaving the EU, how much space was created?
Exactly 1GB.

How did the Brexit chicken cross the road?
I never said there was a road. Or a chicken.

Why are European cars the lightest?
Because no Americans are sitting in them.

Knock knock
Who’s there?
Brexit
Brexit who?
I am not sure I can help tell you that; work it out yourself.

Although these jokes make light of the Brexit situation, they still represent a genuine concern for many British (and European) citizens. The UK is scheduled to leave the EU in 2019 formally, and there are still more questions than answers about what will happen in the future.

That’s why we’ve put together this list of funny Brexit jokes that perfectly capture the general attitude towards Brexit in the UK. Whether you’re a fan or a resident of the other side, you’ll likely find something here to make you laugh. And even if you don’t find yourself relating to any of these funny Brexit jokes, you may get a good sense of where people are coming from on both sides of the debate.