Happy hour is what you need after a long, tiring, stressful day at work! It is also a good way to catch up with friends and meet new people. But don’t go to the bar just yet without going through our collection of the best bar jokes. You will surely laugh so hard with our jokes, especially the classic a guy walks into a bar jokes.

Come along and get drunk with these intoxicatingly funny jokes about bars.

For sure you will also love our hilarious beer jokes, so you better check it out.

Are you meeting someone at the bar and thinking of some way to break the ice? How about you learn some new jokes about bars? Go crazy and have so much fun with our funny bar jokes. Surely, you won’t regret it.

A rabbi, a priest, and a Lutheran minister walk into a bar.
The bartender looks up and says, “Is this some kind of joke?” 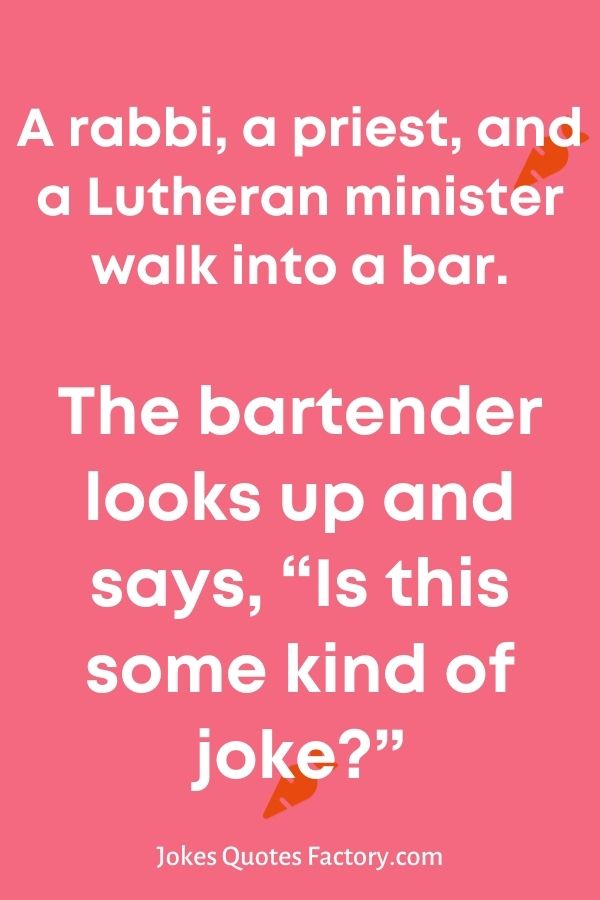 This cowboy walks into a bar.
His hat is made of brown wrapping paper.
His shirt and vest are made of waxed paper.
And his chaps, pants, and boots are made of tissue paper.
Pretty soon they arrest him for rustling.

A lion walks into a bar and asks the bartender, “Do you have any jobs?”
The bartender shakes his head sadly and says, “No, sorry. Why don’t you try the circus?”
The lion replies, “Why would the circus need a bartender?”

A guy walks into a bar and yells, “All lawyers are assholes.”
The man at the end of the bar says, “I object to that remark.”
The guy responds, “Why? Are you a lawyer?”
“No, I’m an asshole,” says the man.

A polar bear walks into a bar and says to the bartender: “I’ll have a Gin and… Tonic.”
The bartender asks, “Why the big pause?”
And the polar bear replies, “I don’t know, I’ve always had them.”

A Man Walks Into A Bar Jokes

These classic jokes are worth your time! Every bar-goers should check this collection of man walks into bar jokes for your amusement.

A horse walks into a bar.
The shocked bartender points a finger his way in alarm and yells, “Hey!”The horse says, “You read my mind, buddy.”

A dyslexic man walks into a bra…

Two scientists walk into a bar.
One says, “I’ll have an H2O please”

E-flat walks into a bar.
The bartender says, “Sorry, we don’t serve minors.”

Two dragons walk into a bar.
One says to the other, “It’s hot in here.”
The other snaps back, “Shut your mouth!”

The past, present, and future walk into a bar.
It was tense.

A neutron walks into a bar and orders a drink.
When the neutron gets his drink, he asks, “Bartender, how much do I owe you?”
The bartender replies, “For you, neutron, no charge.”

Two jumper cables walk into a bar.
One of them says “We’d like a couple of beers, please.”
The bartender says “Okay, but don’t start anything.”

Three fonts walk into a bar.
The bartender looks up and says, “We don’t serve your type in here.” 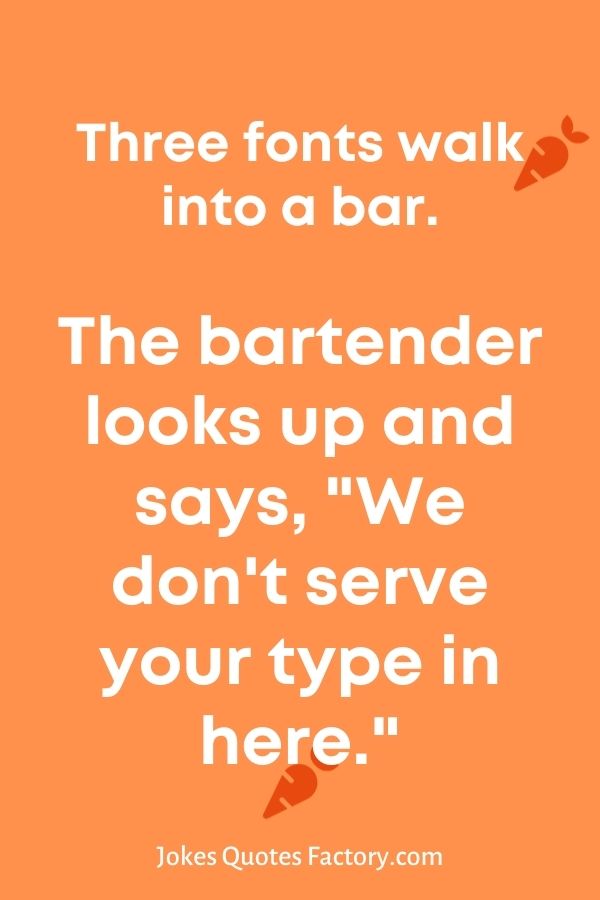 Two termites walk into a bar.
One asks, “Is the bar tender here?”

Why did the woman bring a ladder to the bar?
Because she heard the drinks were on the house.

ƒ(x) walks into a bar.
The bartender says, “Sorry, we don’t cater for functions.”

A penguin walks into a bar.
The bartender says, “So what will it be this time?”
The penguin doesn’t answer because it’s a penguin.

A weasel walks into a bar.
The bartender says, “Wow I’ve never served a weasel before, what can I get you?” “Pop”, goes the weasel.

A man walks into a bar owned by horses.
The bartender says, “Why the short face?”

A sandwich walks into a bar.
The landlord says, “Sorry sir, we don’t serve food here.” 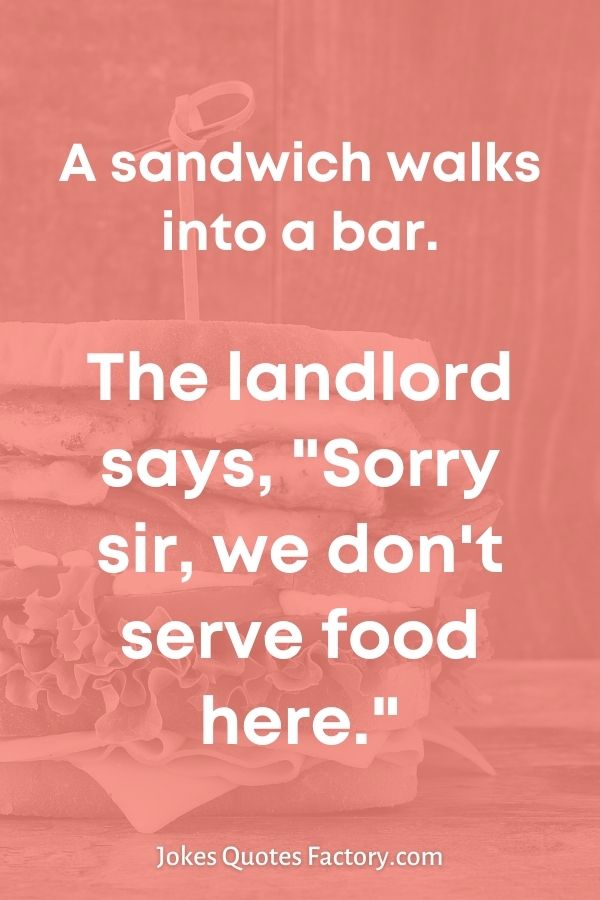 A tennis ball walks into a bar.
The barman says, “Have you been served?”

A corn stalk walks into a bar.
The bartender says, “Want to hear a joke?” The corn stalk replies, “I’m all ears!”

A guy walks into a bar with a piece of asphalt under his arm.
He asks for one beer, and one for the road.

So a five-dollar bill walks into a bar, and the bartender says,
“Hey. This is a singles bar.”

Two guys walk into a bar.
The third one ducks.

Drinking too much is not good for you but drowning yourself in our amusing bar jokes is another story! These short bar jokes for adults are easy to remember, and the drunk you will share it over and over again.

Why didn’t the bartender serve the snake?
Because he couldn’t hold his beer. 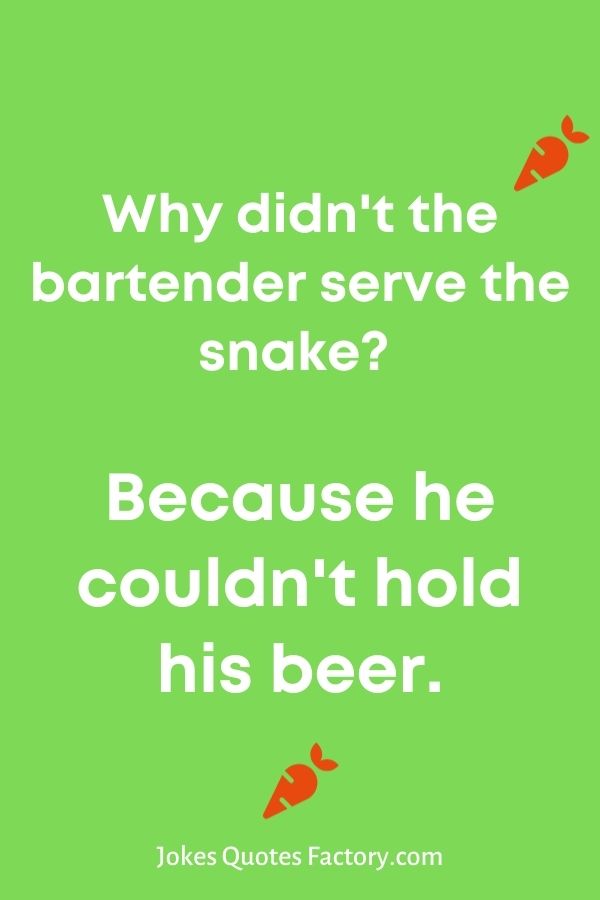 What do two condoms say when walking past a gay bar.
Wanna go get shit-faced?

Four gays in the bar and only one stool. What do they do?
Turn it over!

What does a termite say when he walks into a bar?
Is the bartender here?

What did the Bartender say when two jumper cables walk into a bar.
You guys better not start anything in here.

Who doesn’t want comedy? We need jokes from time to time to feel good about ourselves. The thing is, not all are born comedians, but we can help you with that. This list of comedy bar jokes is a great help if you want to learn some new tricks off your sleeves.

I went thirsty at the comedy club.
The punch lines were terrible! 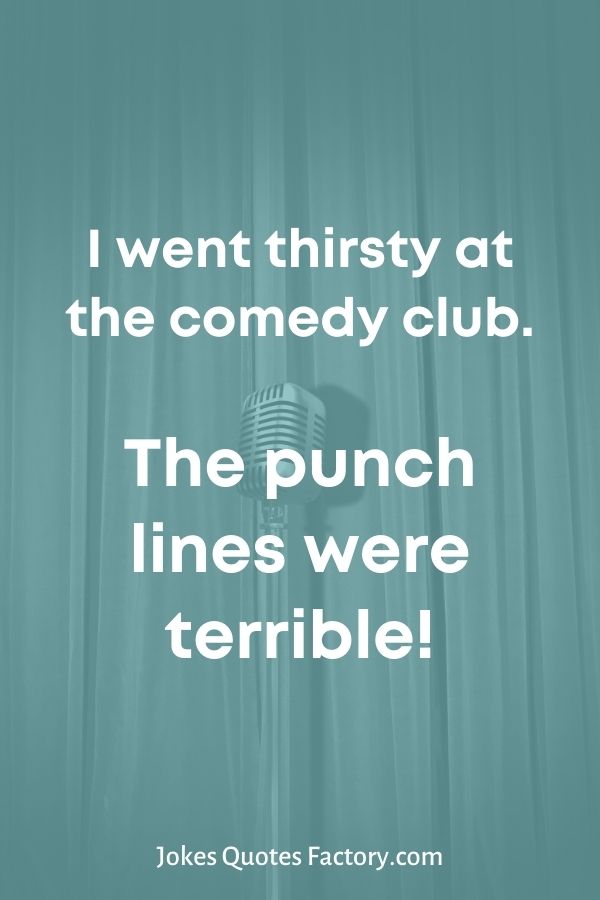 Why did the cannibal bring his silverware to the comedy club?
He heard there would be an open mike.

What did the comedy club proprietor say to the FedEx guy?
The jokes are ok but you need to work on your delivery.

Due to the lack of space, the city morgue and the comedy club will be in the same building
This Friday is open Mike night.

When do sweet potatoes like to go to the comedy club?
Yamateur hour.

I was at a comedy club in Russia last month and saw a decent stand-up routine making fun of Putin.
I didn’t love the guy’s jokes, but he had great execution.

Did you hear about the unprofitable chain of comedy clubs that went public through an IPO?
It has now become the laughing stock.

What did the audience say about the virologist’s set at the comedy club?
He had an infectious sense of humor but needed to work on telling his jokes at a less feverish pace.

What is it about beers and gins that makes people do some wordplay? Our clever bar puns will drive you nuts! Bottoms up as you scroll through our list! Share them, and everyone will love you for it!

What does a man who walks into a bar with a roll of tarmac under his arm say?
Pint please, and one for the road.

I just found out I’m colorblind.
The diagnosis came completely out of the purple. 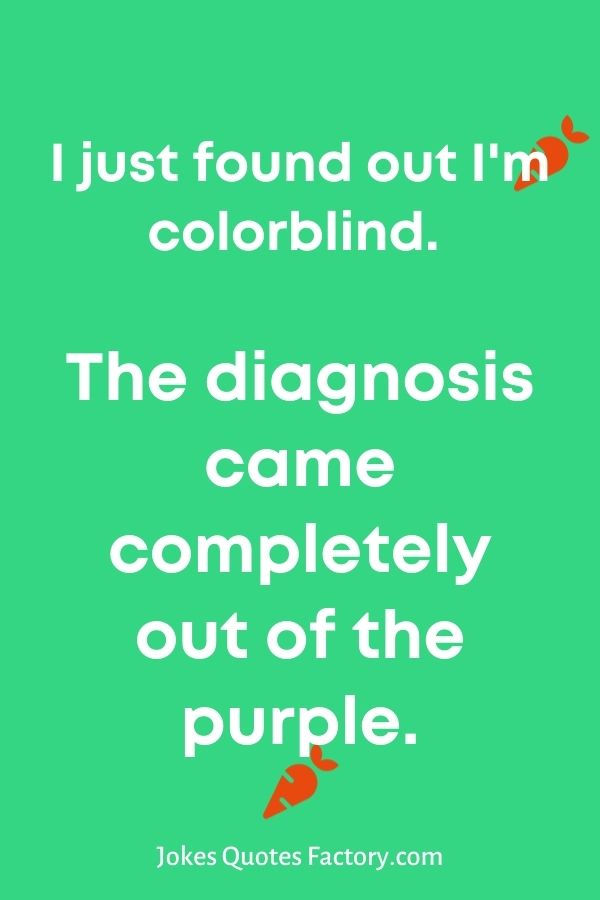 You won’t drink away the alcoholism.

A doctor tells a woman she can no longer touch anything alcoholic.
So she gets a divorce.

Alcohol is a perfect solvent: It dissolves marriages, families and careers.

Going to a bar is a good idea until you are confronted with an uncomfortable quiet. A clever joke is a terrific way to break the ice, whether you’re out on a first date or hanging out with pals. Feel free to get one of these jokes and crack it around the bar, and you’ll see the change of the atmosphere, from boring into a fun one!