Army, military, and navy jokes have long been a staple of American humor. With the armed forces making up one of the largest sectors of our economy, it’s little surprise that there has been a long tradition of this type of entertainment. The army is made up of real human beings, after all, with humorous stories and circumstances often going hand in hand with the service that they provide for us as a nation.

Funny Army Jokes can be found almost anywhere. You can hear them in the din of any barracks in the United States. You will hear endless jokes about the military and its brash style of humor among those who have served or are serving. Whether or not you find this funny army jokes funny really depends on your personality, and how you take humor.

Are you looking for funny military jokes to liven up your day? I guarantee these will make you laugh. Some of us look forward to those early morning wake-up calls, while others can’t wait to get home after a long day at work. It’s all about the different personalities and outlooks we each have.

I once heard about a general that retreated from a Navy fleet that was wearing sandals. He was scared of de-feet.

An army of dragons destroyed and consumed everything in their path. It was the arma-dragon. 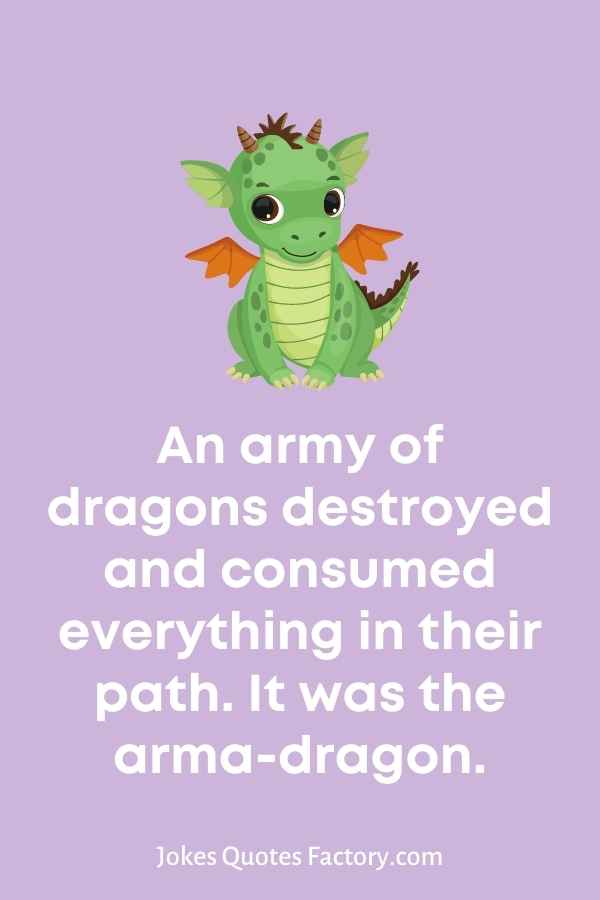 The first thing that the pigs learn when they join the Army is ‘ham to ham combat’.

The veteran who became a volleyball coach told his students that the most important skill is knowing how to serve.

The Roman Army never actually fell. They all moved to our nearest star system instead. They just became Alpha Centurions.

When my friend was in the Army, Chieftain used to be a rank and not a tank. 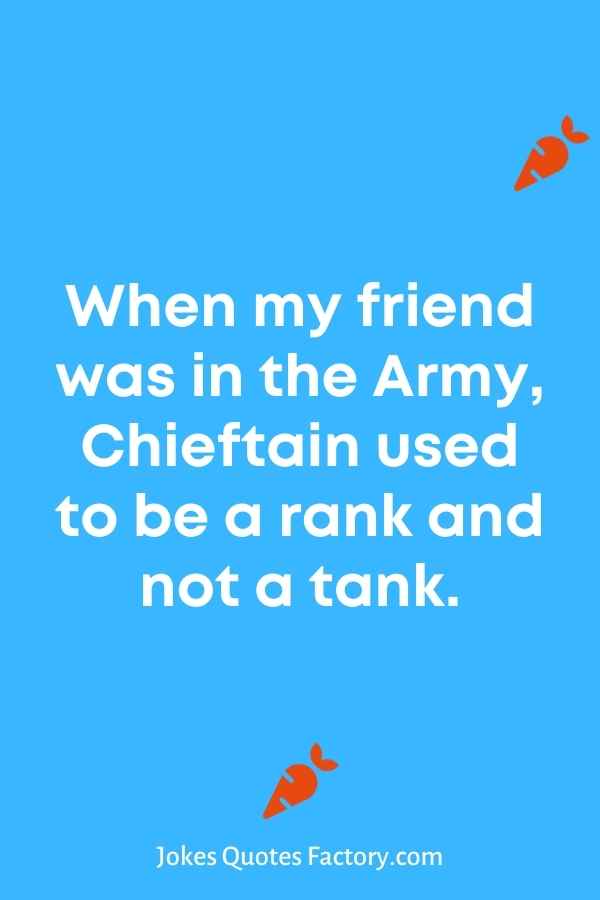 My instructor told me that he never saw me at the camouflage practice. I replied, “Thank you, sir!”

A man who survived pepper spray and mustard gas later joined the Navy. I guess he is a seasoned veteran now.

If you feel like you are not being thanked enough in the army, don’t worry about it. Cavalry officers never say tanks.

I used to be an artist before I joined. Afterward, they told me I’d never be an officer. Probably because I always kept drawing fire.

My friend recently got promoted from captain to a higher rank. I’m sure it was a major day for him. 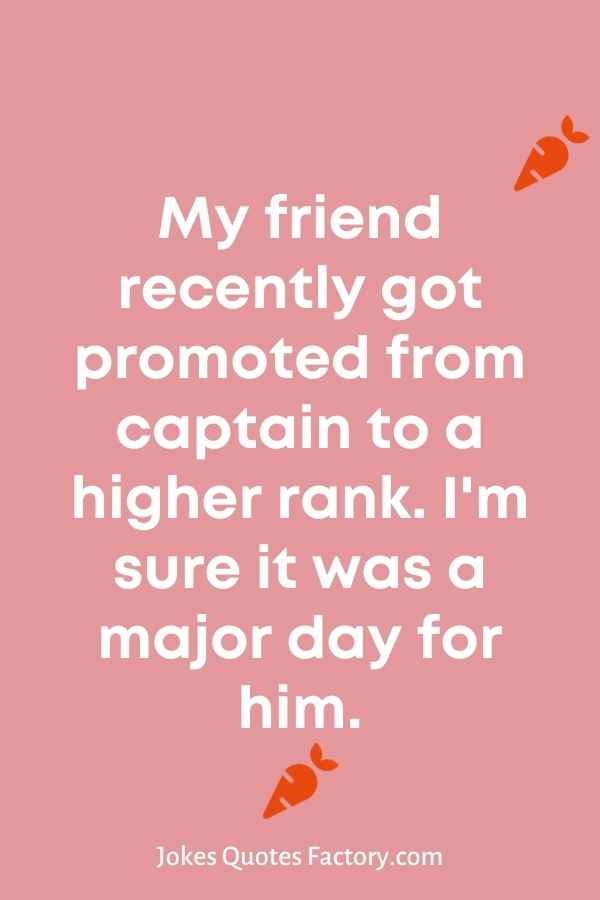 Attila and his army saw some strange otherworldly ships over their battlefields. It’s said these were ‘Hun Identified Flying Objects’.

The US navy decided to attack Turkey one day, probably because it was the day of Thanksgiving.

A soldier in Egypt was eating ice cream while he was quitting the Army. He was clearly a dessert-er.

The soldiers once raided the home of a rebel from the Middle East. It turns out he kept his CDs In Iraq.

A writer should be comfortable joining the Navy because he is already familiar with magazines. 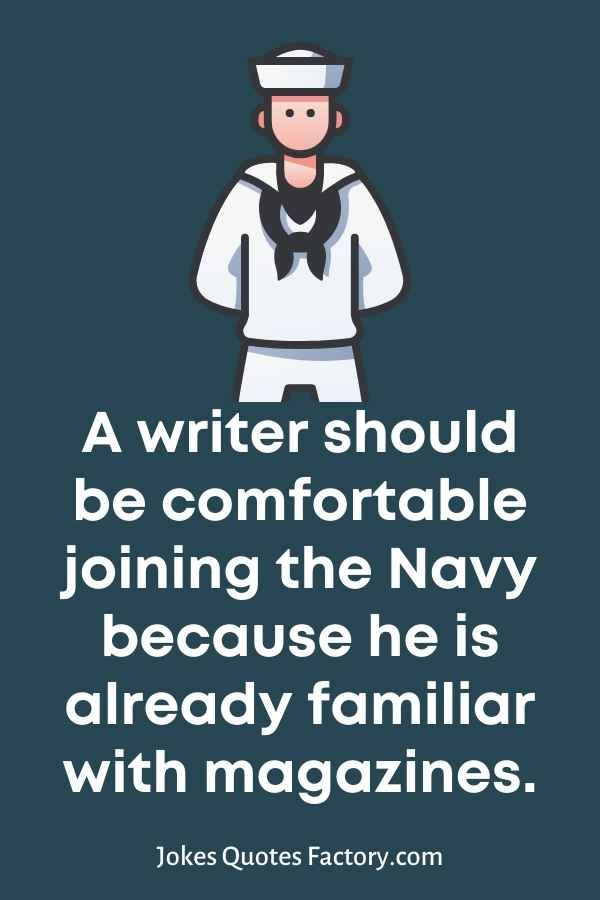 Brooms can be great army officers since they can easily perform good sweeps.

People who wear sleeveless shirts in the Army defend their right to bare arms.

I once got both my arms shot off when I was serving. But I shouldered on.

I once heard a story about a Roman army that became famous after selling milk products to people. It was Legion Dairy.

I once heard that the German soldiers only ever liked one specific kind of pastry. It was the luft-waffle.

There was once a medieval horse that joined the Army. Everyone called it a knight-mare. 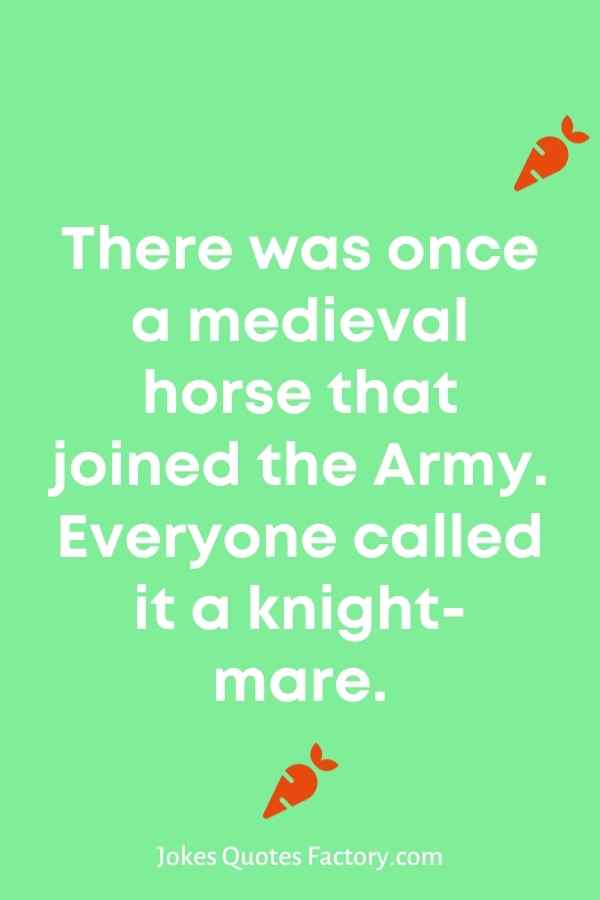 The stupid branch is the army probably is the Knavies.

One day, I sent my baby one day to the Army. They put her in the infantry.

When the man told the emperor that they had 385 volunteers, the Lord told him to round them up. He just replied in return, “Okay. 400, my liege.”

Yes, these are funny army jokes. Enjoy them, share them, and laugh with friends over a slice of cake – sorry! Joke!

What did the soldier say when he forgot something?
He shouted, “Ah shoot.” 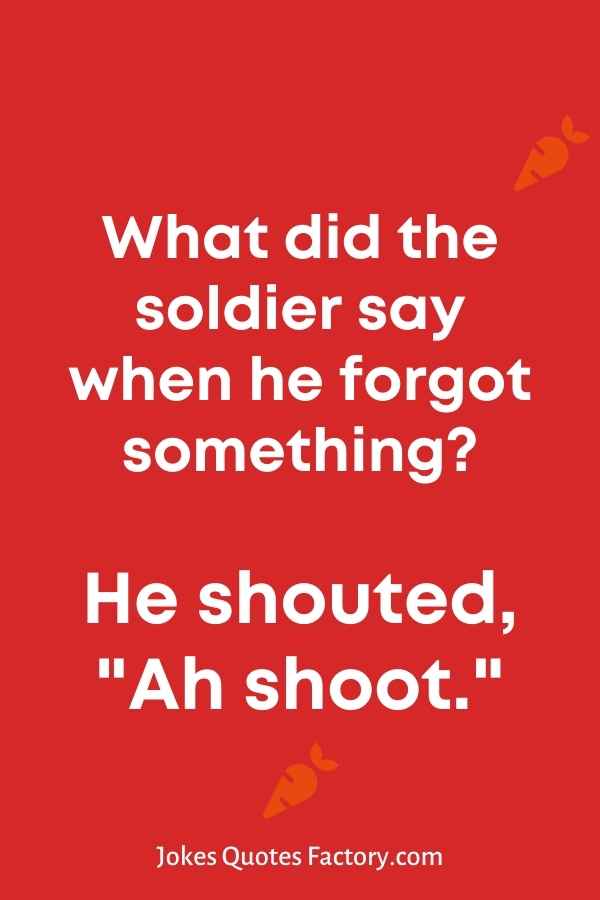 Why did the soldier decide to cut a hole in their carpet?
Because he wanted to watch a floor show.

What form does everyone in the Army have?
The uniform.

Why did the soldier keep dynamites in his trunk?
So that if needed, he’d have it handy to blow up his tires.

What did the soldier say before he started dancing?
He said, “Battle, Buddy! Please cover me when I move!”

What should someone say if an enemy soldier hands them something?
They should say, “Flank you”. 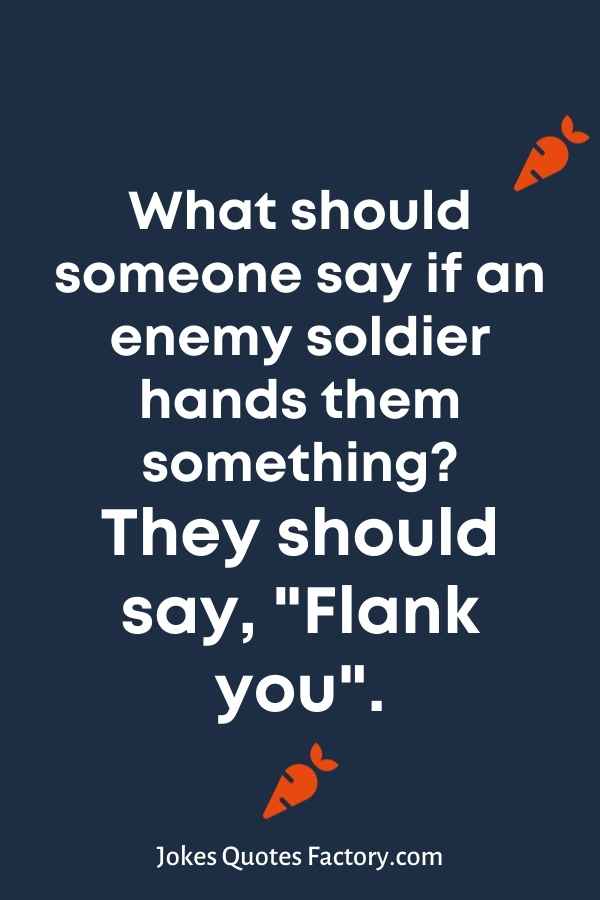 What would you call a plan which stinks in the Army?
The OPODOR.

Which place on an army base needs the most cleaning up?
It’s the Mess hall.

How do soldiers say goodbye?
They say, “Chow.” 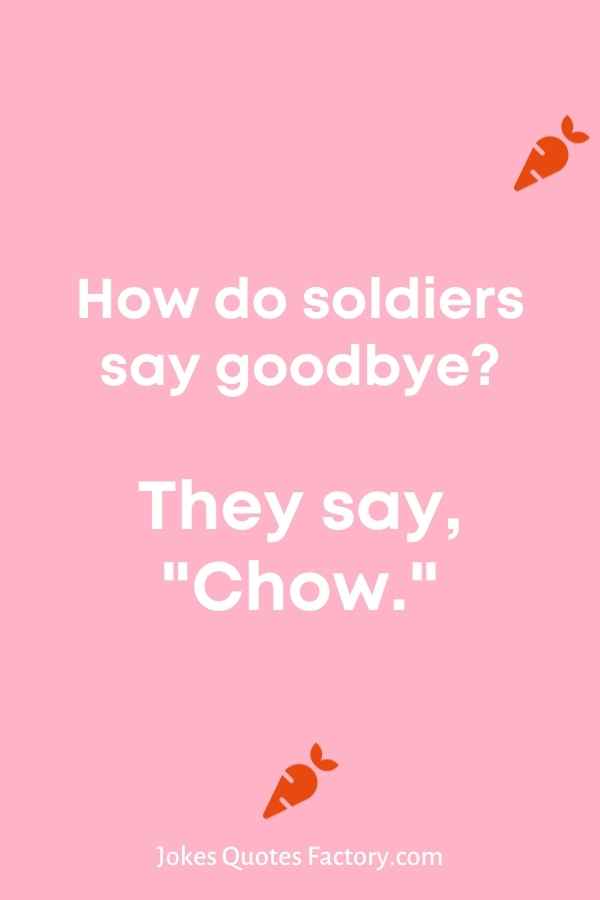 What would you call it if a soldier leaves to go to play some game?
That’d be called a deplayment.

How do you recognize it if a soldier has made some chocolate chip cookies?
When there are a few M&Ms shells scattered on the floor.

What do all the soldiers like watching?
The LMTVs.

What would you call a soldier who makes you stay beside them at all times?
They’d have to be the company commander.

What do the soldiers read whenever they get bored?
A magazine. 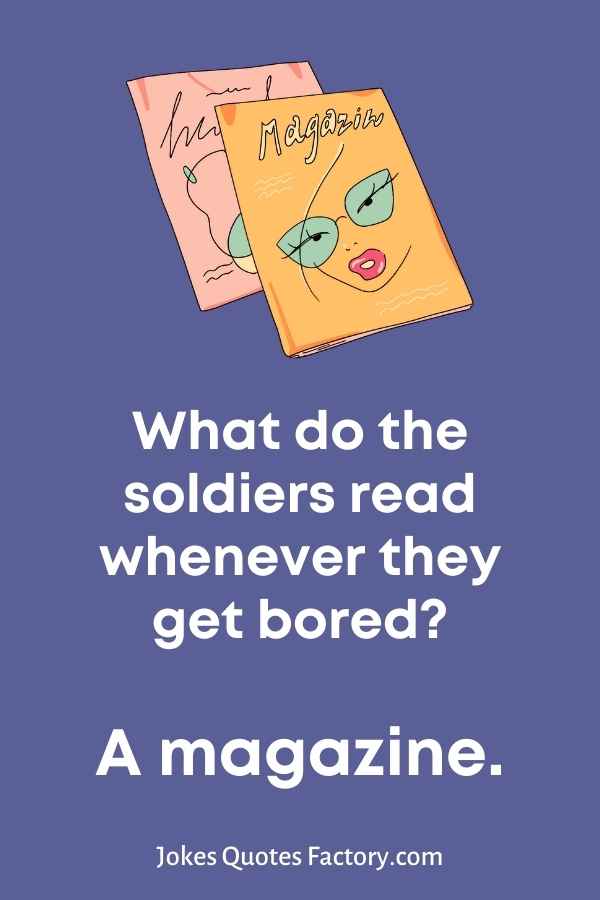 What would you call a gun that is loaded with ammo?
It’d be a ri-full.

What military branch is the favorite of the horses?
It’s the Neigh-vy.

What kind of sergeant usually carries a long stick along with them wherever they are going?
The Staff Sergeant.

Where do the kings put their armies?
In their sleevies. 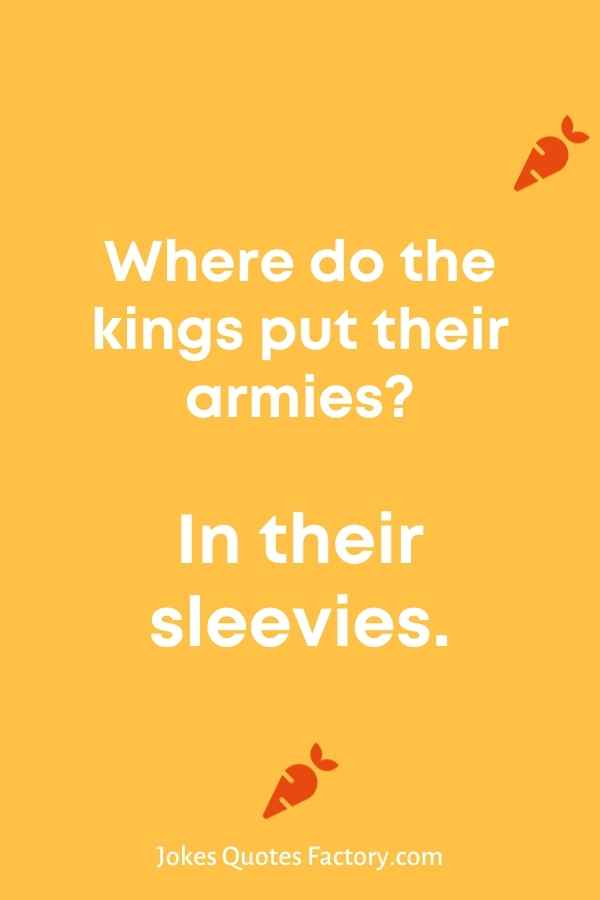 What do the army lions make sure to carry?
A meat wagon.

How do army soldiers greet each other when they ride in helicopters?
They say helo!

Why didn’t the soldier raise his hand when the sergeant asked for the laziest man for a comfortable job?
Because he said, it was too much trouble to raise his hand.

Who is the most noteworthy group in the Army?
They’d be the specialists. 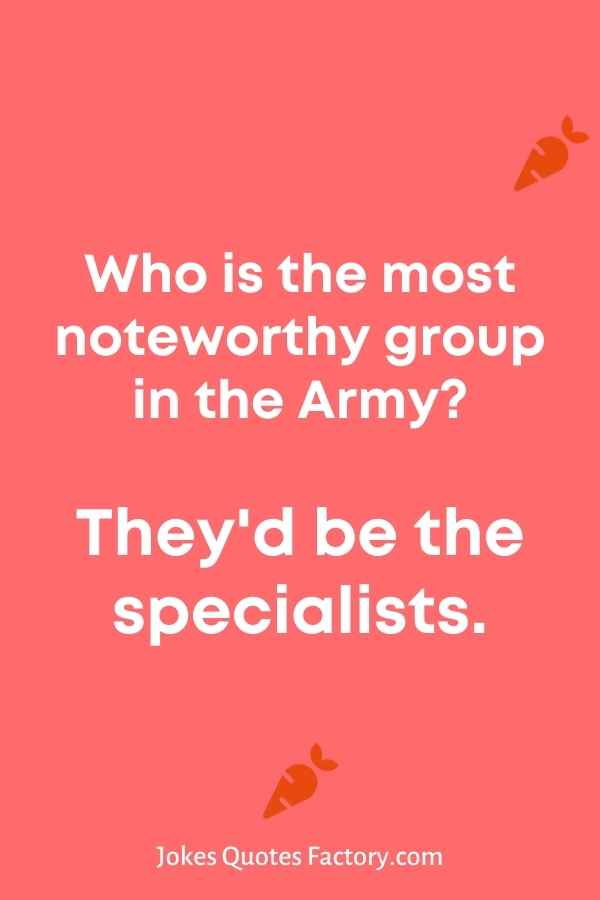 How do the soldiers freshen their breath?
They do it with a tic attack.

What would you call the camera of a soldier?
Cam-o.

How can you make the eyes of a soldier light up?
You just shine the flashlight in their eyes. 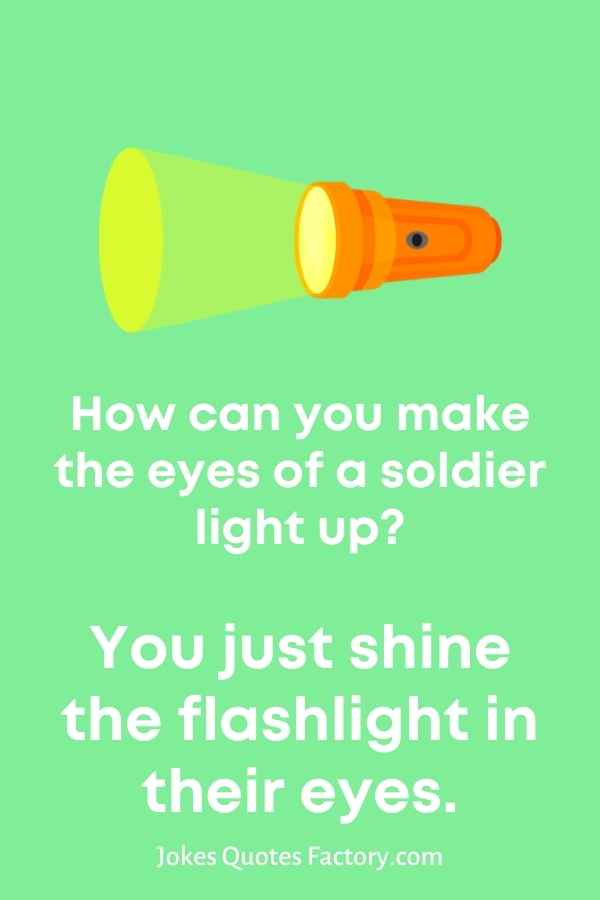 Did you hear about the man that shared a rented property with another man in the Army?
He took the right half, and the army man was the left tenant.

What did the octopus say when a recruiter asked if he wanted to join the Navy?
He said, “No, thanks. I have enough hands on deck.”

What would you name ten captains?
They’d be Capten.

What was the soldier doing in the restroom?
His doody. 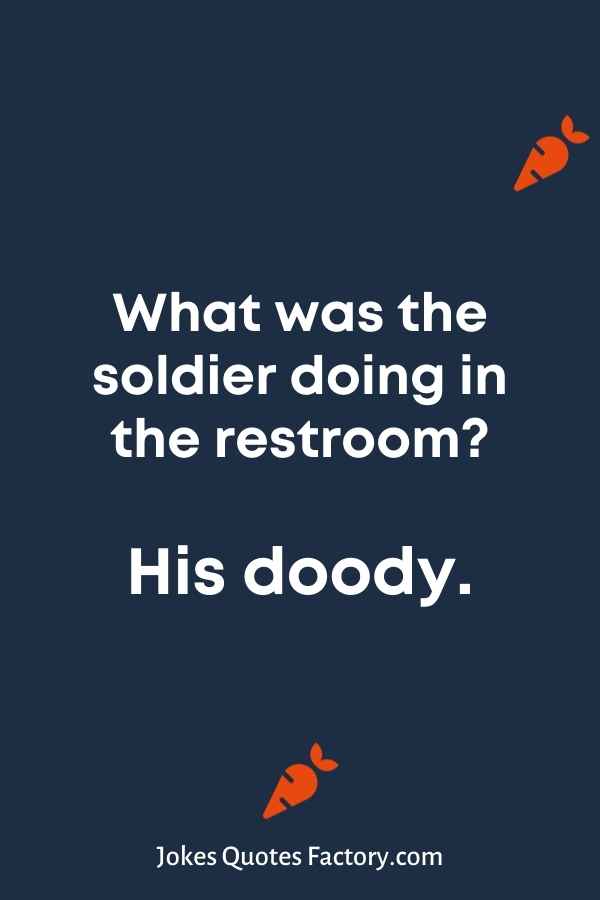 What would you call the Private if they get exposed?
The Public.

What would you say if a stranger Ranger tries talking to you?
Ranger Danger.

What would you call the soldier who’s good at caring for animals?
A vet.

What is the main similarity between the army and musical composition?
They both have majors. 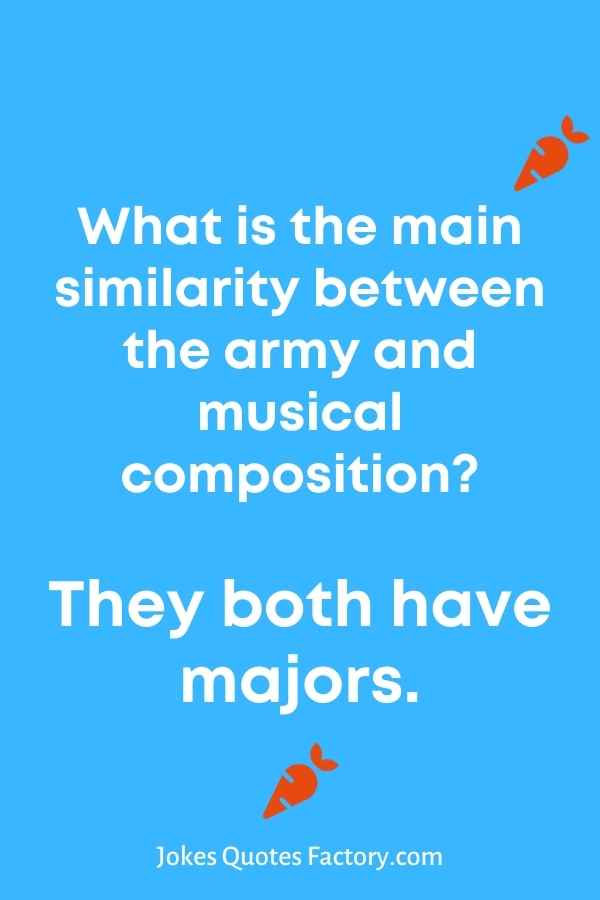 What would you call it if a soldier saves something?
It’d be in the reserves.

What would you say if a soldier accidentally put some horrible paint on the left side of his face?
He has a great Right Face.

How do the soldiers move when they want to get an orange slice?
In a wedge.

What impresses me the most is they don’t take themselves seriously. Laughter and humor can be very effective tools against stress and pressure, not to mention things that scare us. When you add humor to a difficult situation, it allows people to relax. This helps people deal with stressful situations more effectively, reduces tension and anger, gives soldiers an emotional release from the stress of combat, and develops closer relationships among people who work together in a stressful environment.